-GOLD QUARTERLY- I often get asked If I believe the 3+ year correction is over in Gold and Silver. To me, a confirmation that the Bull market has resumed will be a close above the 10 Quarter Moving average. In the chart below you’ll see how Gold closed above the 10 (EMA) in 2001 & 2002, then didn’t close below it again until 2013. Currently, the average is @ $1,299, and I don’t think we will make it this quarter but It is something we are closely watching. 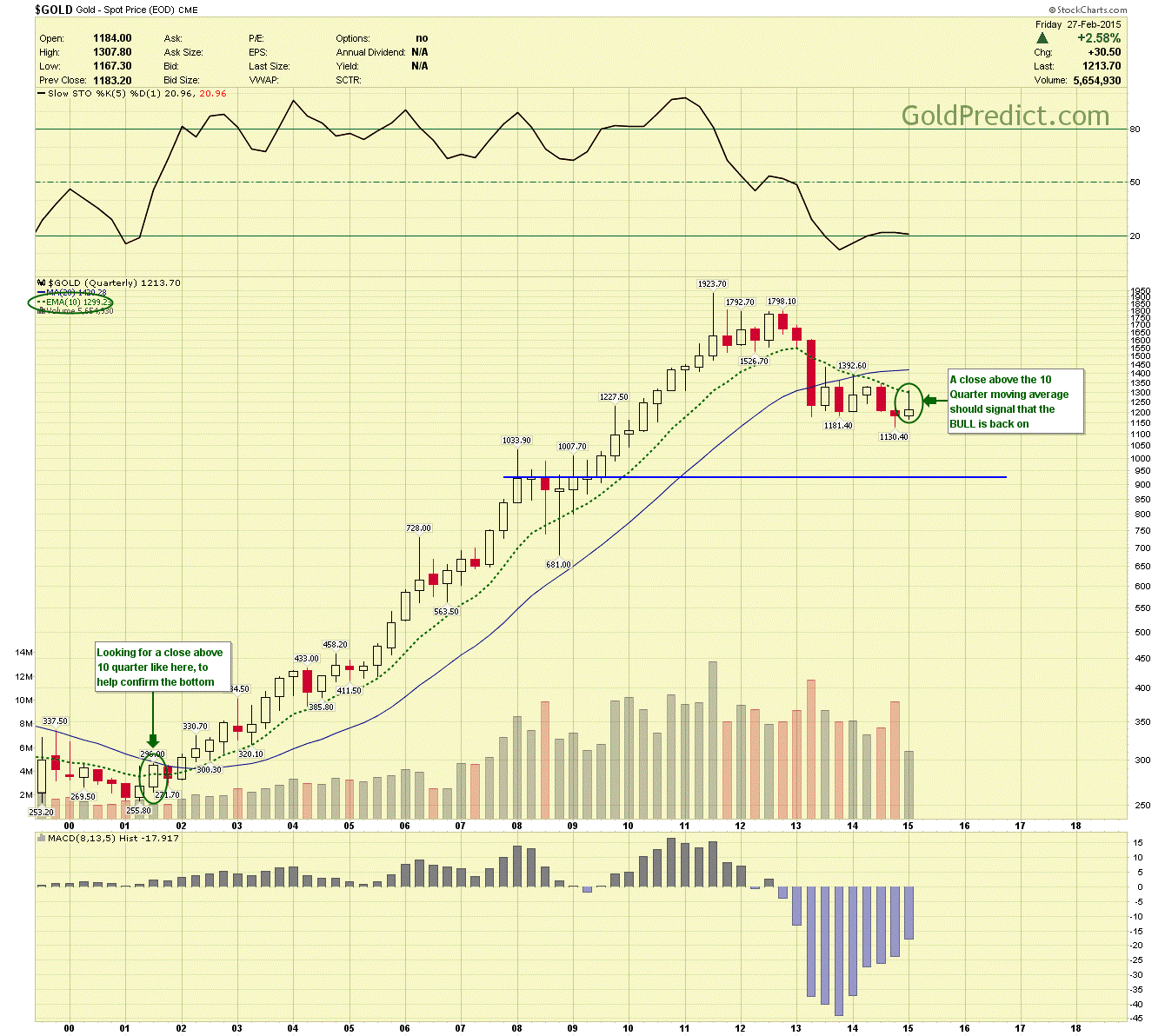 -GOLD DAILY- There is a confirmed low @ $1,190, and we have a close above the 10 (EMA) as of Friday. We should be on day three of a new Common Cycle. As I expect this to be a left translated cycle, the cycle high for this common cycle should arrive within less than 10 trading days. If price cooperates with my analysis, then we should approach the blue box late this week or early the following week. The Example Portfolio will be prepared to take positions as we approach the box. 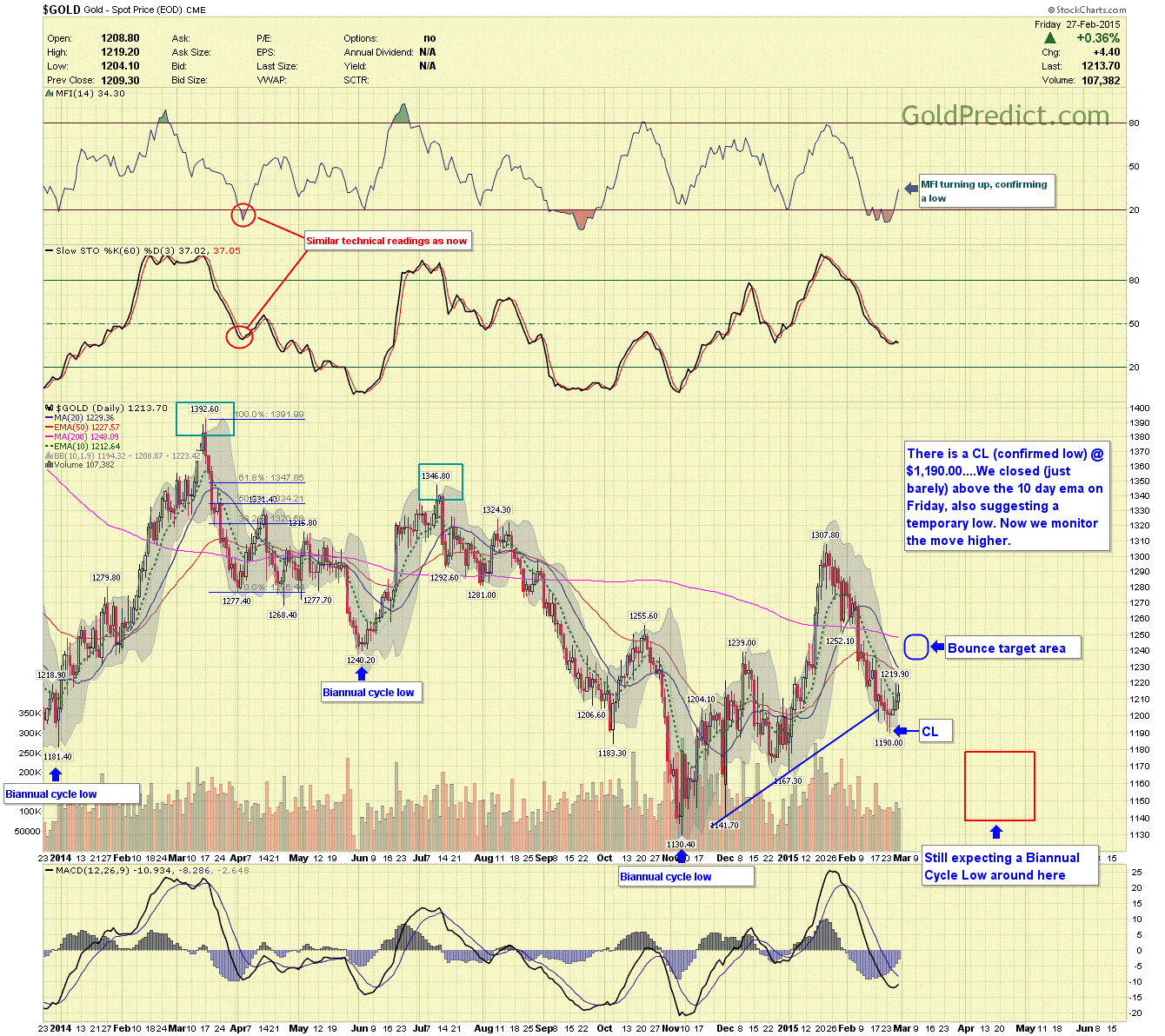 -SILVER DAILY- As with Gold we have a confirmed low in place, as well as a daily close (barely) above the 10 (EMA). Silver should approach the blue target box later this week or early the following week. The Example Portfolio will examine what vehicle (gold, silver or both) has the best risk/reward factors. 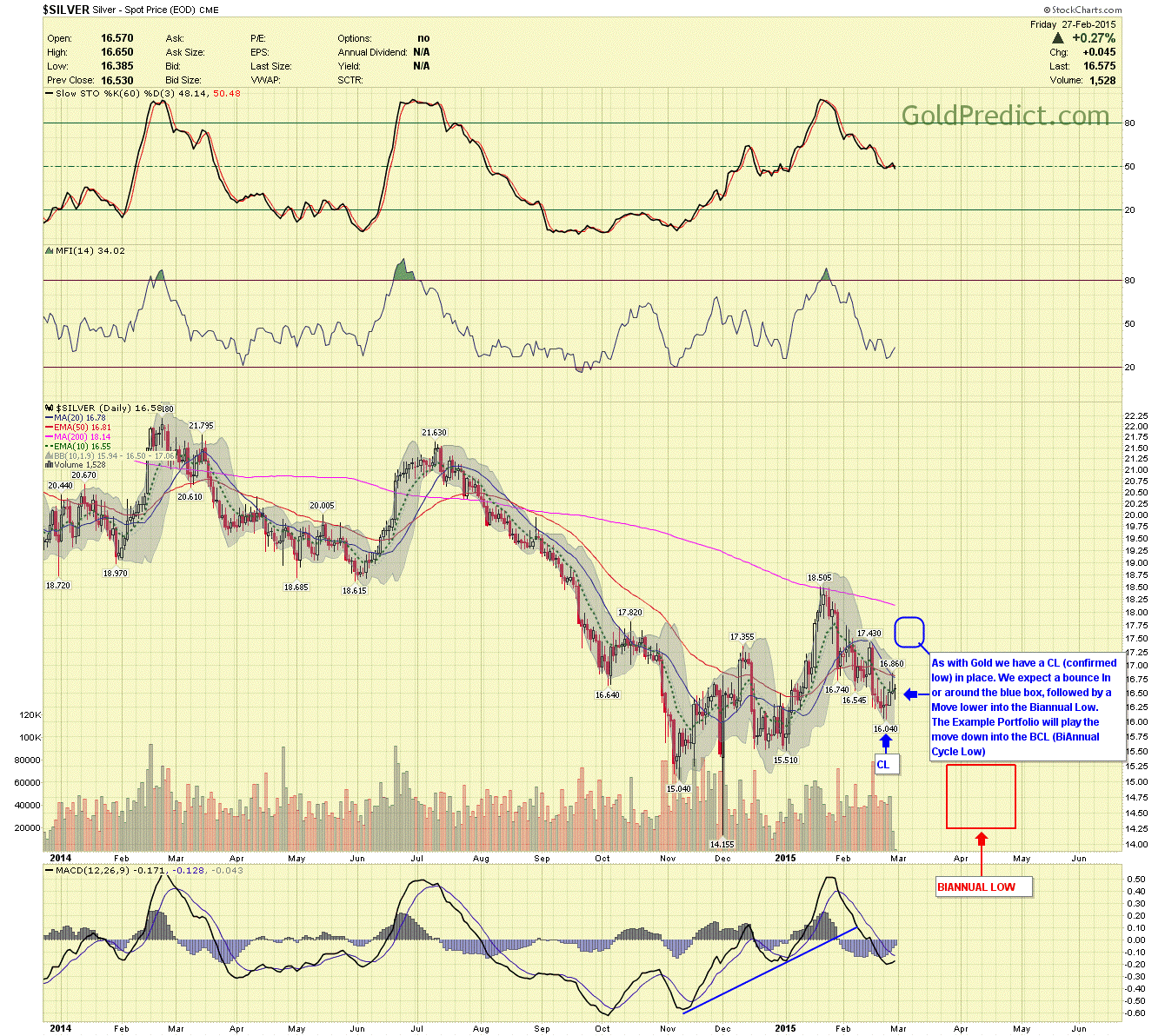 -HUI WEEKLY- Well to my surprise the HUI made a nicely formed Bullish Engulfing pattern this week. Normally, that would get me interested in taking long positions. Two factors cause me to pause and place this into the “will monitor” category. 1) It happened on week 16, and there should (on average) be 20+ weeks between cycle bottoms. 2) There has only been one close below the 10-week moving average. Regardless, it is a flag that we need to watch. If the HUI can form a confirmed low (close above 194.50) next week, then I will look more seriously at an early cycle bottom. 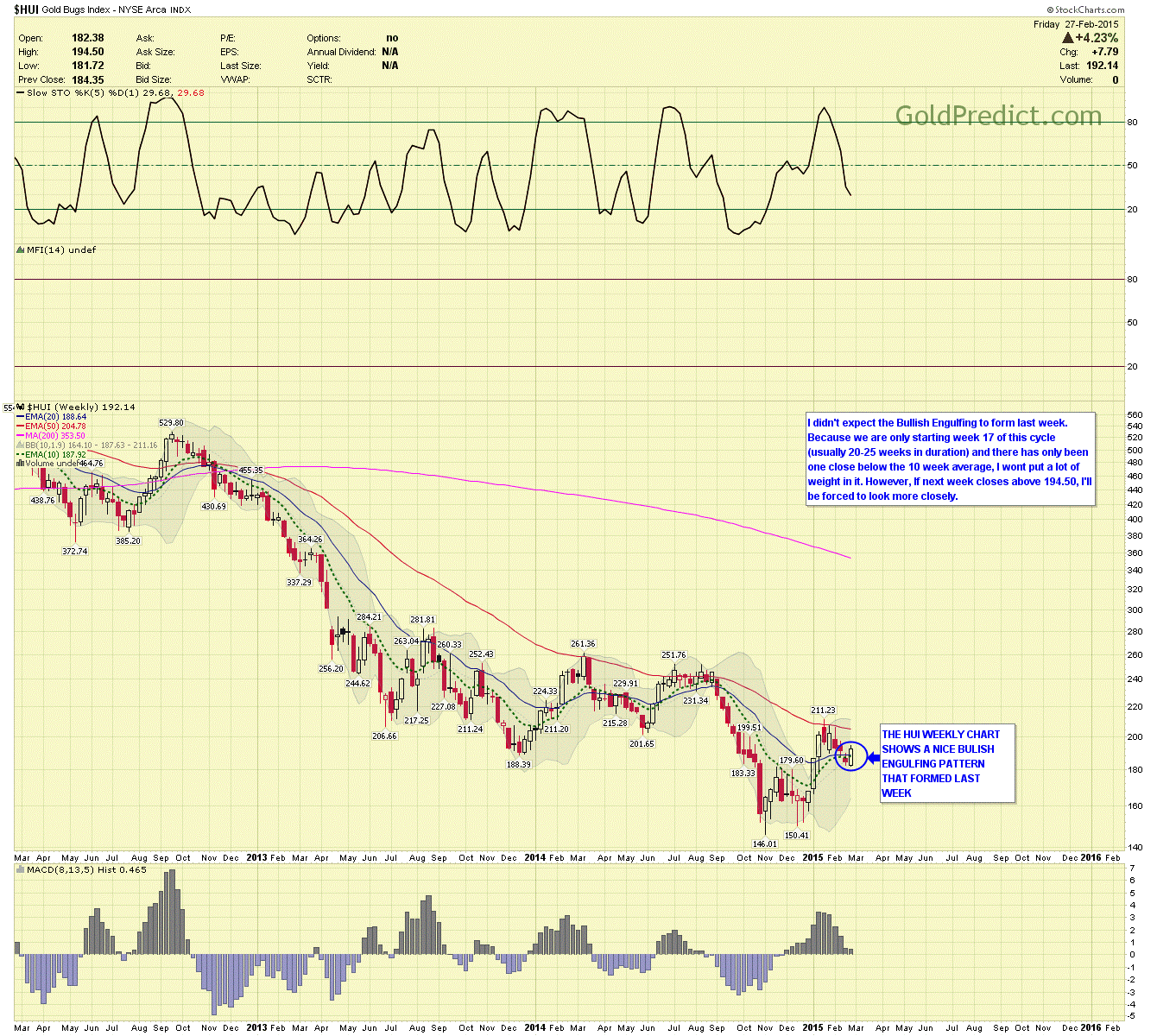 -GDX DAILY- Price has broken out fully of the downward sloping channel as expected. It has done so somewhat begrudgingly showing little signs of strength. If we approach the blue box, the Example Portfolio will look at possible short positions, keeping in mind the Bullish Engulfing of the HUI. 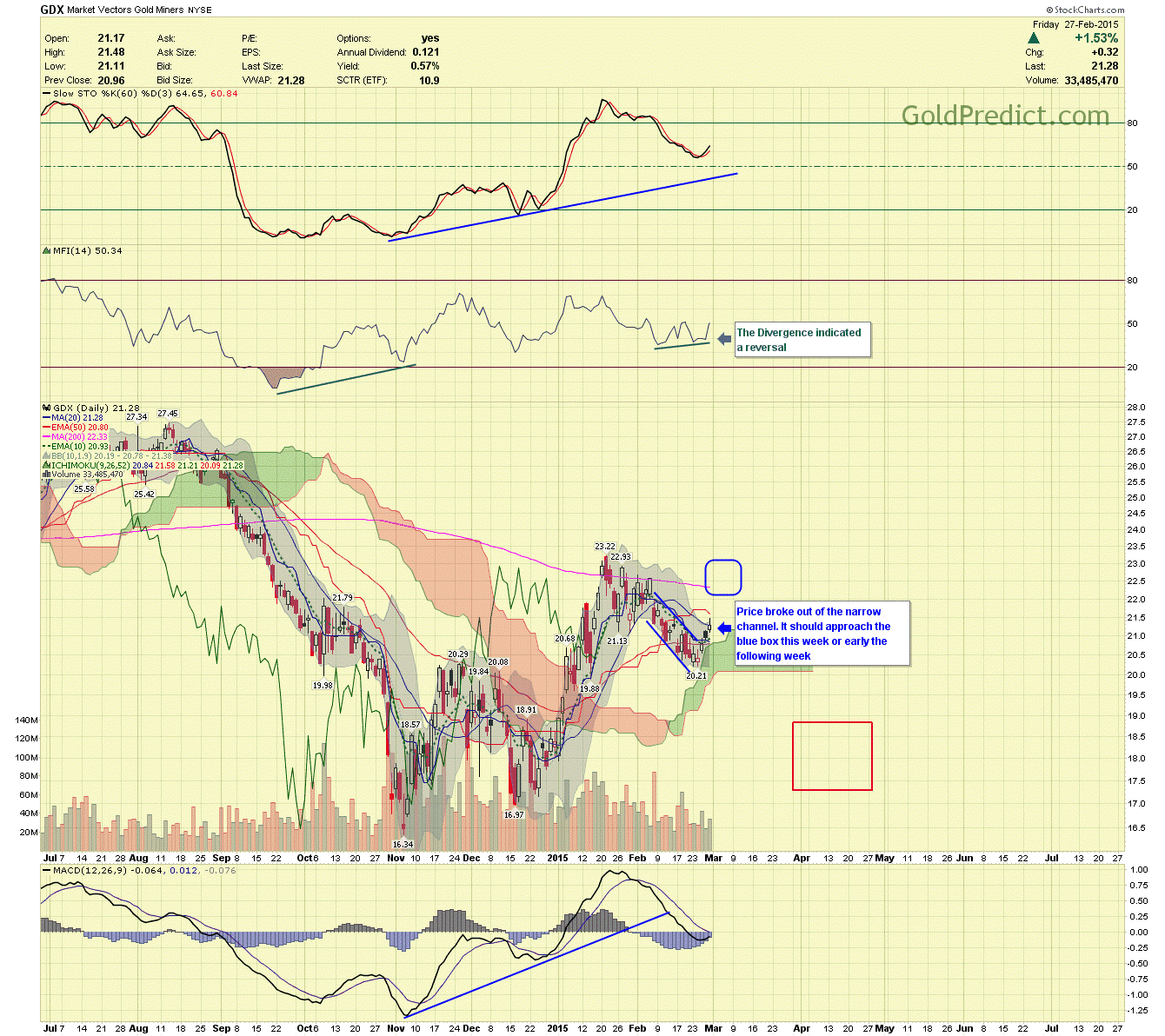 -GDXJ DAILY- Price has slowly traded up out of the downward sloping channel, It appears weaker and may decline at an accelerated rate vs. GDX into a Biannual Cycle low. 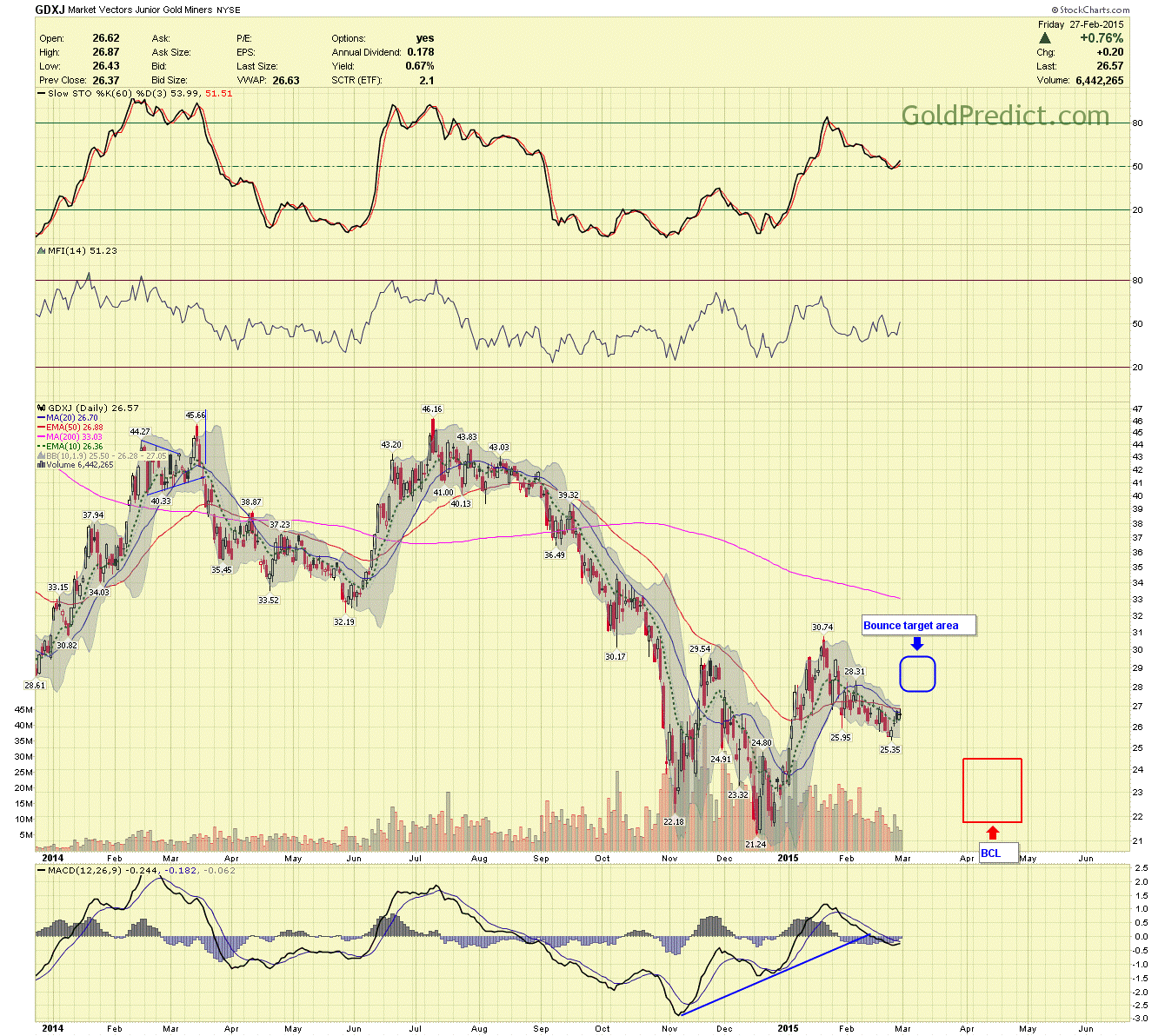 -SPY DAILY- The S&P 500 ETF is showing signs of wanting to test the previous breakout, I’m not convinced it will be able to do so successfully. Price may test the breakout early next week, the Monthly Payroll numbers come out Friday (3/6/15) which could make the end of the week rather interesting. If we close the week above the blue line, then I will consider the test a success. 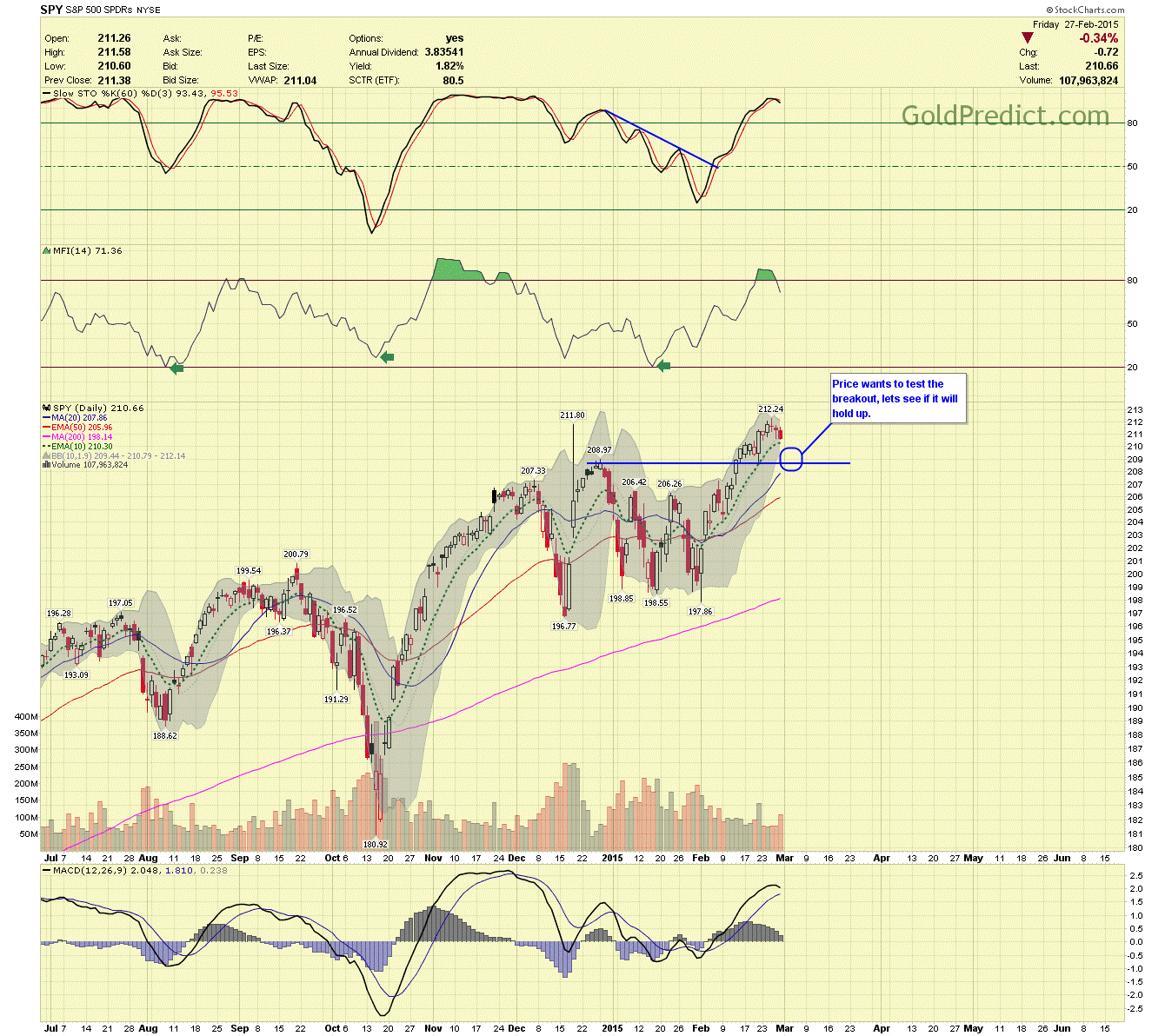 Hope everyone had an excellent weekend, and I look forward to an exciting trading week.

This article was published Posted on February 28, 2016 in Categories Free Updates