To no surprise, everything is lining up to either breakout higher or breakdown this week. I think bullish sentiment is very high, and the corrections into the May low’s seemed inadequate. Whichever way prices break following the Brexit vote will determine if the 6-month cycle bottomed in late May or if this move has been a false breakout.

-US DOLLAR- The dollar made another bullish engulfing pattern and prices are dangerously close to breaking support at 93.38. Another make or break situation is developing. 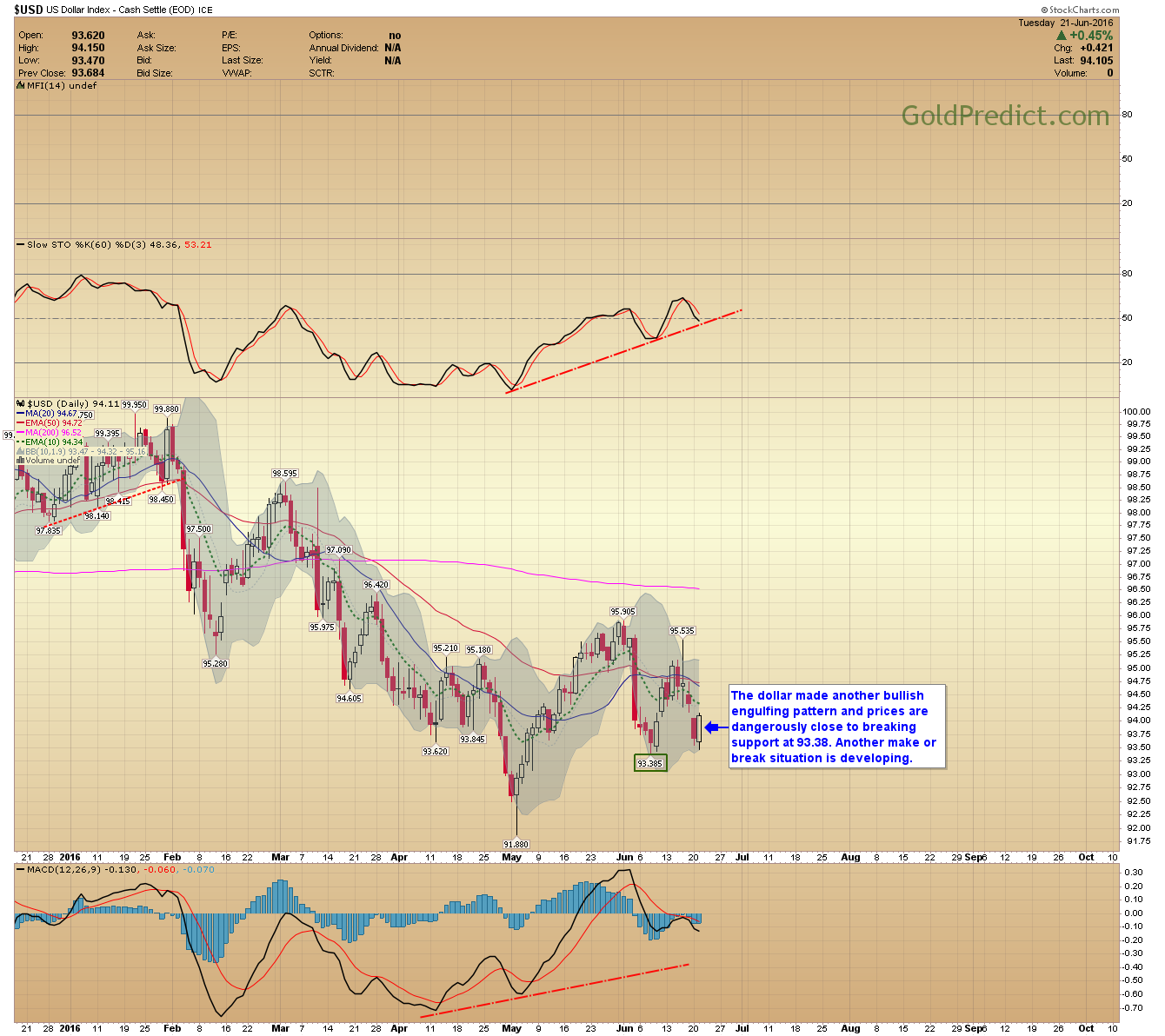 -SILVER- Prices have been trading sideways ahead of Thursday Brexit resolution. Like gold, prices will break higher or lower either confirming or denying the formation of a 6-month low. 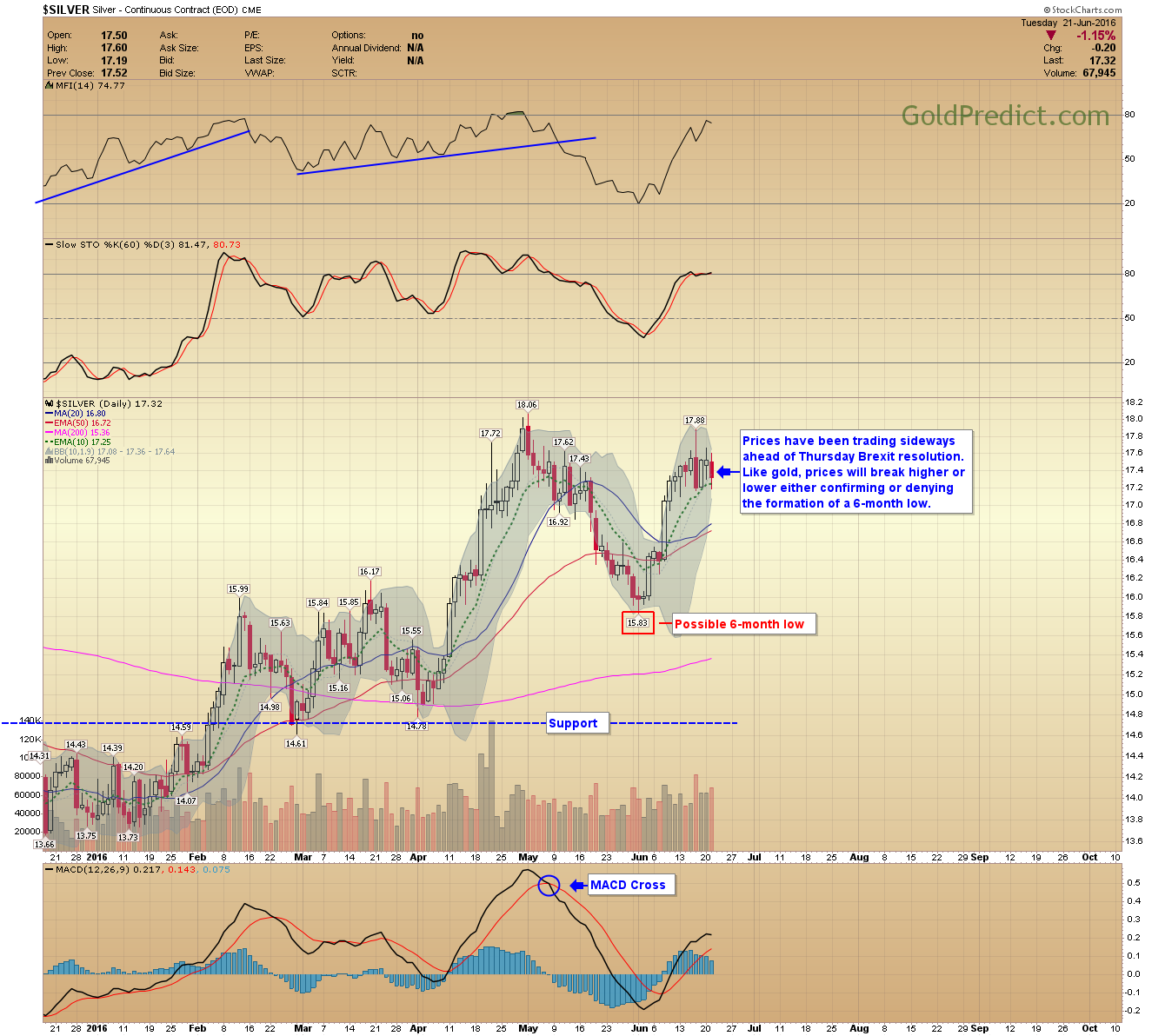 -GDX- Prices are slowly rolling over, and I think the false breakout theory may be playing out. Note: MFI (top) dropped back below the breakout trendline. 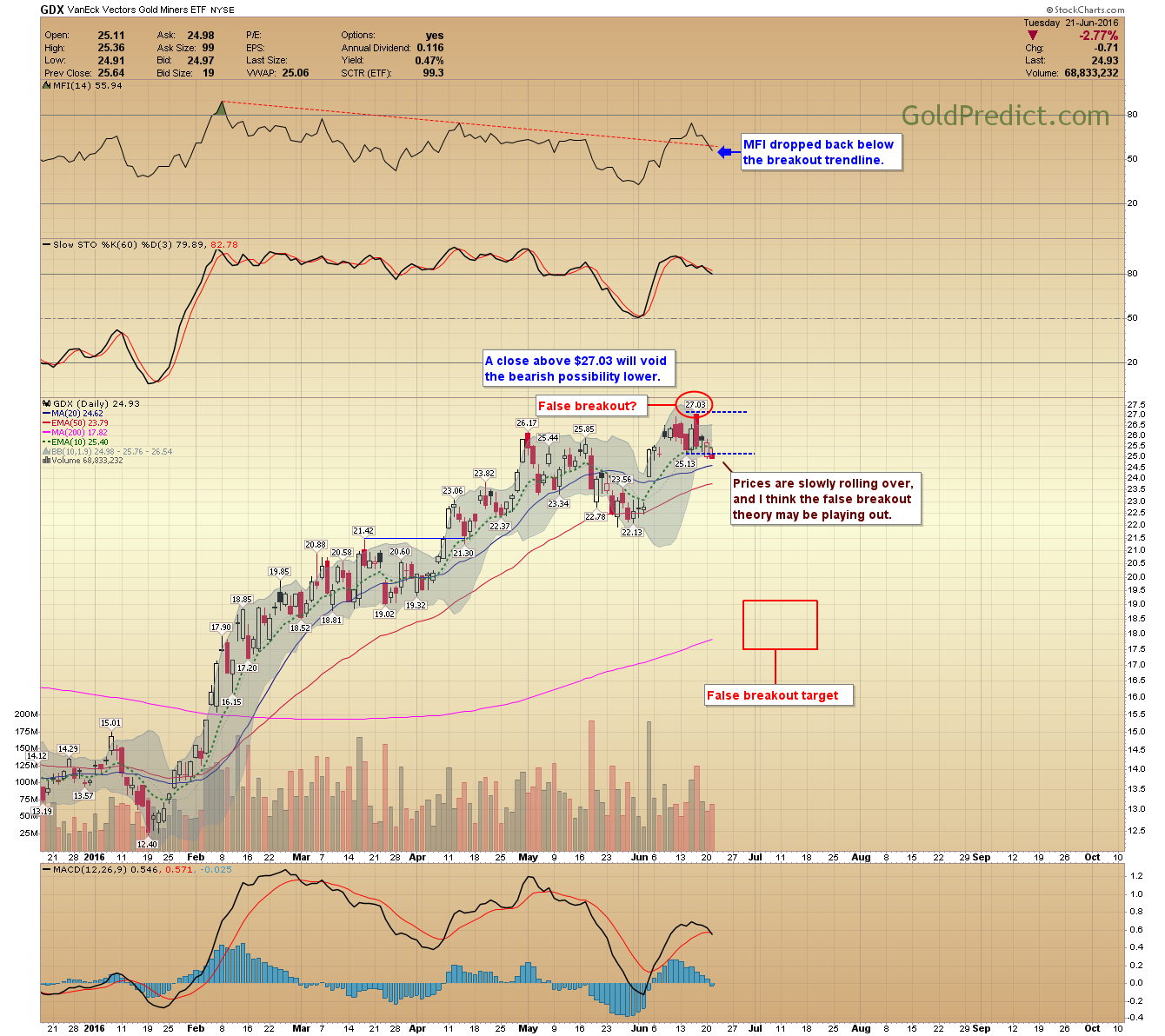 -GDXJ- Junior miners are holding up better than the seniors, but they too may be rolling over.

-SPY- Stocks are also poised to either breakout to new highs or lower to establish a new downtrend. 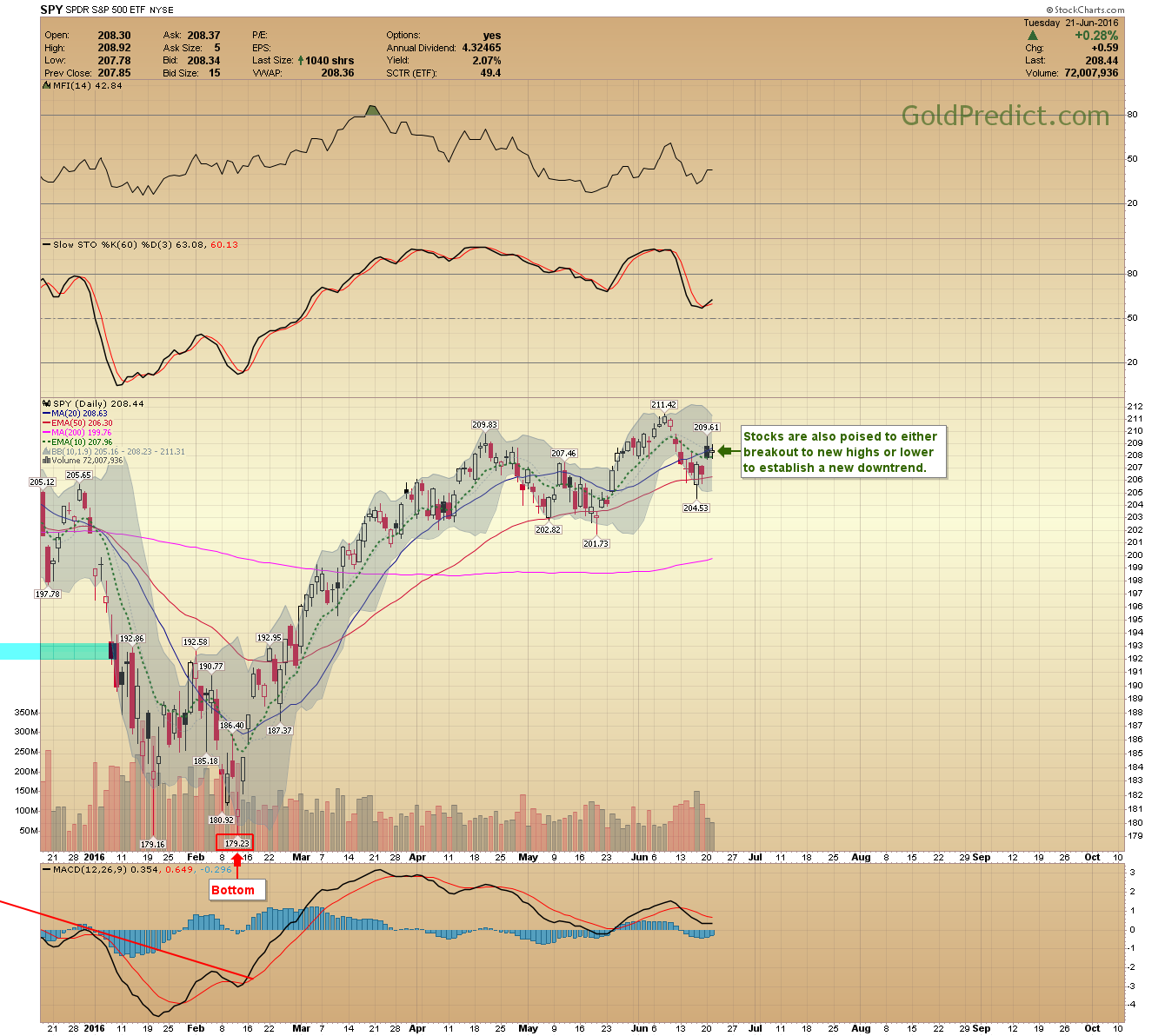 -WTIC- Oil prices are about as high as I would like to see them if this is just a bounce before dropping to the July target. A solid close above $50.00 will likely take prices to the $56.00 level previously mentioned. 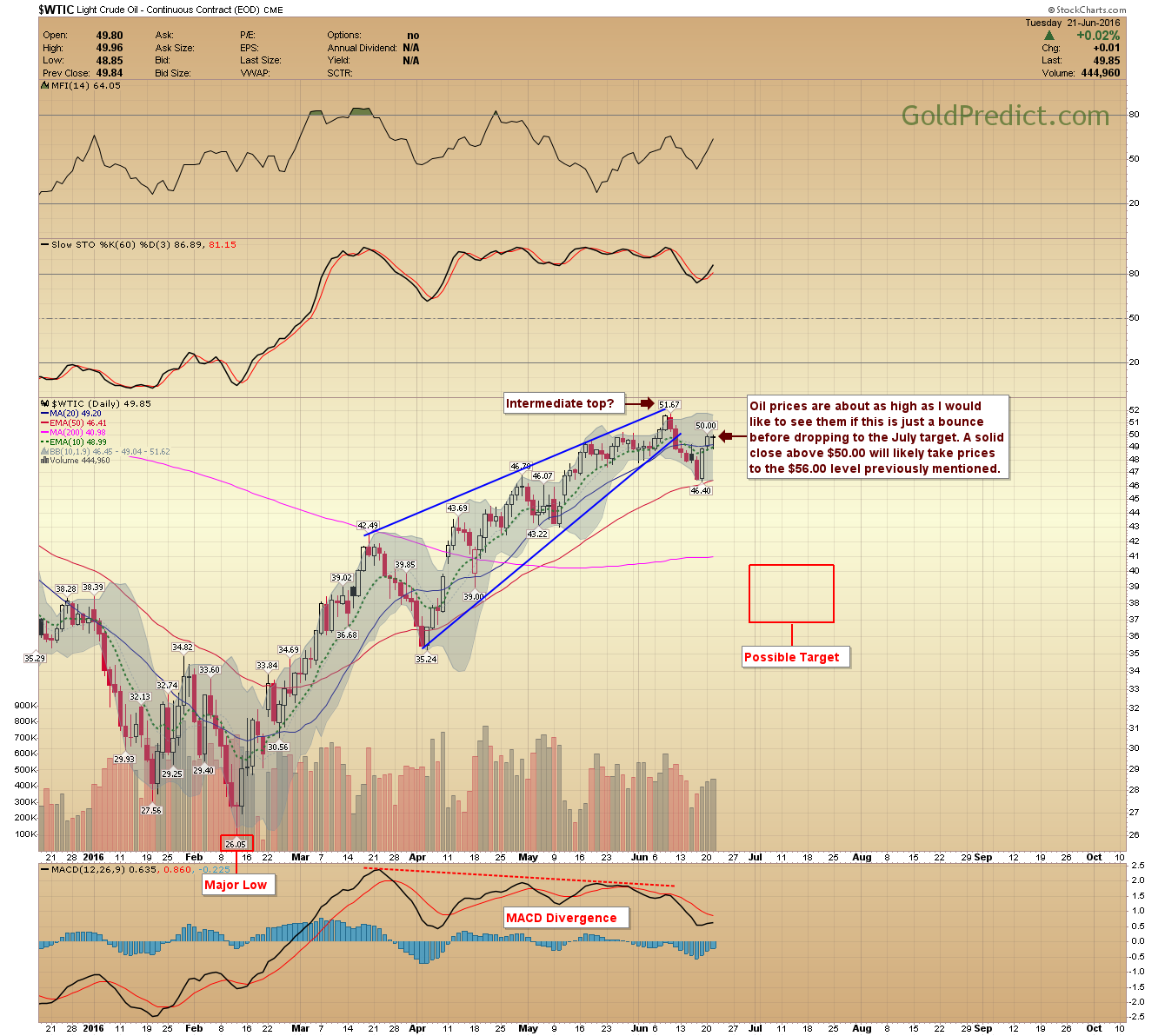 Finally, non-commercial speculative long contracts are at 20-year highs whereas smart money (commercials) have remained at record shorting levels. The big-boys are shorting gold, and they’re usually right. If U.K. voters choose to continue in the EU precious metals and miners could sell off sharply. The odds currently suggest Britain will remain.

This article was published Posted on June 21, 2016 in Categories Free Updates, Reports