My timing window for a cycle low was wildly unsuccessful; we are now faced with two scenarios.

How do we play this? Scenario one proposes a continued rise into late February before correcting into the next cycle low. However, with the short-term indicators overbought and negative divergences forming, I can’t in good conscience issue a buy signal. Therefore, it is seemingly prudent to exercise patience and wait for a genuine correction.

Scenario two would have prices topping last week, or they could spike a little higher next week. Once the top is in, there should be a 1-2 week correction.

-US DOLLAR WEEKLY- Prices closed lower for the sixth consecutive week, and the stochastics indicator (above) is oversold. Six continuous weeks is the longest prices have declined without an intervening bounce since 2010. Probabilities favor a relief rally. 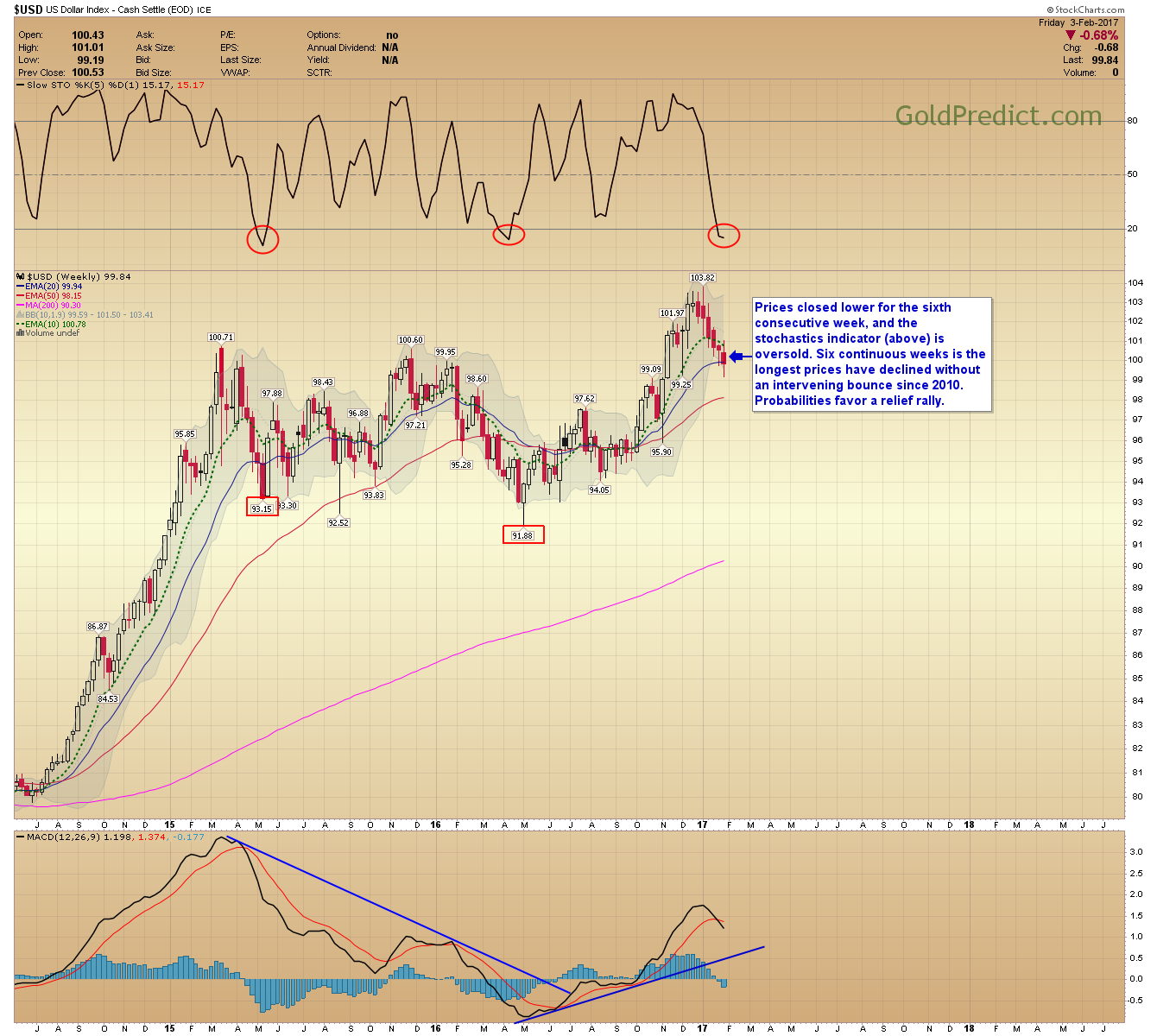 -US DOLLAR DAILY- Prices failed to hold above the 10-day EMA on Friday, and we are still waiting for a bottom. The RSI (top) has diverged for three weeks further supporting an impending trend change. 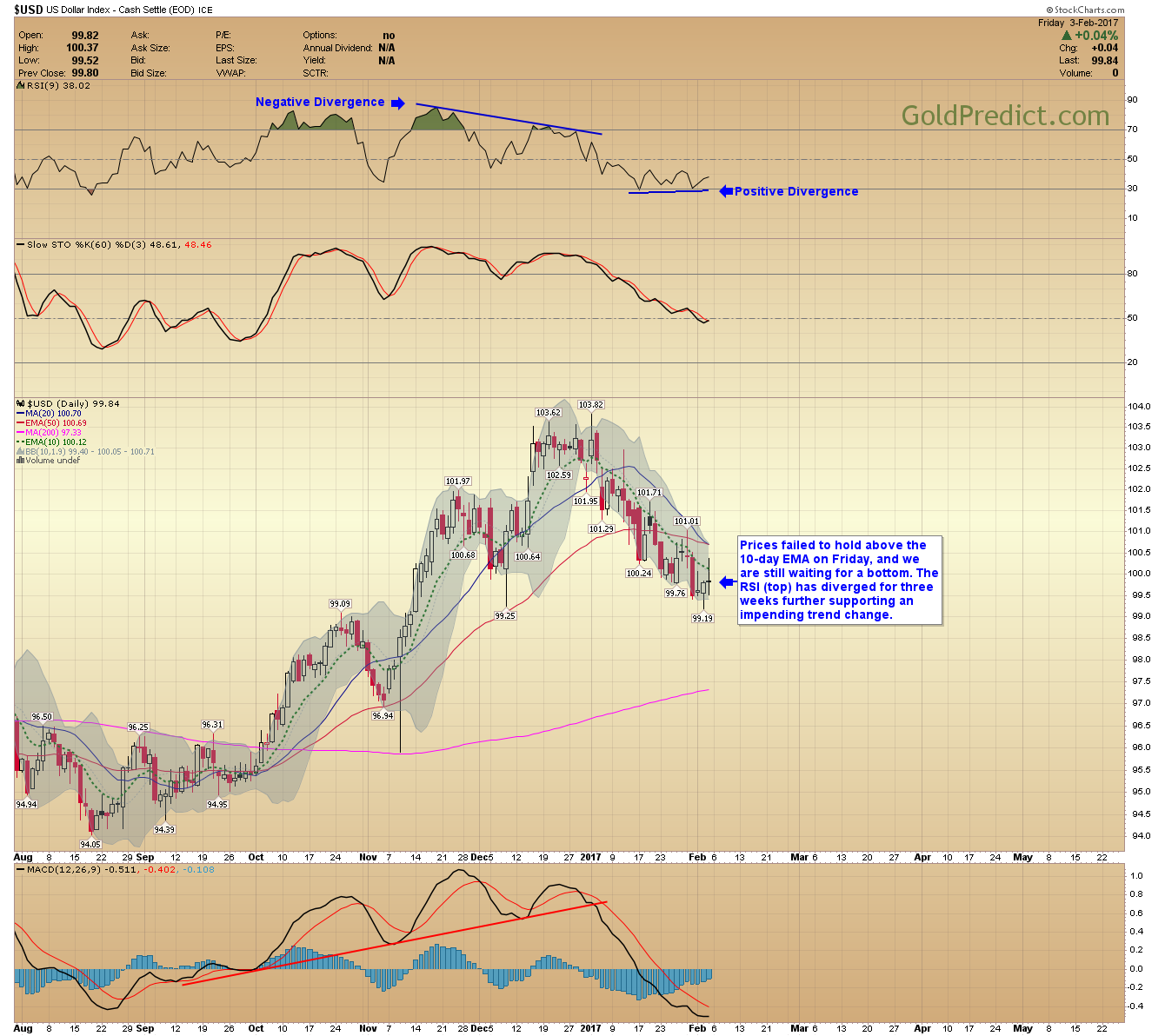 -GOLD WEEKLY- Prices have rallied at a sharp angle since the December low and are approaching resistance at the 50/200 week moving averages ($1,230-$1,245). To continue this angle of ascent without a reasonable pullback would be unusual. 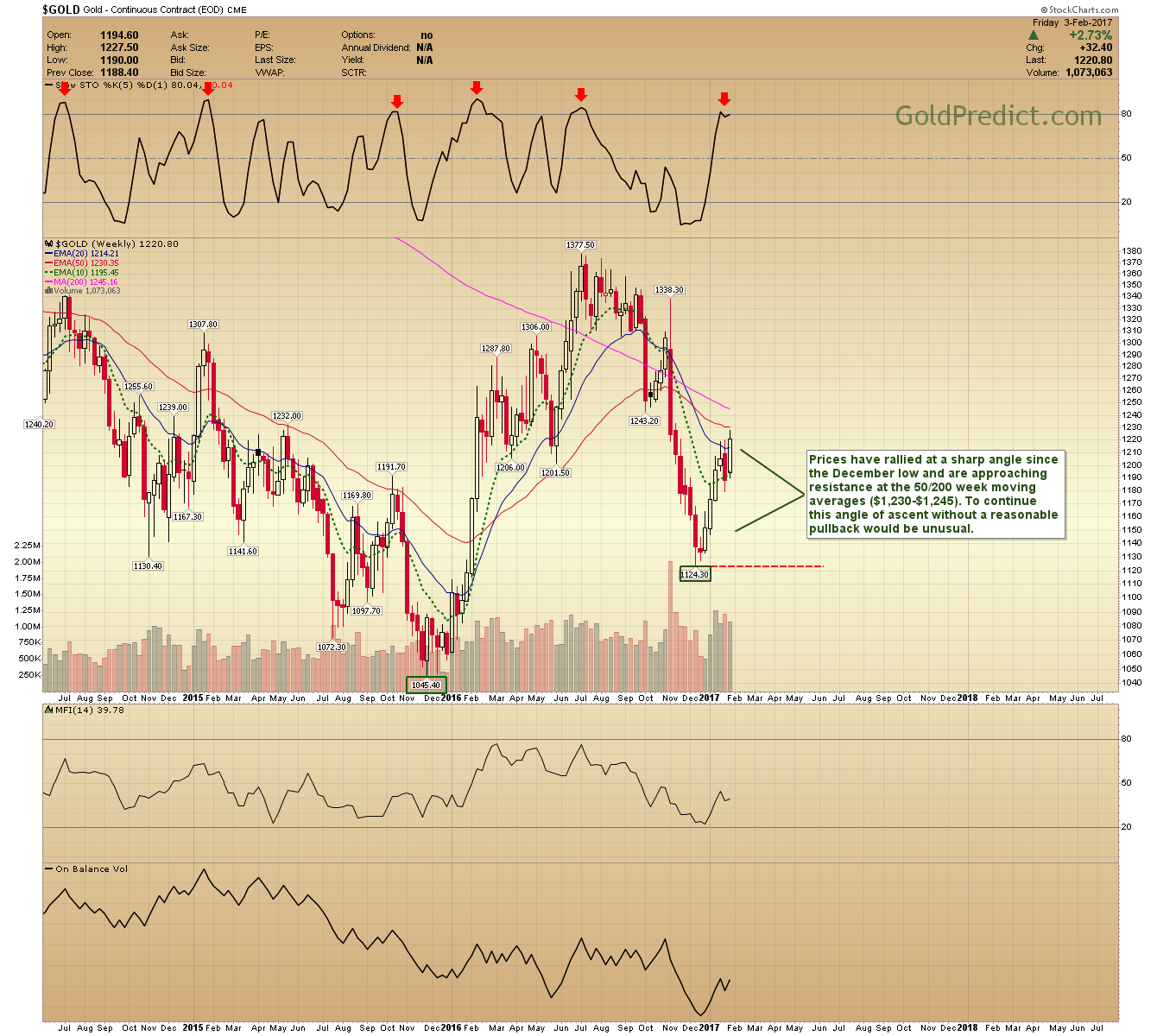 -GOLD DAILY- Price volume, MACD (below) and RSI (top) are all diverging supporting the return of a more meaningful correction. 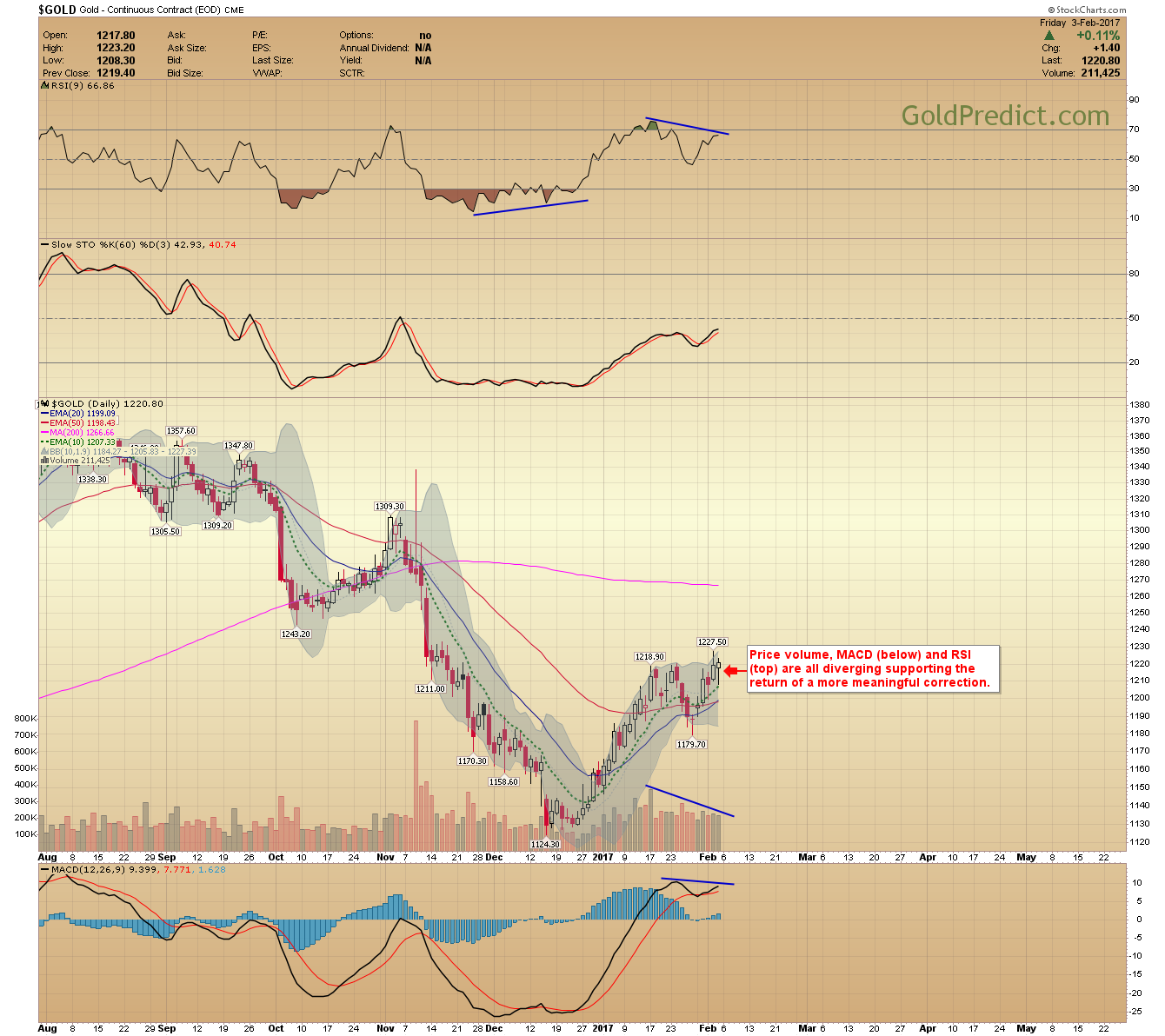 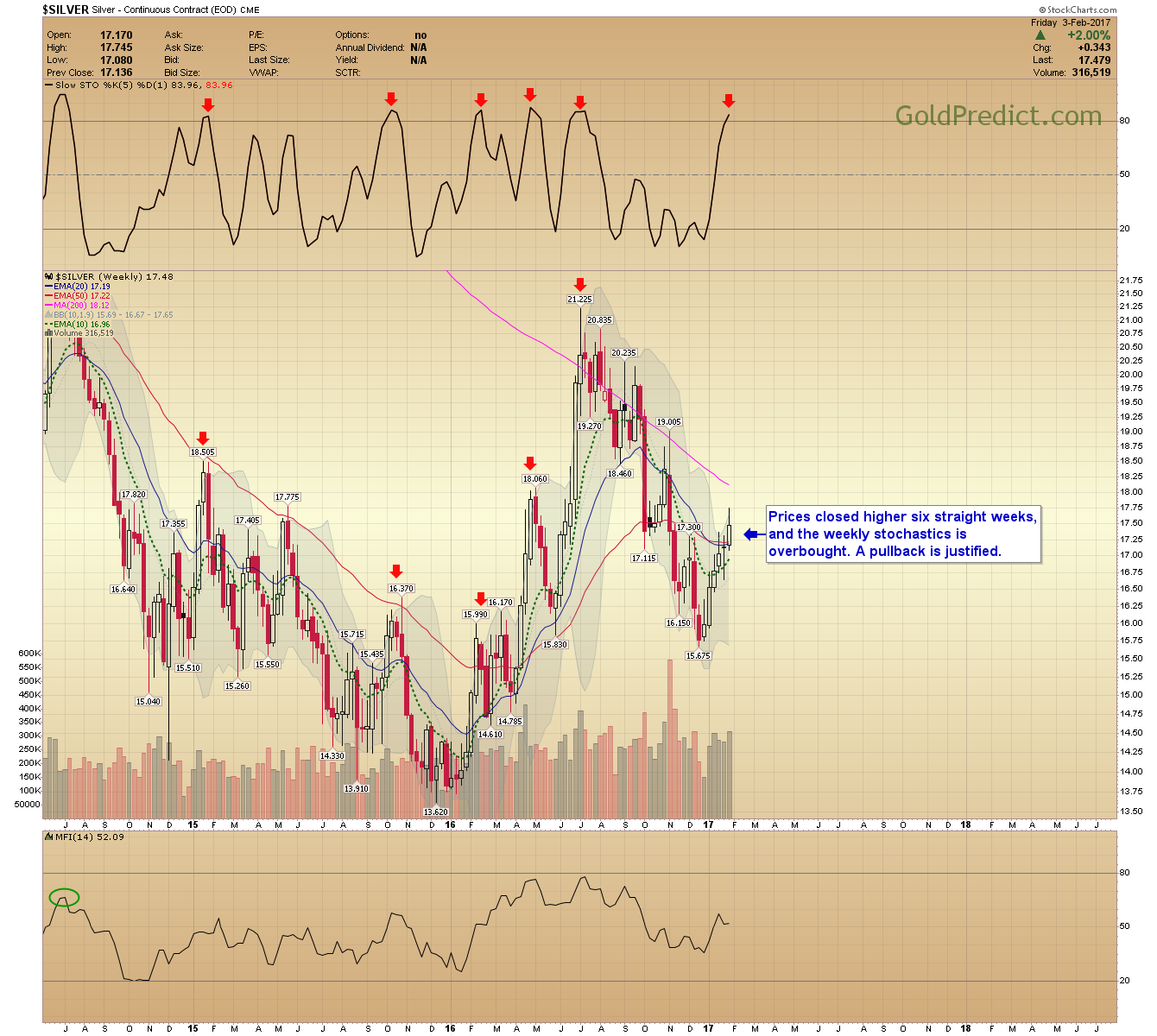 -SILVER DAILY- We have a 5-wave structure with a negative RSI (top) divergence. Prices should soon pullback in a corrective manner. 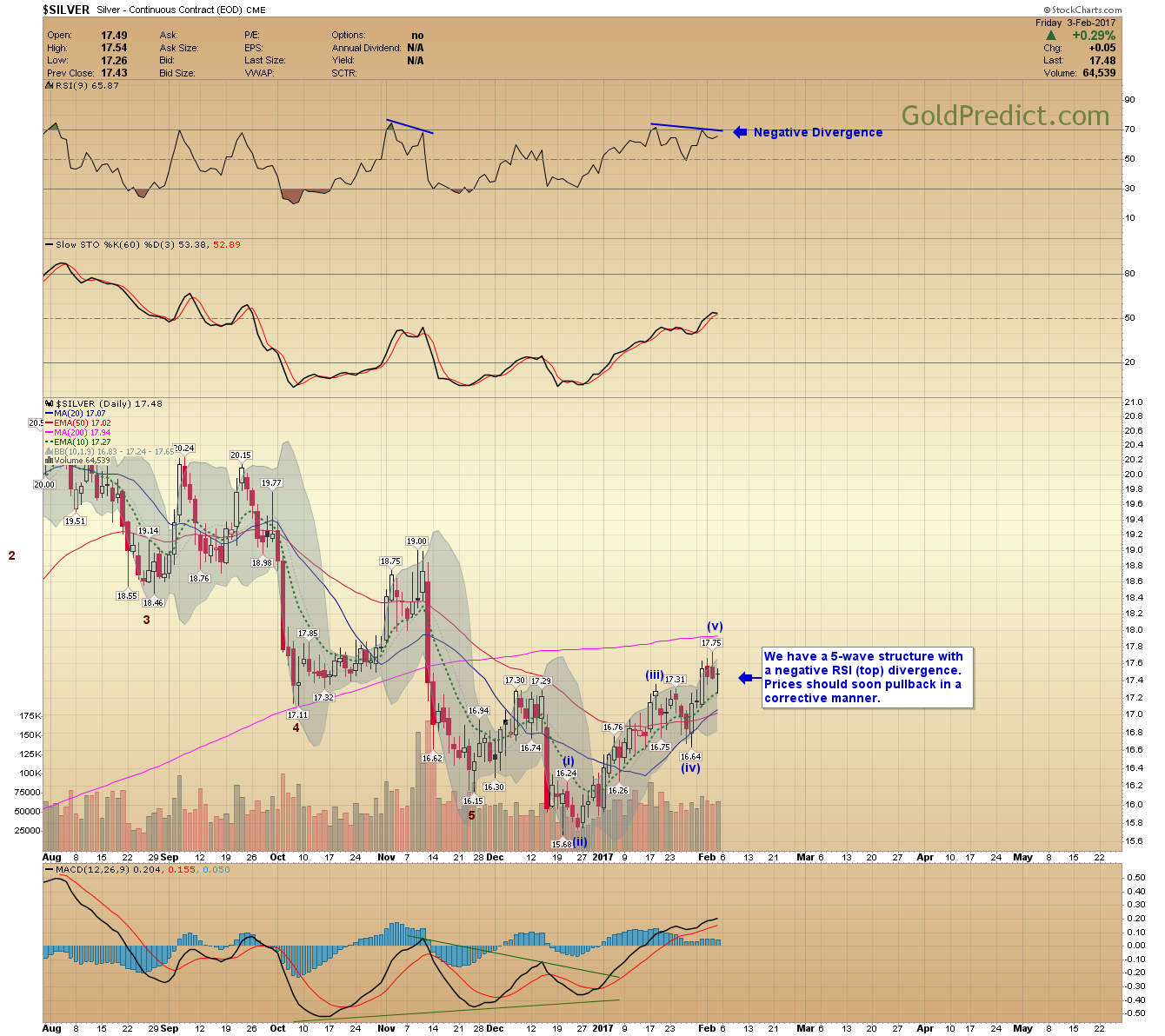 -GDX- Volume is lacking, and the RSI is diverging negatively. I can’t issue a buy signal until there is a recognizable correction. 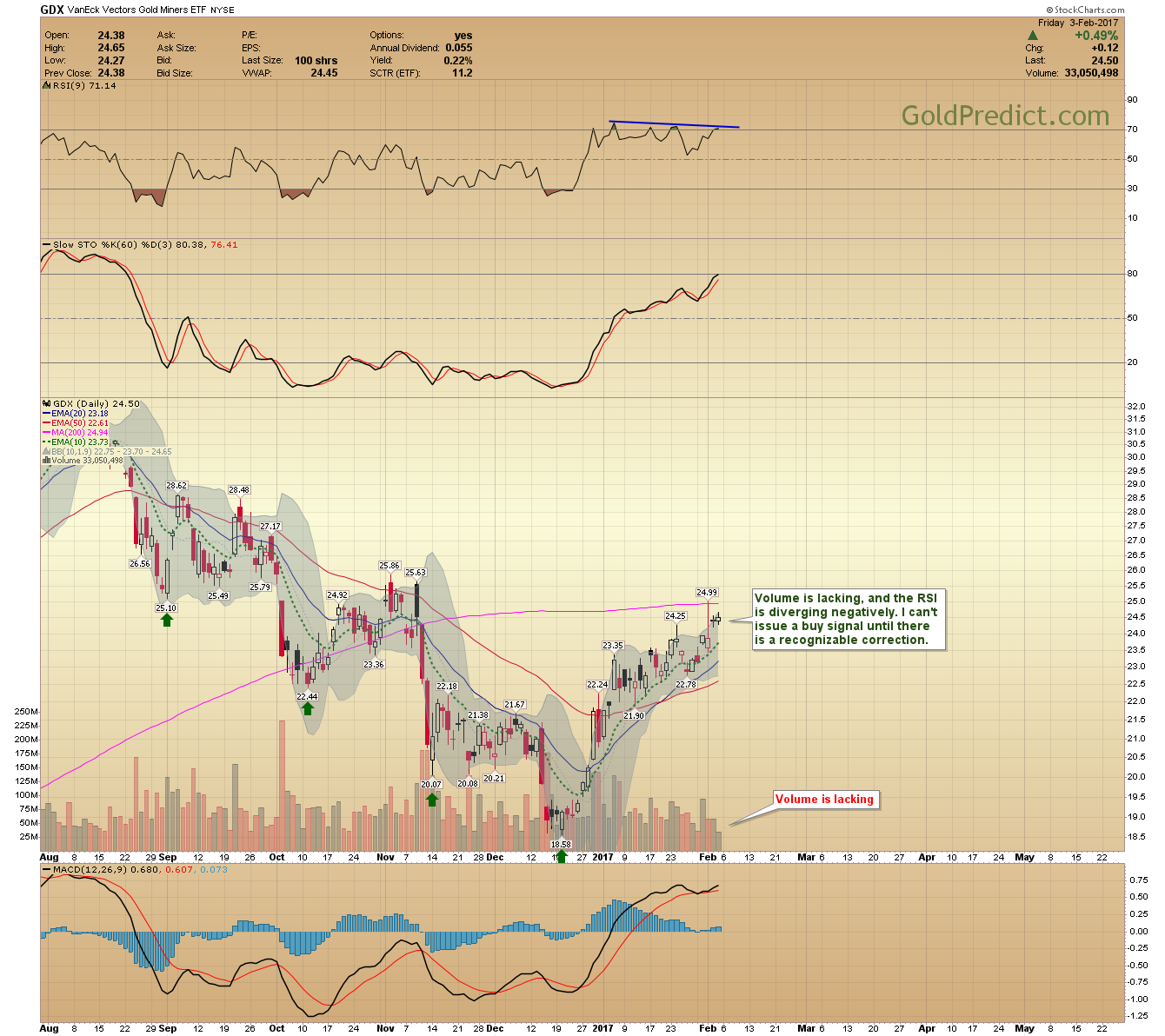 -GDXJ- Prices are increasing, but the underlying technicals aren’t supportive. Volume has declined steadily during this rally. 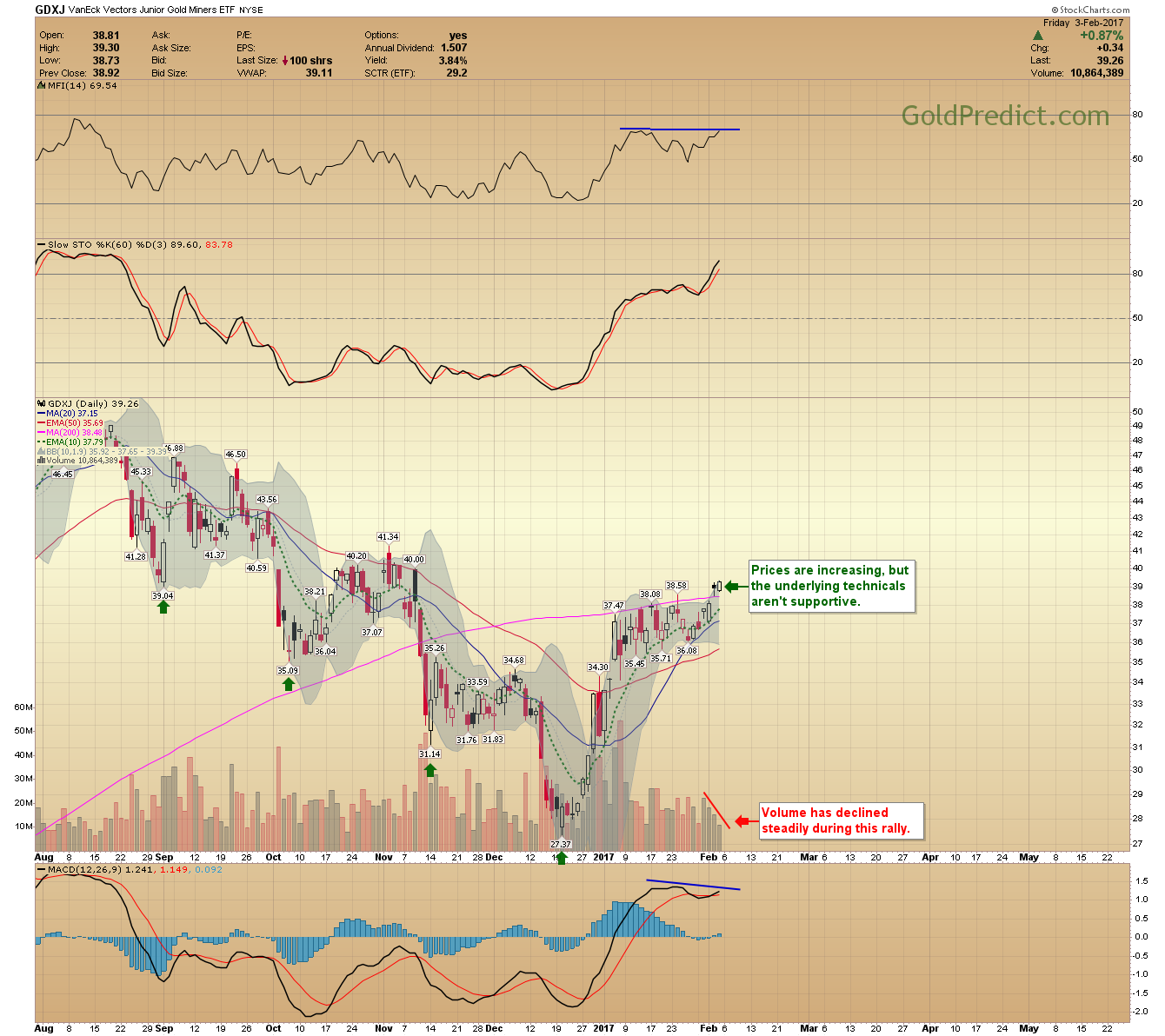 -SPY- Prices surged after the healthy employment report, and the market is ready for new highs. Breaking the trendline will signal a multi-week correction phase. 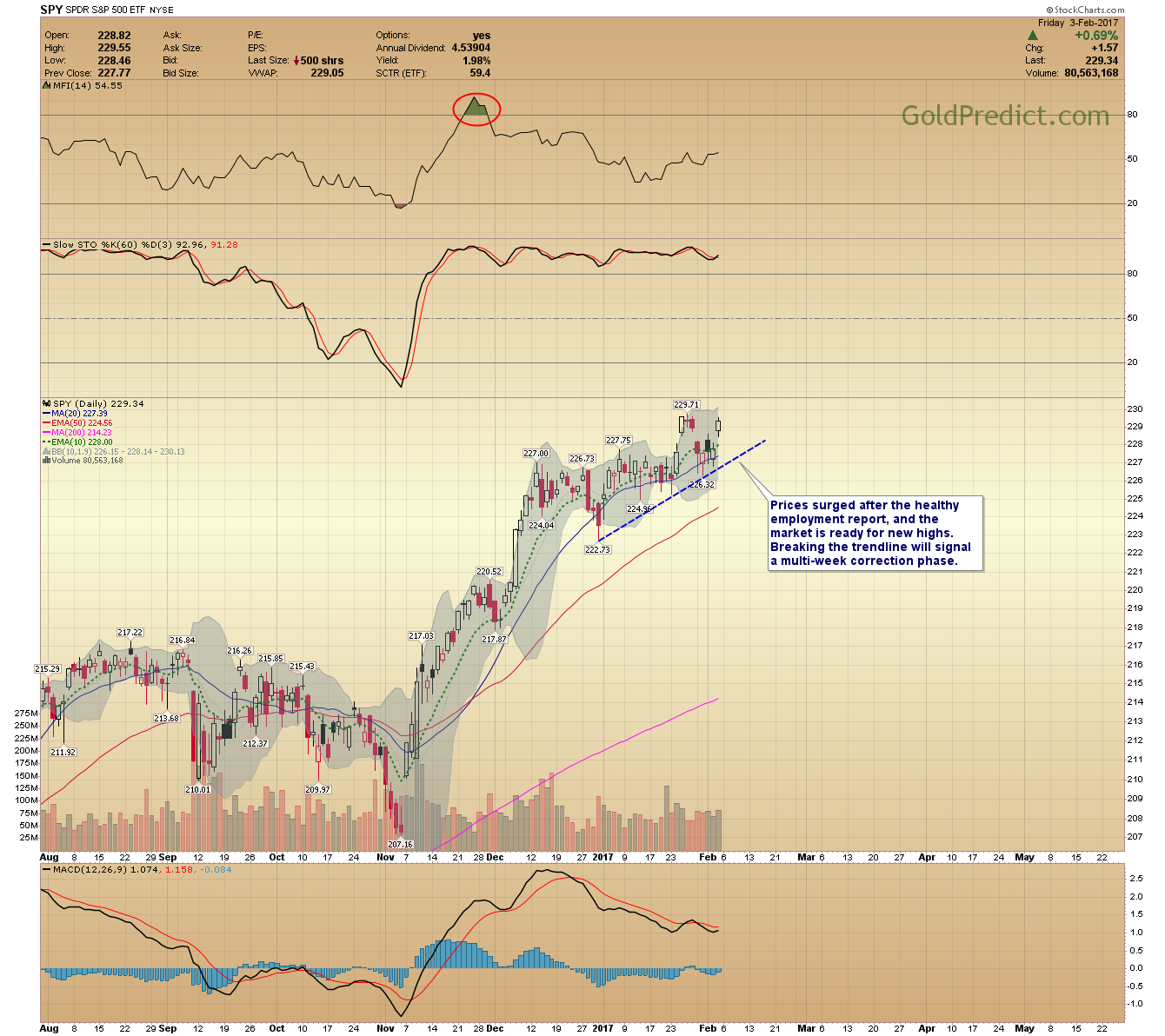 -WTIC- WTI is still following the 2015 topping structure, and as long as we remain below the $55.24 high I’ll anticipate a tradable downswing. Closing below the 10-week EMA ($52.30) will start the multi-week correction. 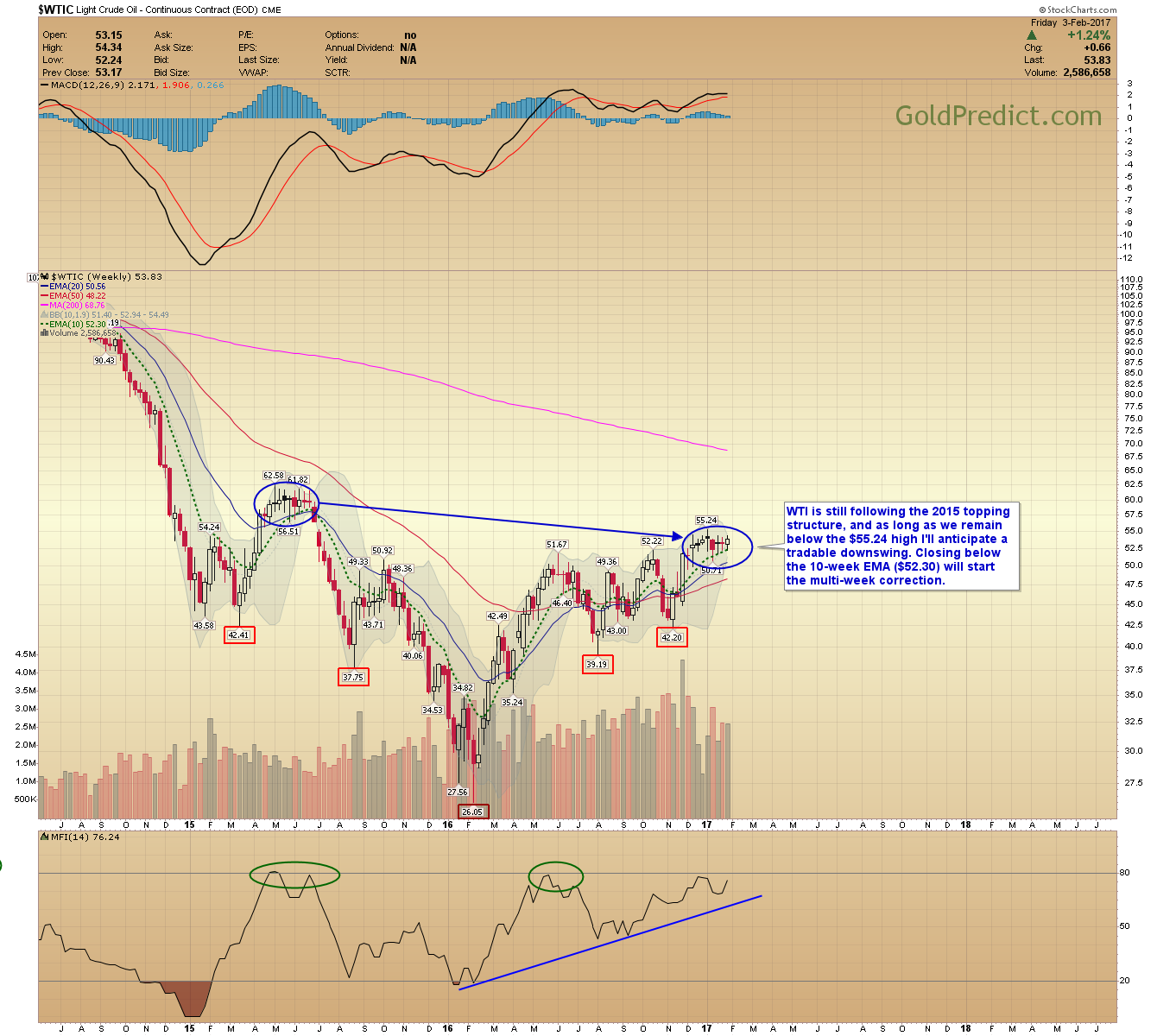 -WTIC- Oil could shoot up to $60.00 if Trump sanctions Iran. That would void the similarity to the 2015 top. Closing below the 50-day EMA should initiate the decline. 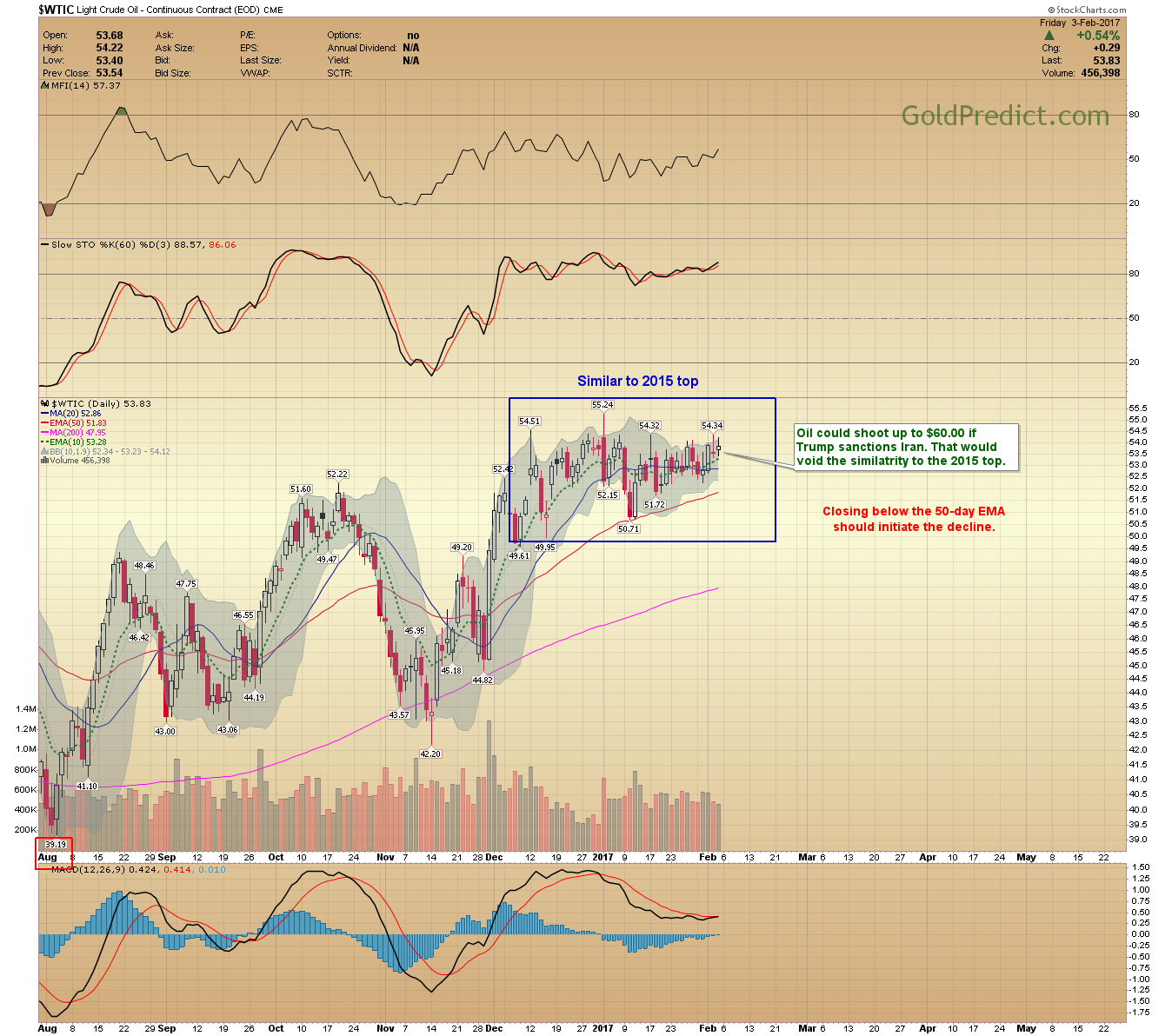 If scenario two is playing out, I’d expect to see signs of weakness in metals sometime next week. I’ll update as the data presents itself. Oil may be getting closer to a shorting opportunity, and I will post if I see a setup.

This article was published Posted on February 4, 2017 in Categories Free Updates, Weekend Newsletters