The MFI indicators for both gold and silver have diverged negatively since the beginning of August. This doesn’t guarantee an interim top, but it signifies a fading cycle.

It’s not uncommon for the first daily cycle to stretch coming out of a 6-month low. If prices decline after tomorrow’s employment report, I’ll expect the daily cycle low to arrive during the week of September 11th.

Oil barely corrected during August. Its resilience made me take a hard look at energy stocks. The 8-month slump may be over.

-US DOLLAR- The dollar formed a swing low but ran into resistance at the 20-day EMA. Subsequently, a bottom is unconfirmed. A low will be established if prices turn higher and close above the 20-day (93.13). An intermediate-term rally should challenge the blue trendline or possibly the 200-day MA. 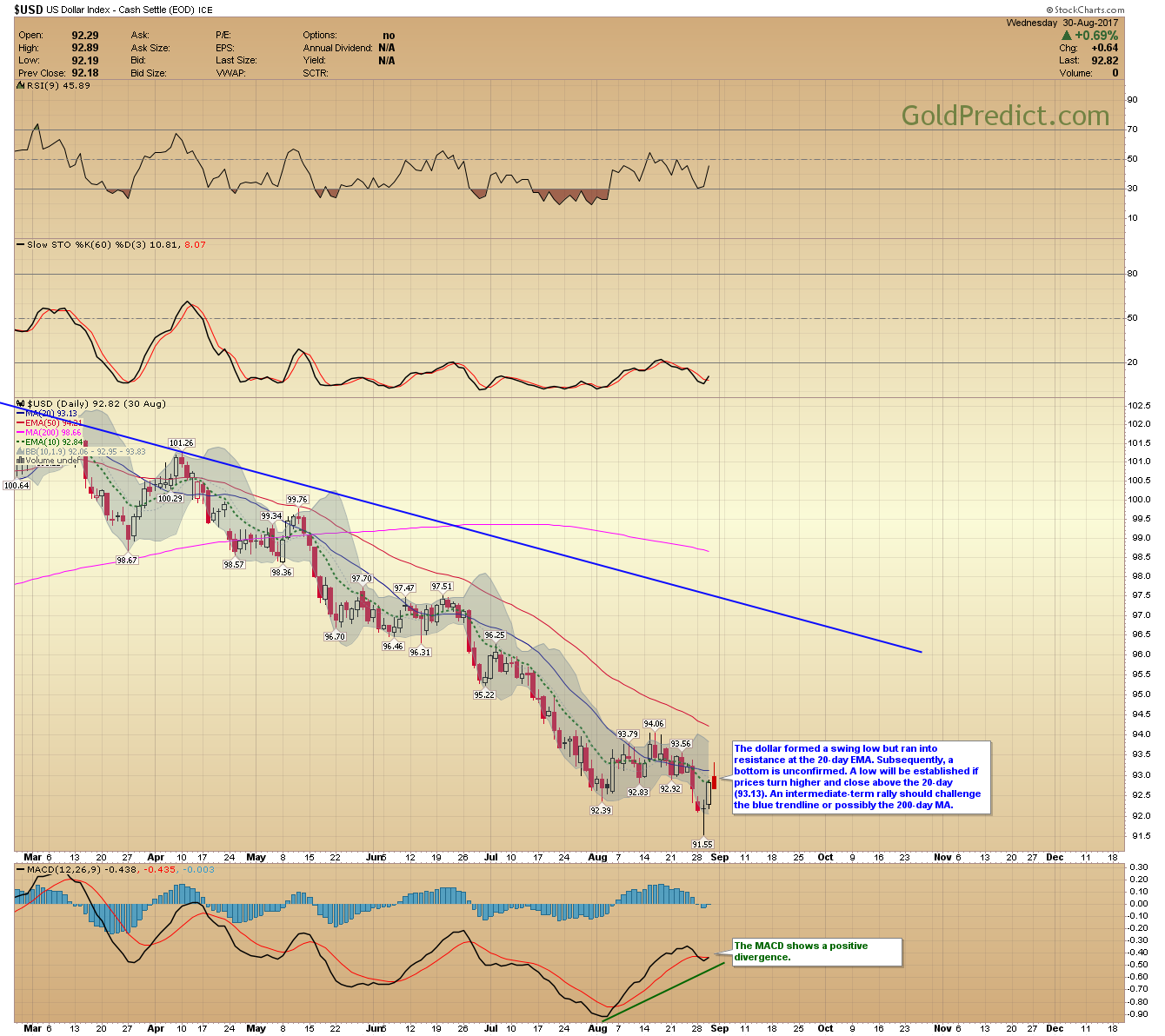 -GOLD- Prices are testing Tuesday’s spike high. Closing above $1,331.90 could lead to more gains. Traditional measures support a decline into a daily cycle low. The elongated sequence favors the week of September 11th for that low. Note: MFI is diverging negatively with this high, supporting the potential for a decline. 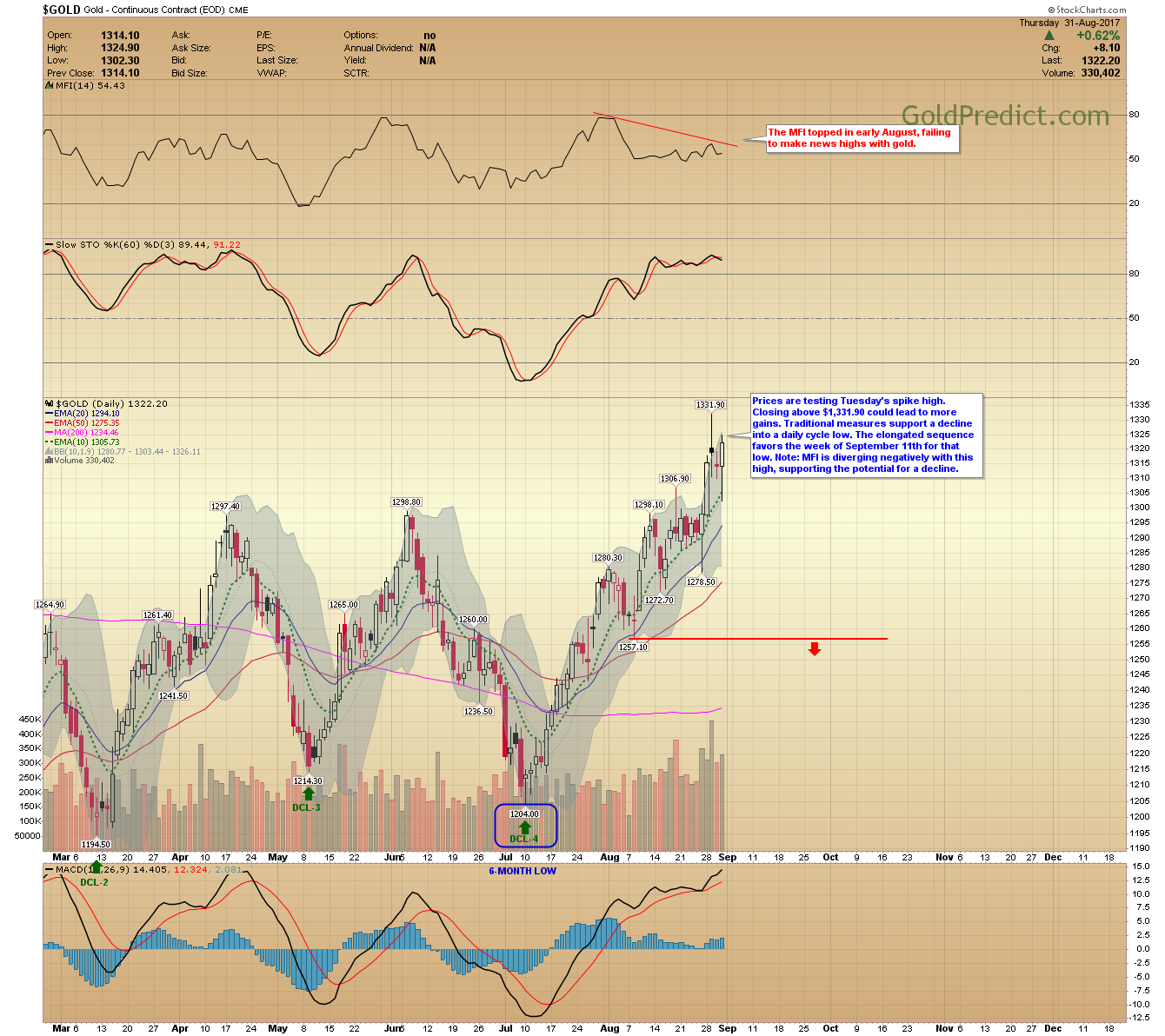 -SILVER- Silver is re-examining Tuesday’s high. Its MFI is diverging negatively describing a slowing move and likely cycle exhaustion. Prices need to close below $17.25 to form a swing high. 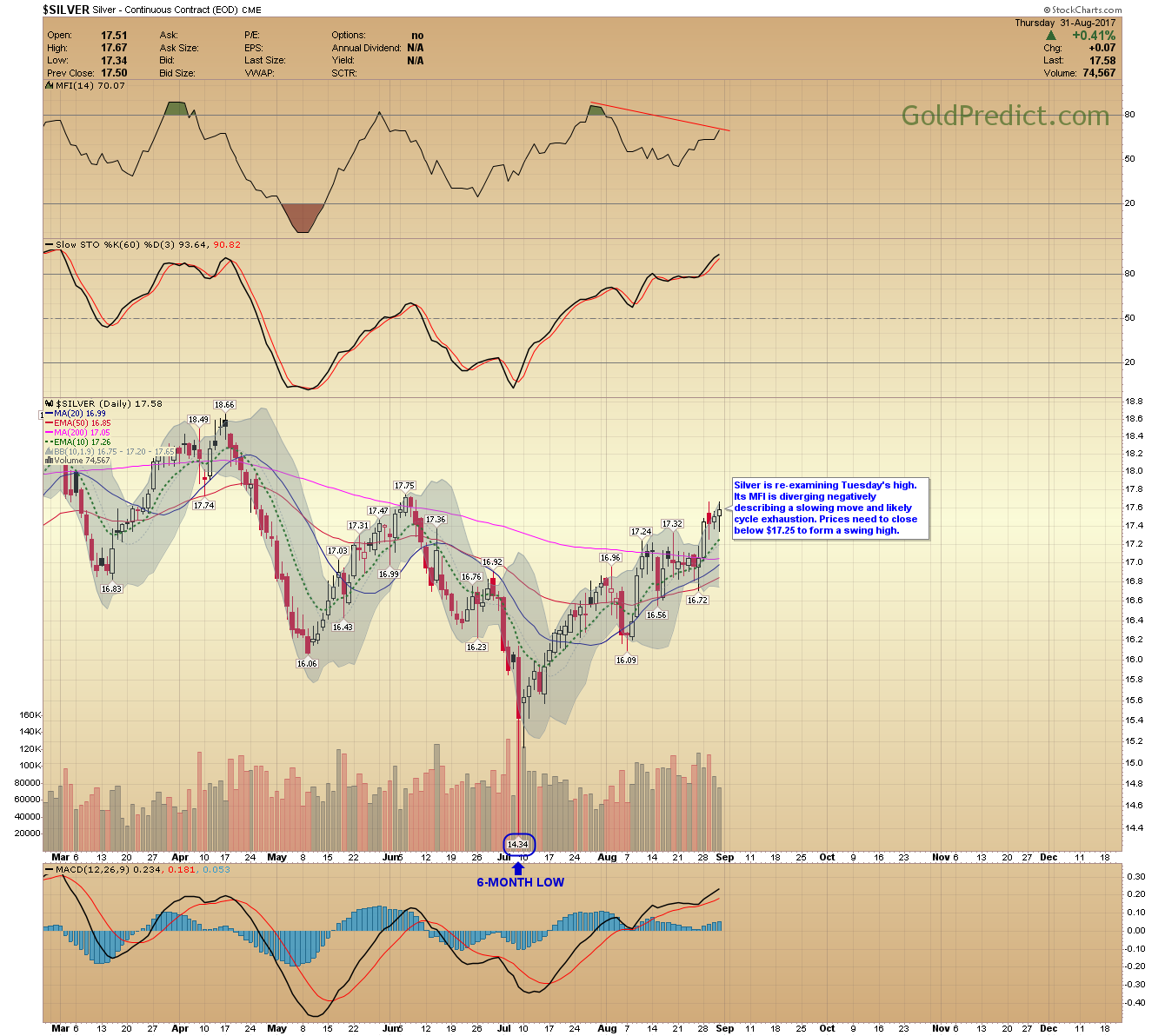 -GDX- Prices closed just two cents below Tuesday’s high. There is significant overhead resistance between $24.88 and $25.86. The MFI and Stochastics are overbought. It’s unlikely prices will rally beyond the resistance box on their first attempt. Cycle theory favors a decline into a mid-September daily cycle low. 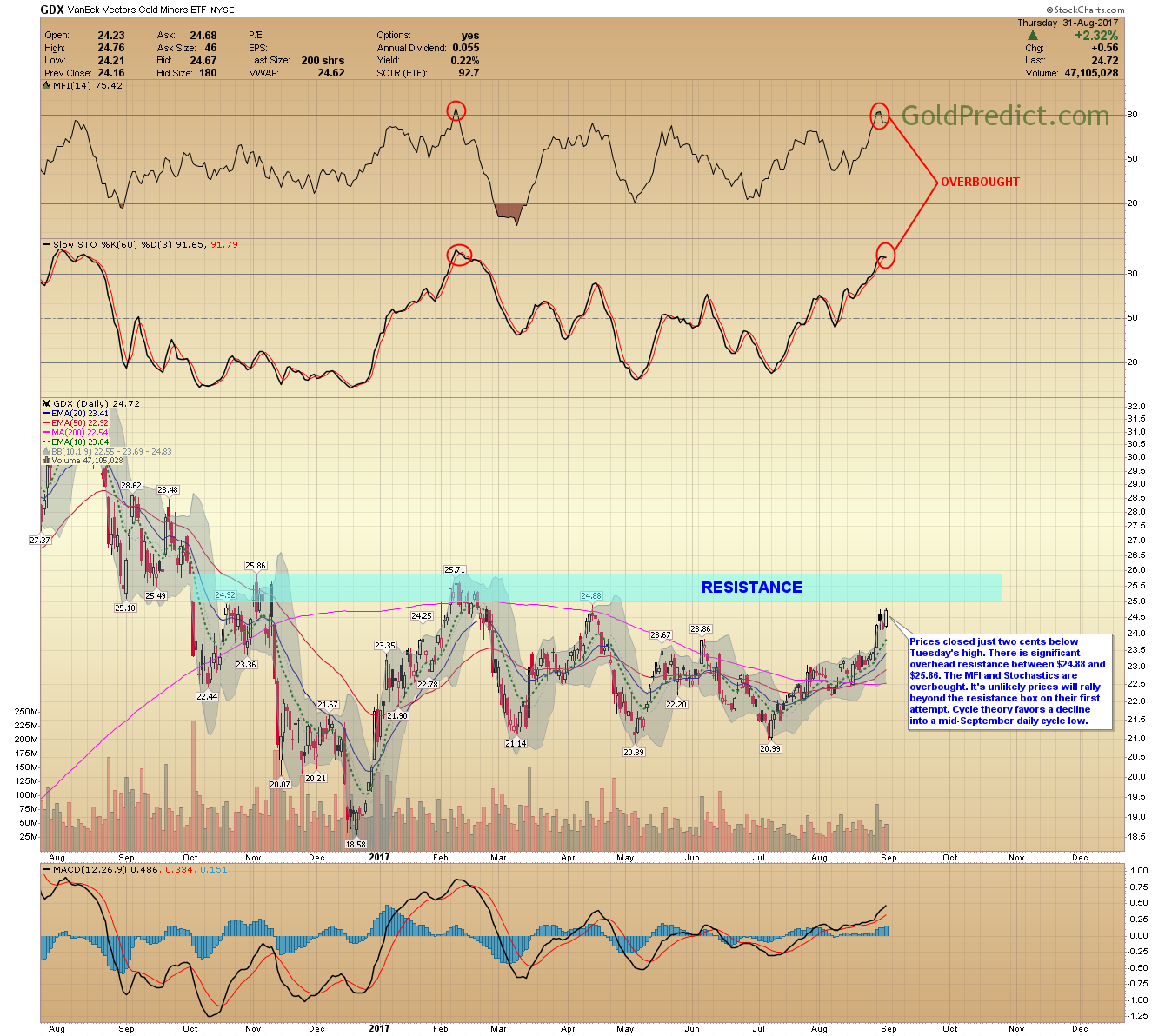 -GDXJ- Junior miners are also heading into resistance presenting overbought indicators. Buying now would be a risky proposition. I will look for a retest of the 200-day MA if prices drop into a daily cycle low. -SPY- Prices are climbing out of a cycle low and should push to new all-time highs. Volume has increased steadily since Monday supporting this rally. 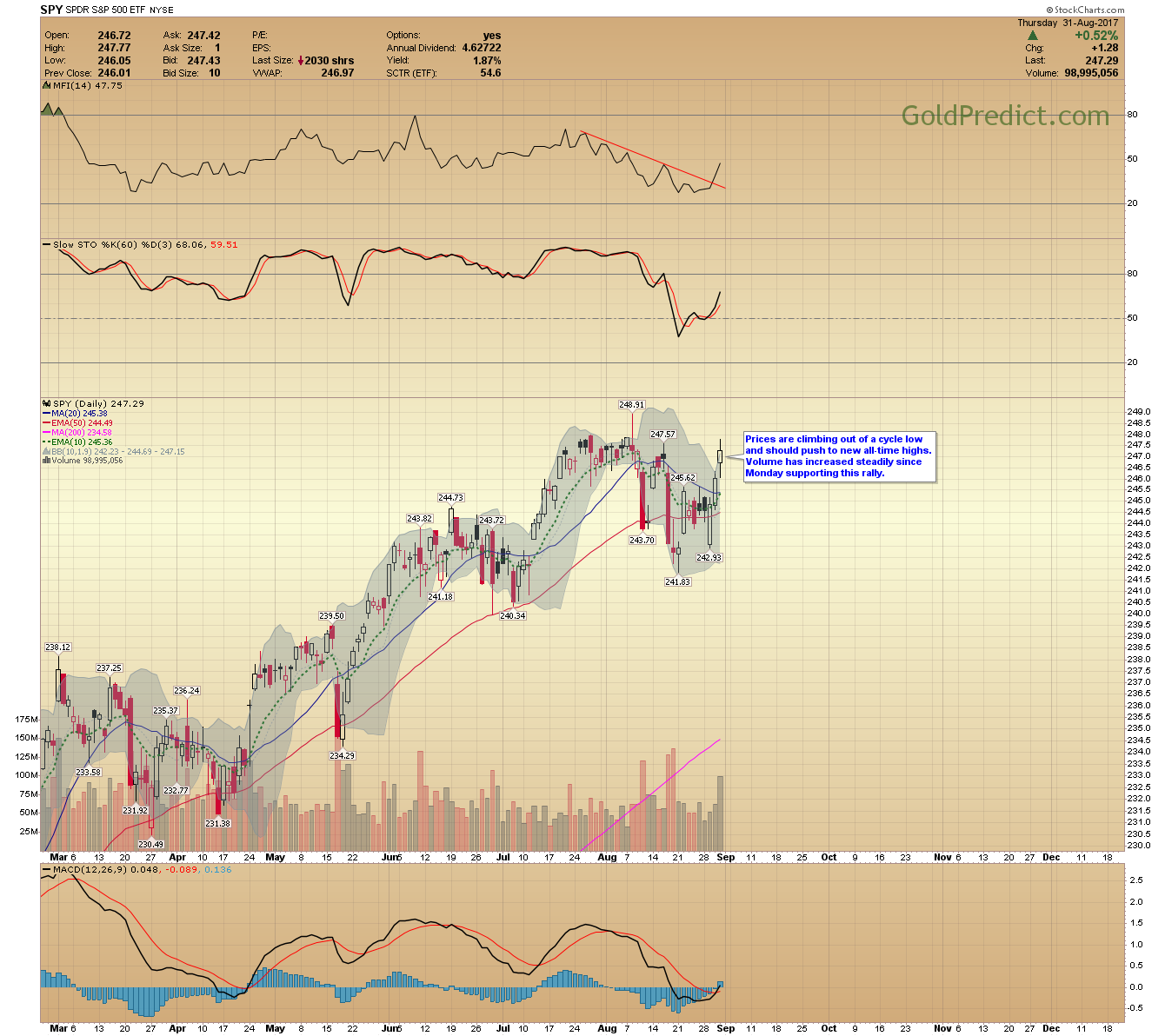 -WTIC- Oil closed back above $47.00; I was stopped out of SCO at $39.42. Crude declined much less than I foresaw. I find its resilience intriguing. If prices close above today’s high ($47.47), I’ll consider a long trade in energy. 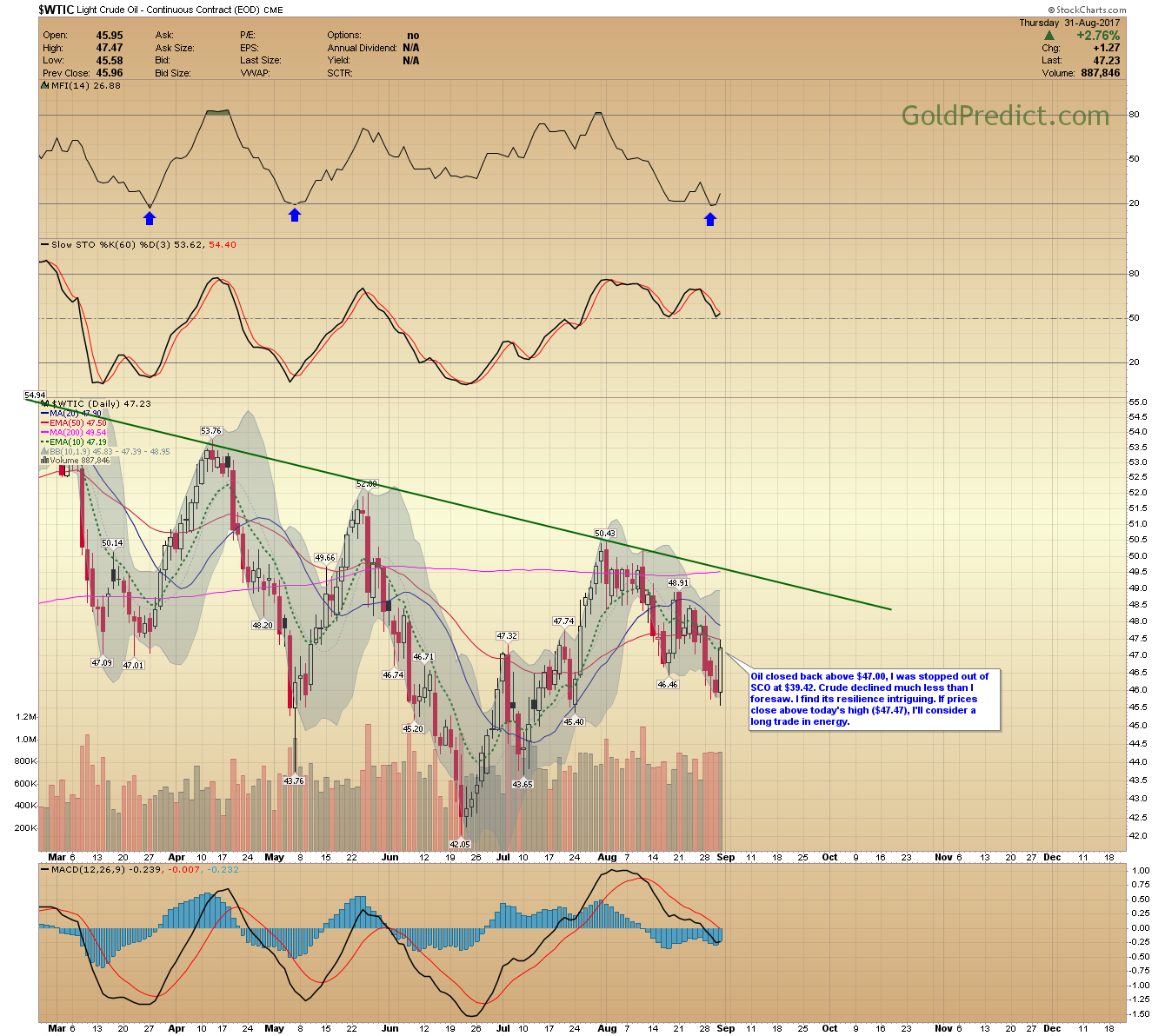 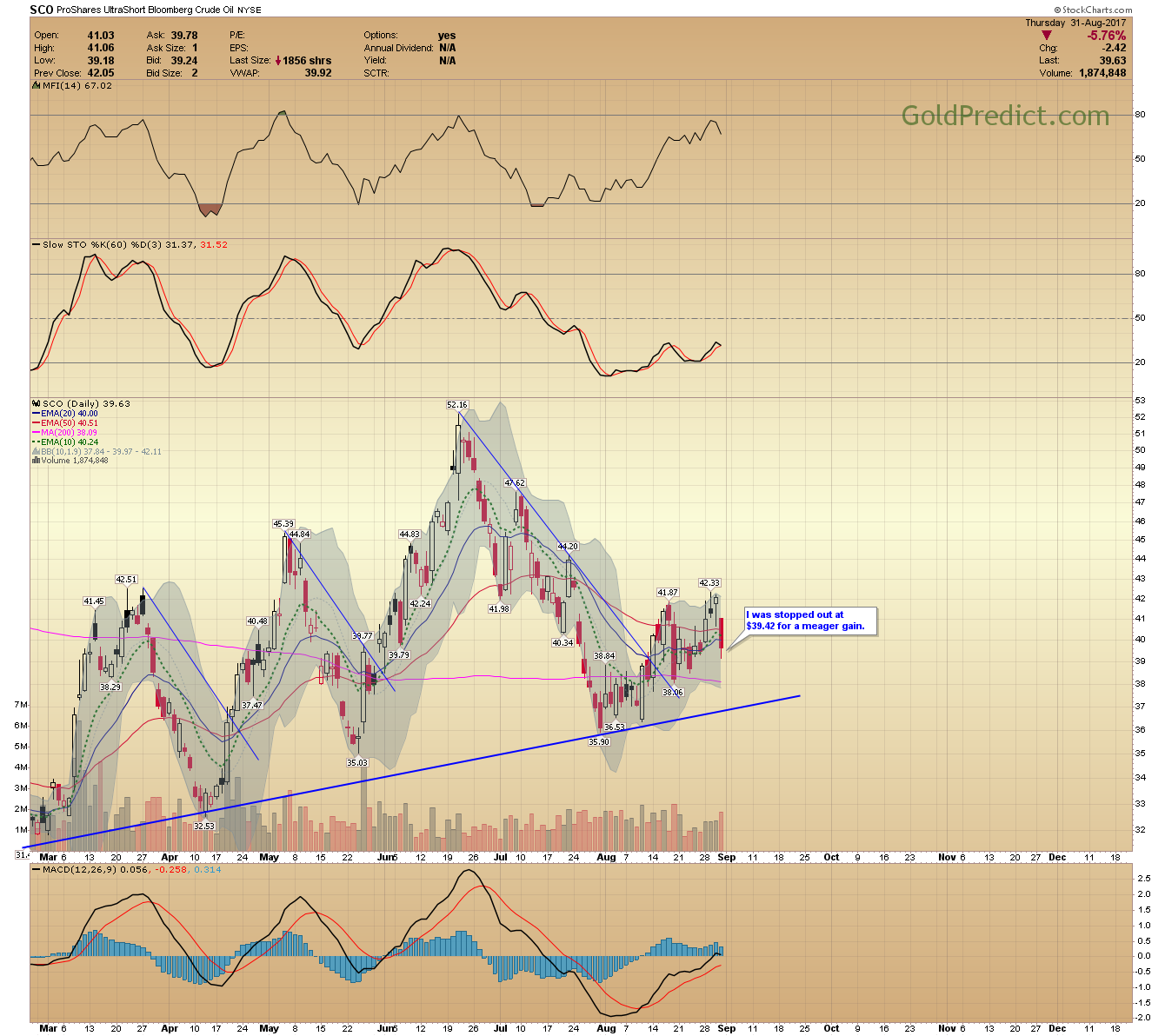 -XLE- Energy stocks are coming off the deepest oversold MFI reading to date. The move from $67.13 to $61.80 could be a washout low. Furthermore, energy stocks failed to make a lower low as oil declined into today’s low. Several signs point to a potential bottom. I’m considering a long trade in the triple leveraged version (ERX) of this fund. 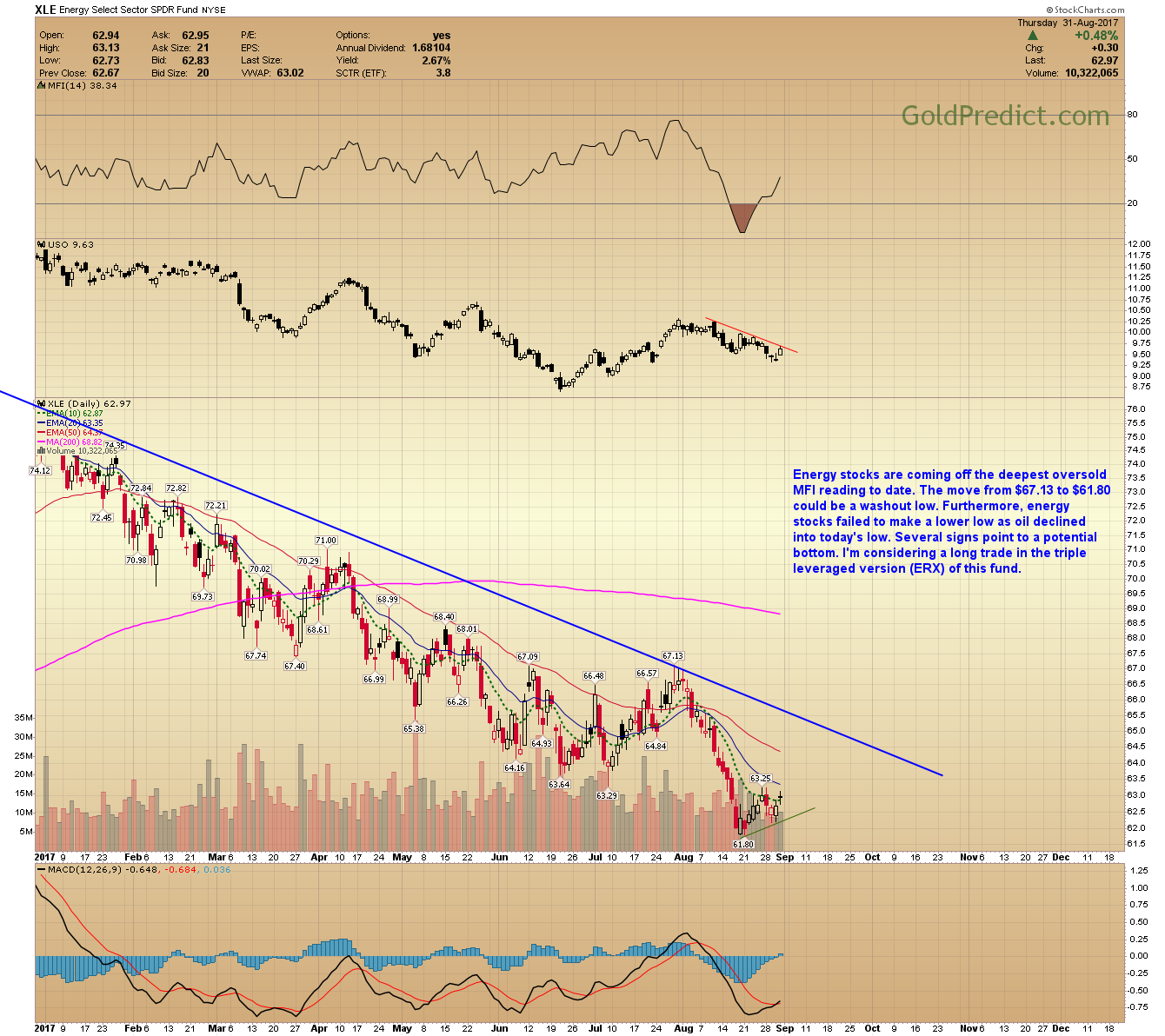 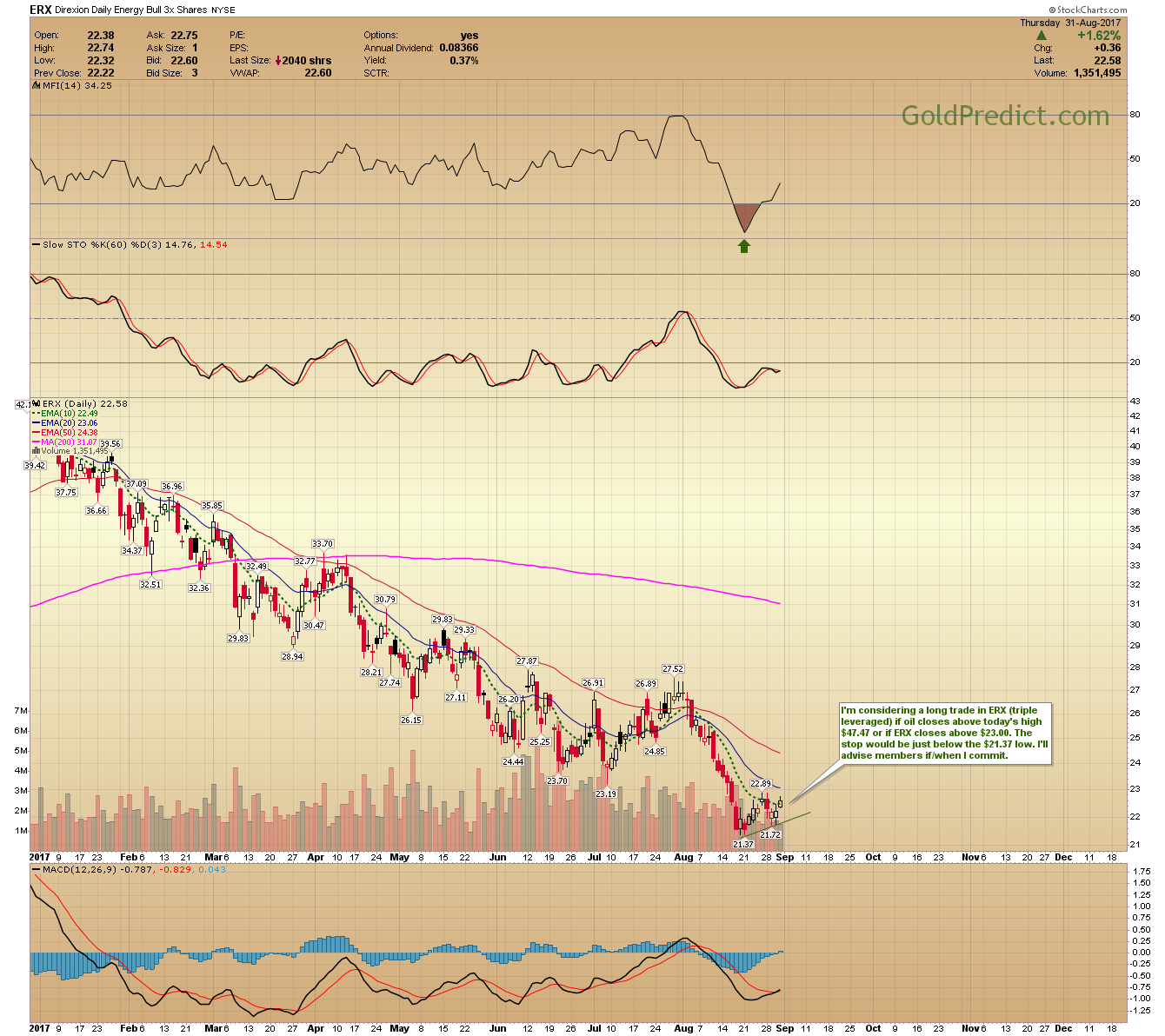 -DSLV- I set my stop just below the $21.74 low, it will likely get triggered tomorrow…unless the employment report saves me. 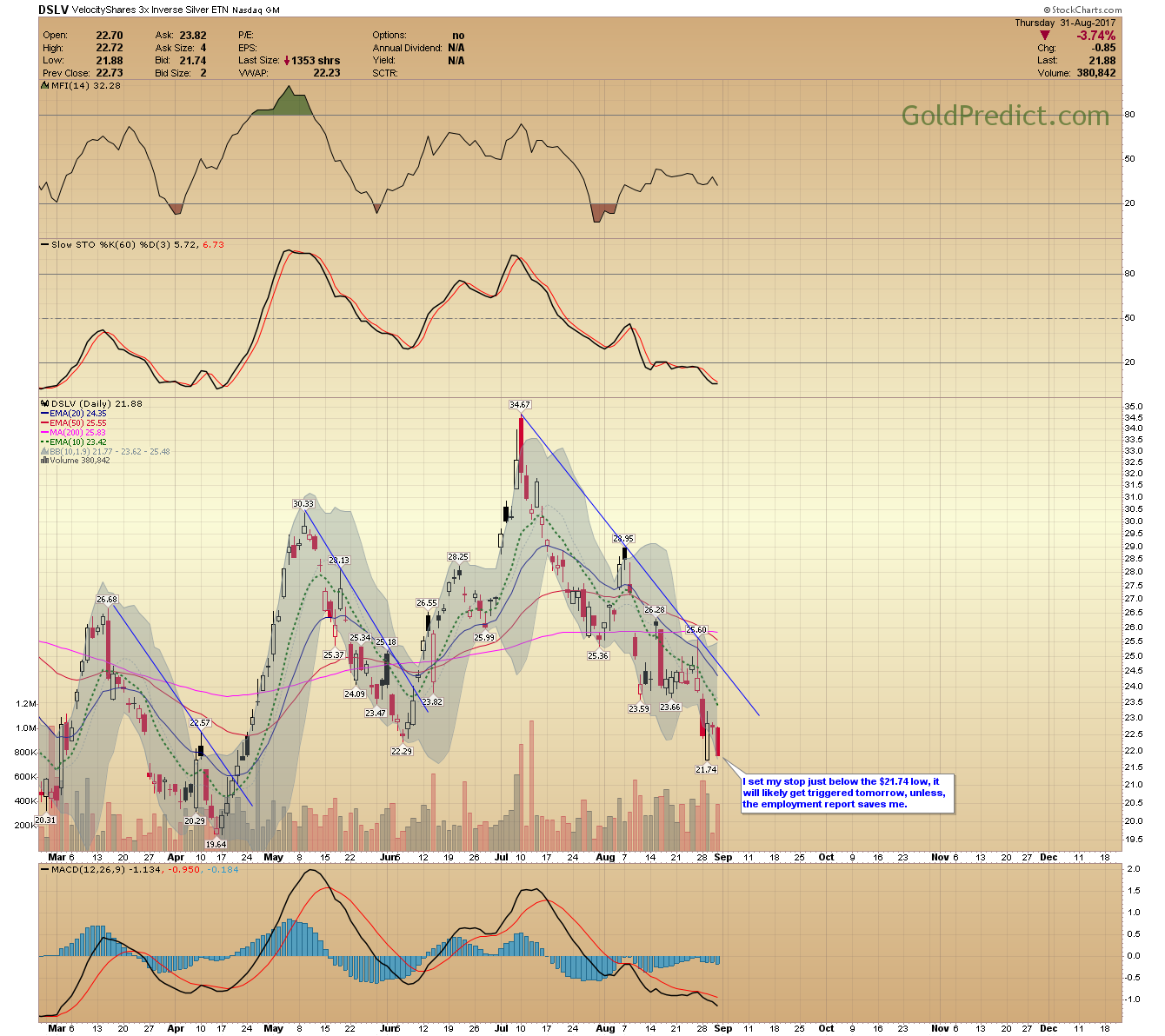 I’ll try to post a brief update in the morning.

This article was published Posted on August 31, 2017 in Categories Reports