I’d like to start the Weekend Newsletter with a big picture review of the gold and silver markets. It’s easy to get lost in the day-to-day fluctuations. When cycles stretch, I find taking a step back essential. 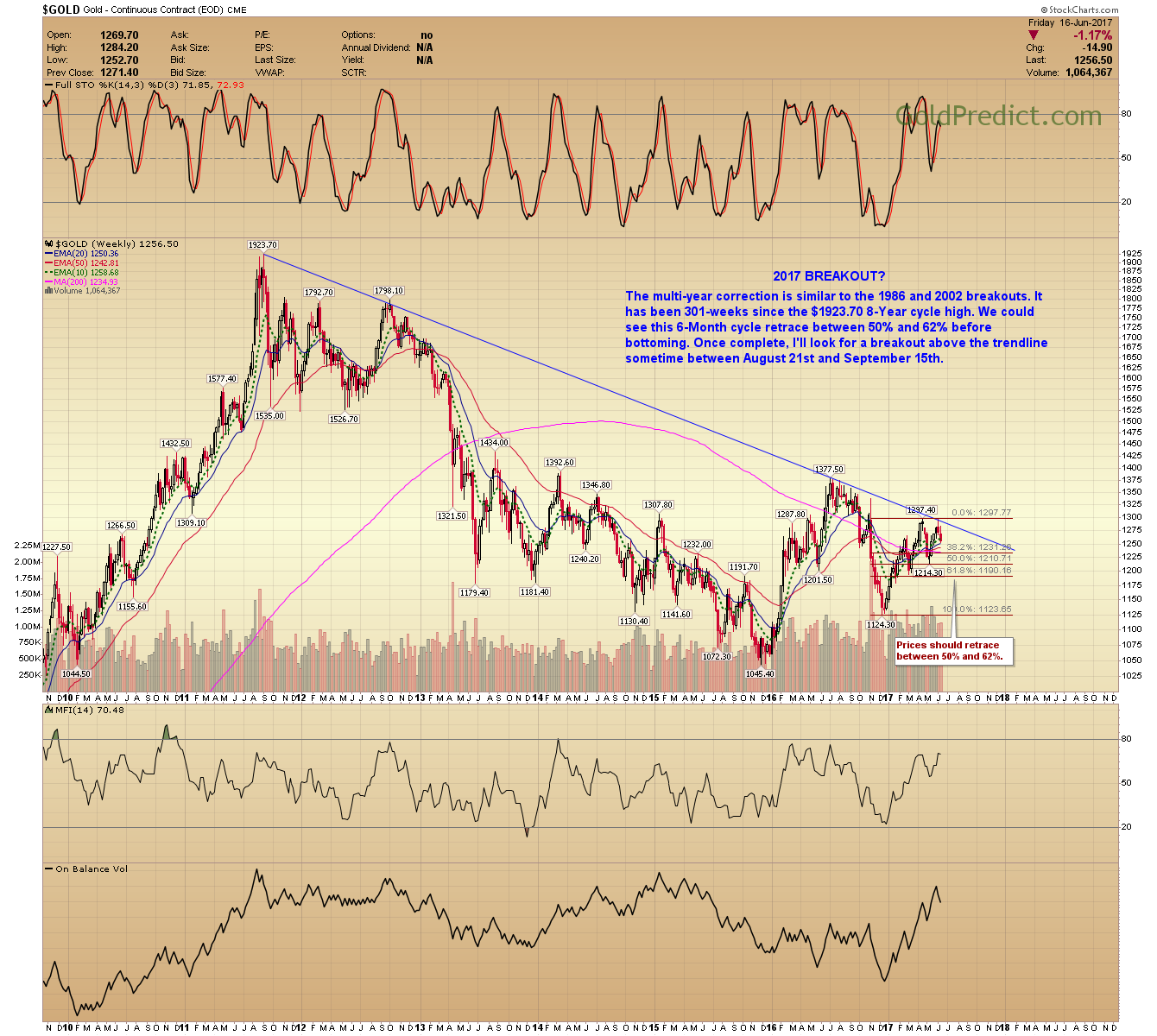 Prices followed the forecast precisely, bottoming at $1,204 (retracement between $1,210 and $1,190). Regrettably, I changed my outlook due to the unyielding dollar. I found it unlikely gold would form a 6-month low with the dollar so deeply oversold. Typically, the dollar tops while gold bottoms and vice versa. I altered my forecast to adjust to the dollar weakness; it proved to be a mistake.

-GOLD MONTHLY (BIG PICTURE)- Prices are just breaking above the 6-year trendline, similar to the 2002 breakout. A series of higher highs and higher lows should lead to a retest of the $1,923 high in 2019. From there, I expect a multi-month consolidation phase as prices build momentum to clear $2,000. 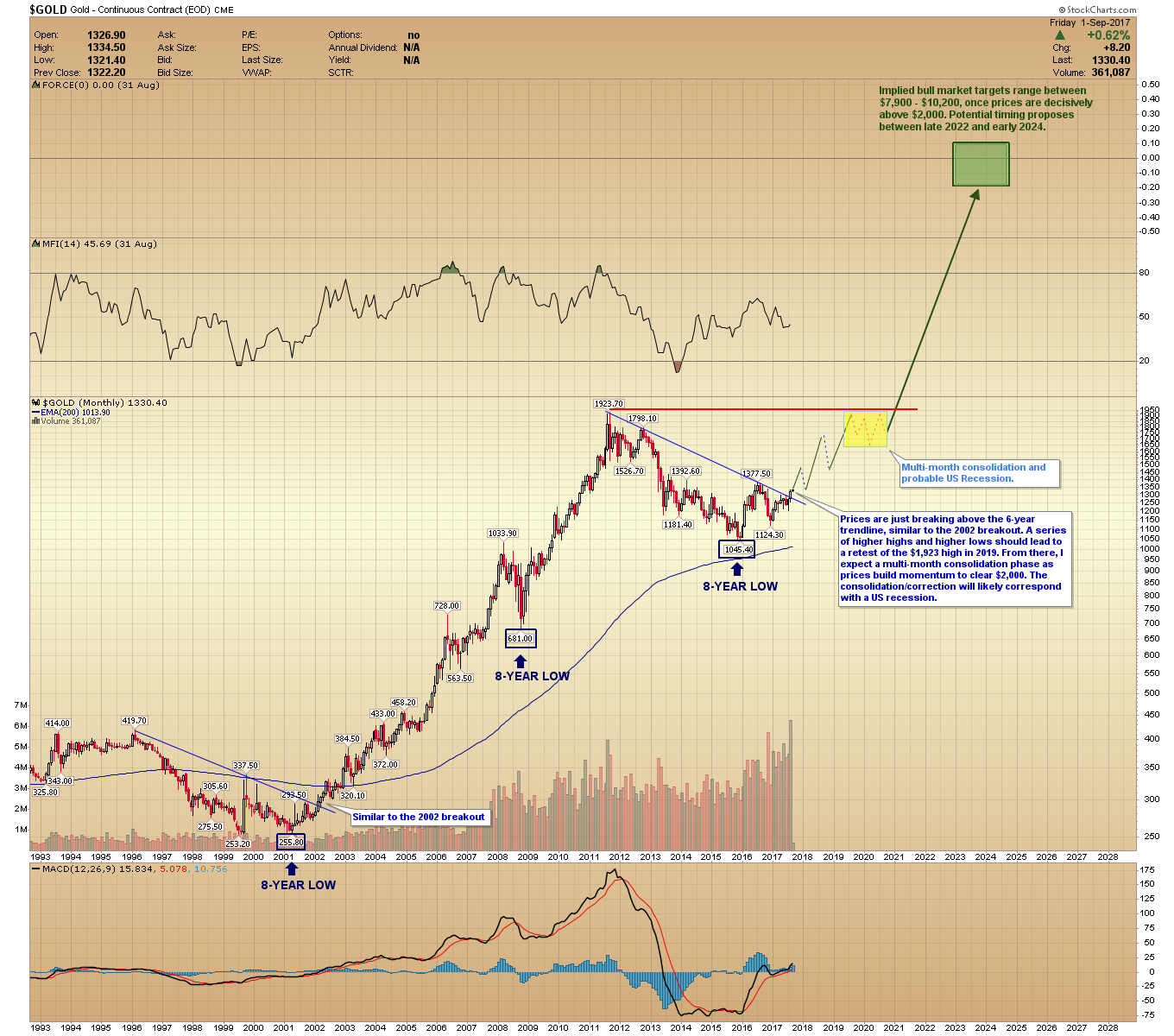 -SILVER’S QUARTERLY CHART- Prices are forming a massive, multi-decade, consolidation pattern below $50.00. Breaking out above $50.00 would project a minimum target of $170. However, the multi-decade pattern proposes targets over $300/oz. 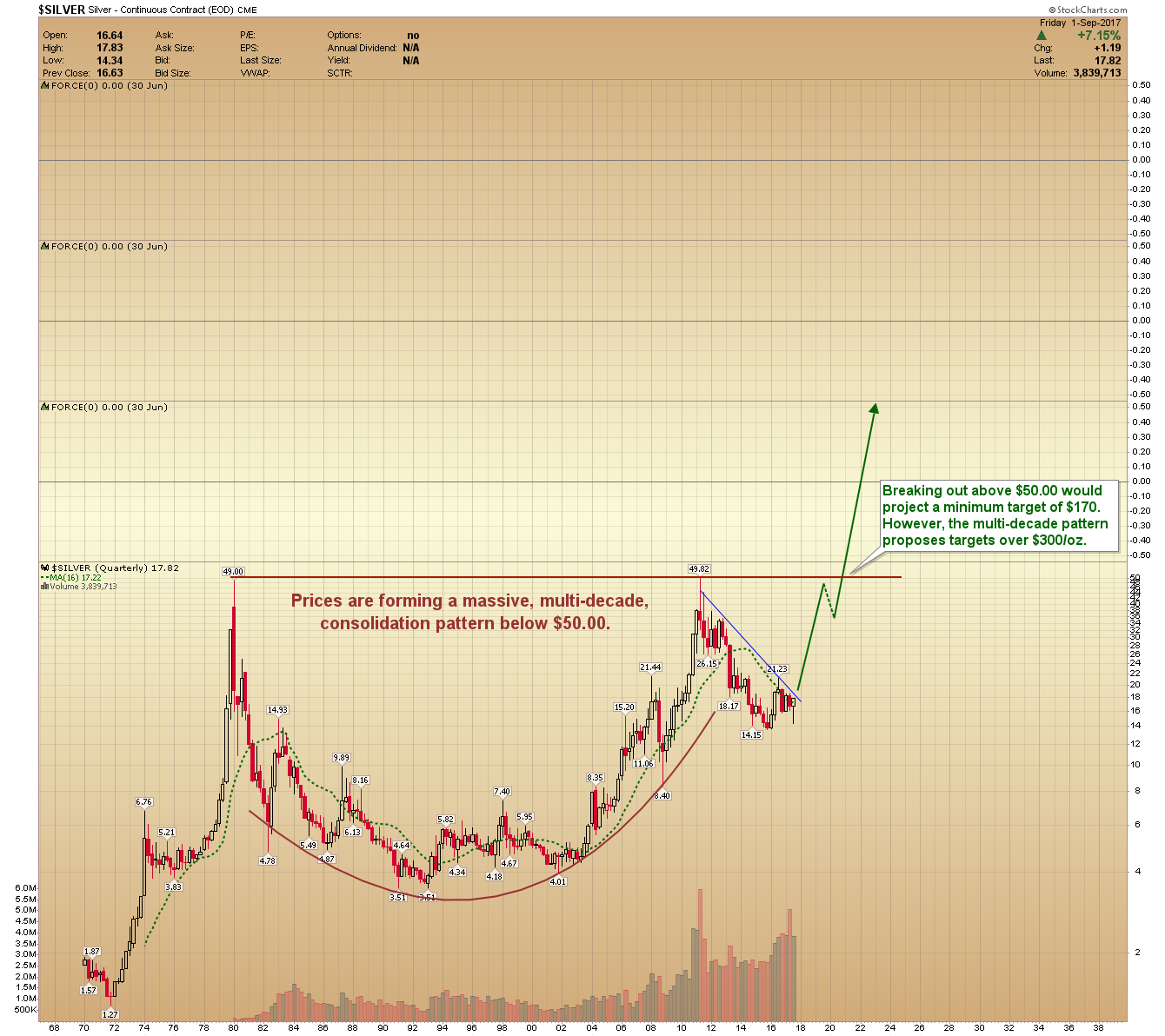 No matter how you feel now, we are in still in the very early stages of a budding bull market. Long-term investors can buy the dips and expect spectacular gains as the bull market matures. The LONG-TERM STRATEGY released May 12th, 2017 discusses the value of a core position.

-US DOLLAR WEEKLY- Prices undercut the 91.88 level and reversed to close positive for the week. The 2015 and 2016 lows formed similarly. Will prices finally rebound? Note: Stochastics rallied to new highs as prices dropped into last weeks low. 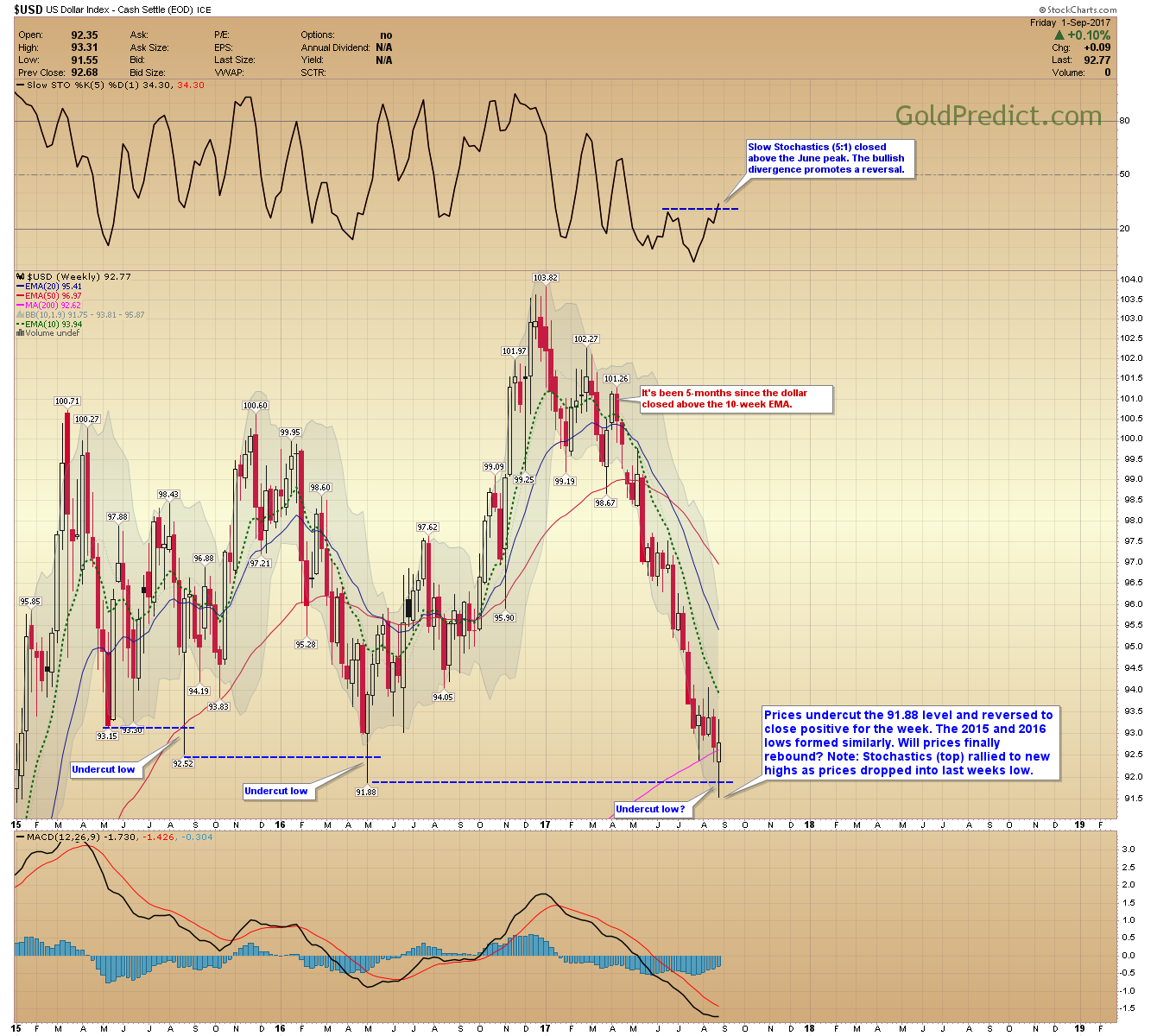 -US DOLLAR DAILY- The dollar formed a reversal candle on Friday’s employment report. A daily close above the 93.31 high will confirm an intermediate low. If established, expect a rebound to test the trendline. 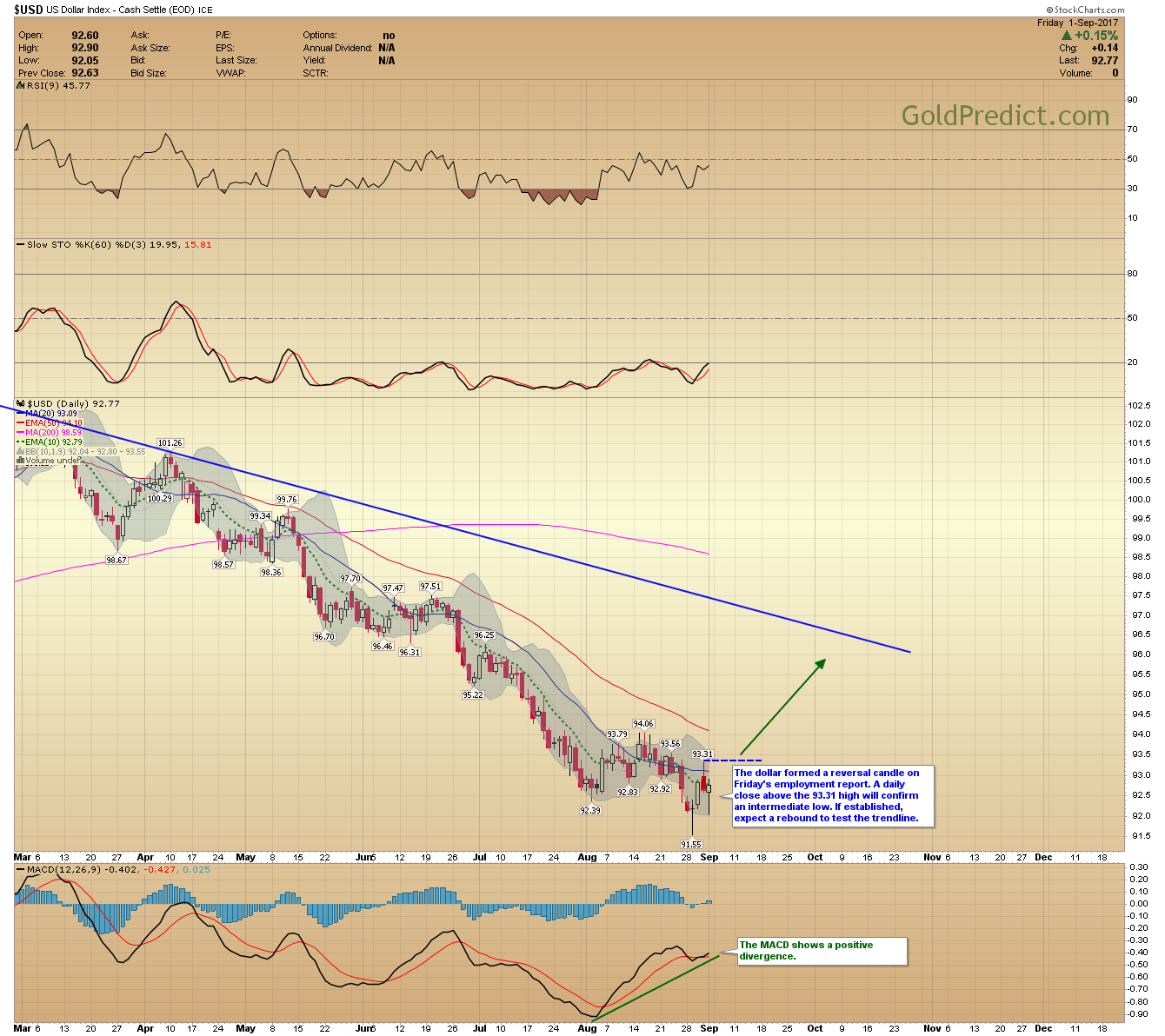 -GOLD WEEKLY- Prices are above the trendline, and a bull market is confirmed. The COT reveals commercial traders increased their short positions 7-weeks consecutively by 145,325 contracts. The dramatic expansion supports a short-term pullback. Prices should find support around the $1,300 level if executed. 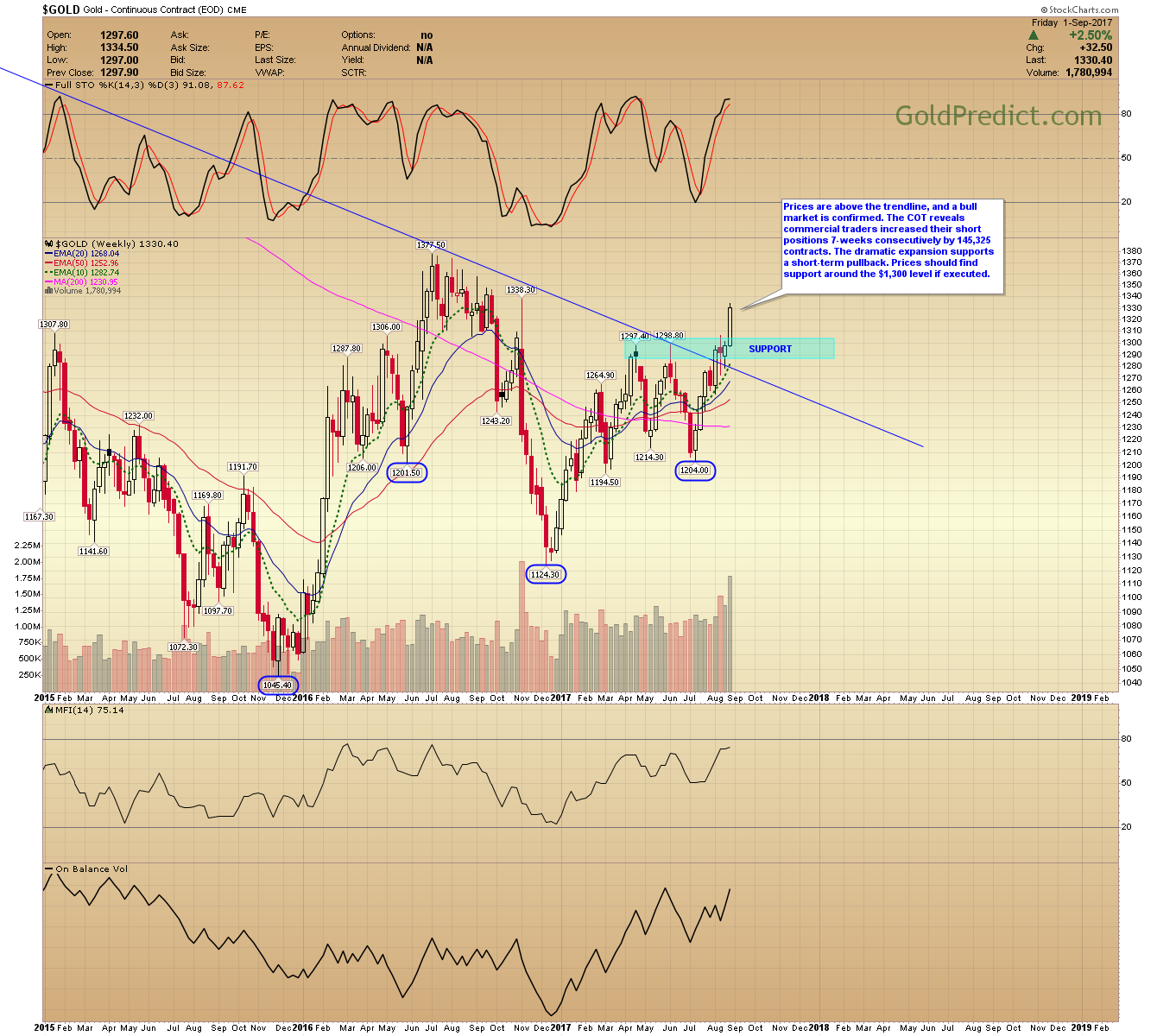 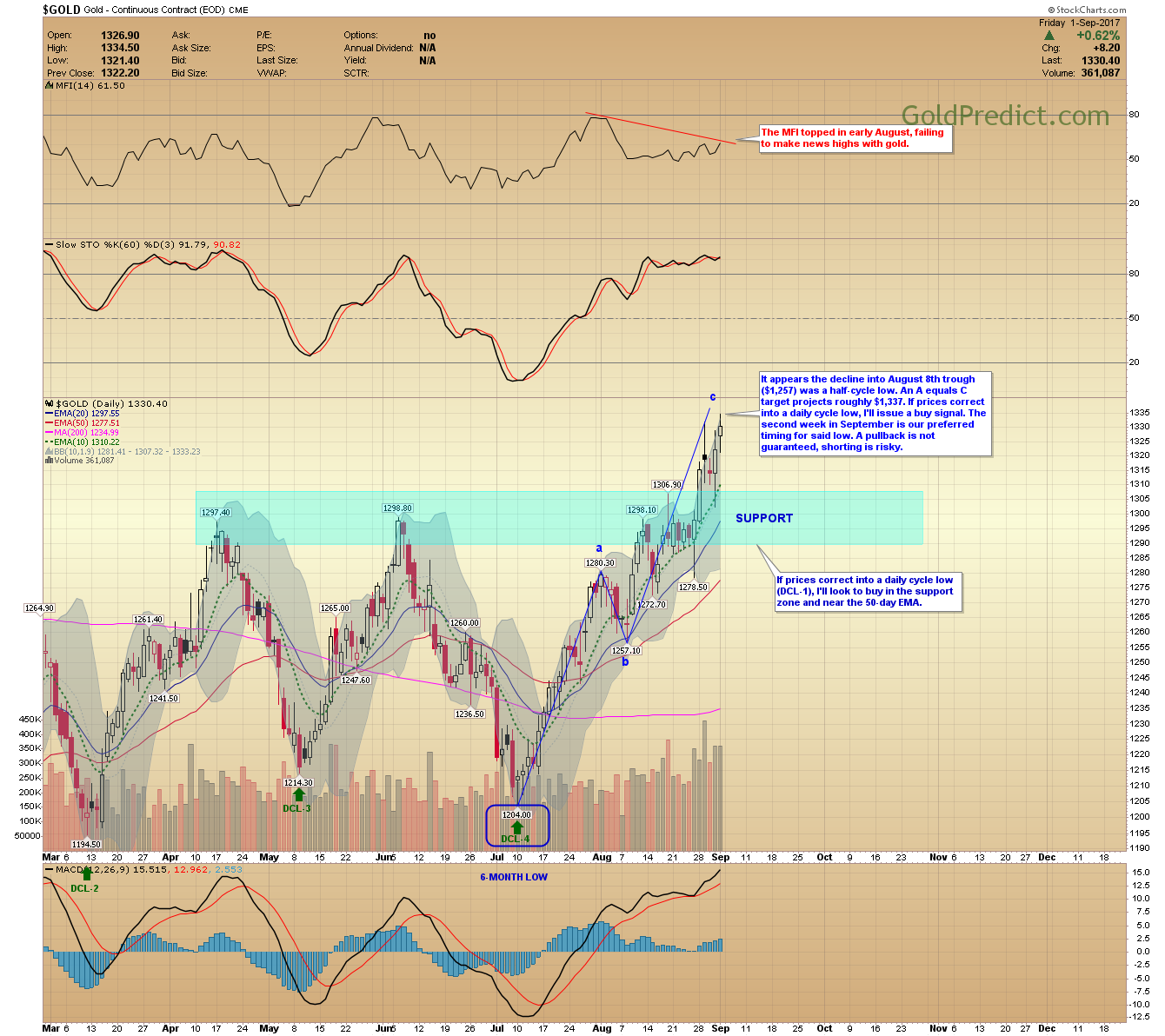 -SILVER WEEKLY- Prices closed above the June high and will likely challenge $18.00. The $17.00 level has become support if prices decline into a daily cycle low. 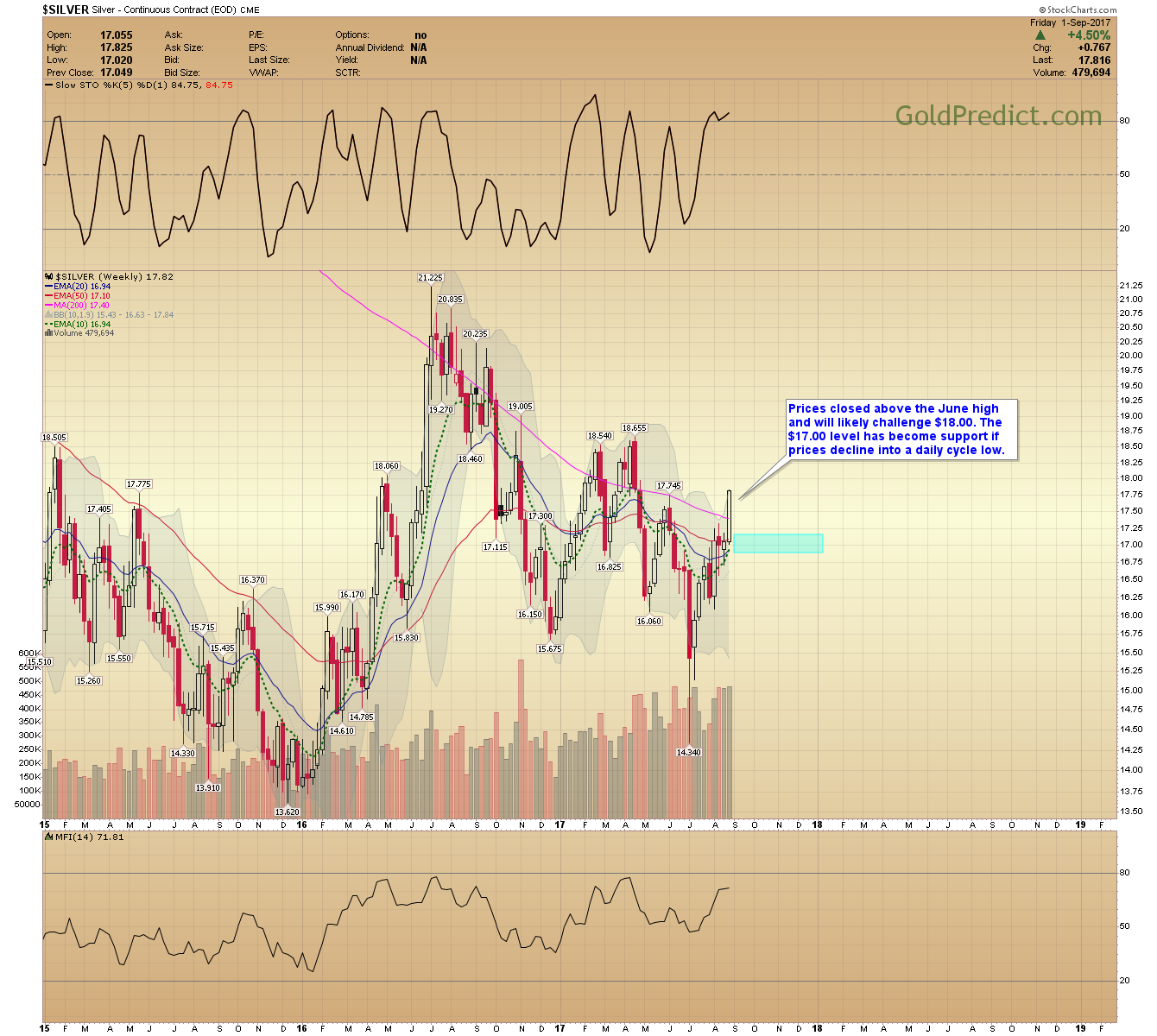 -SILVER DAILY- I’ll look to buy silver if prices pullback to around the 200-day MA. 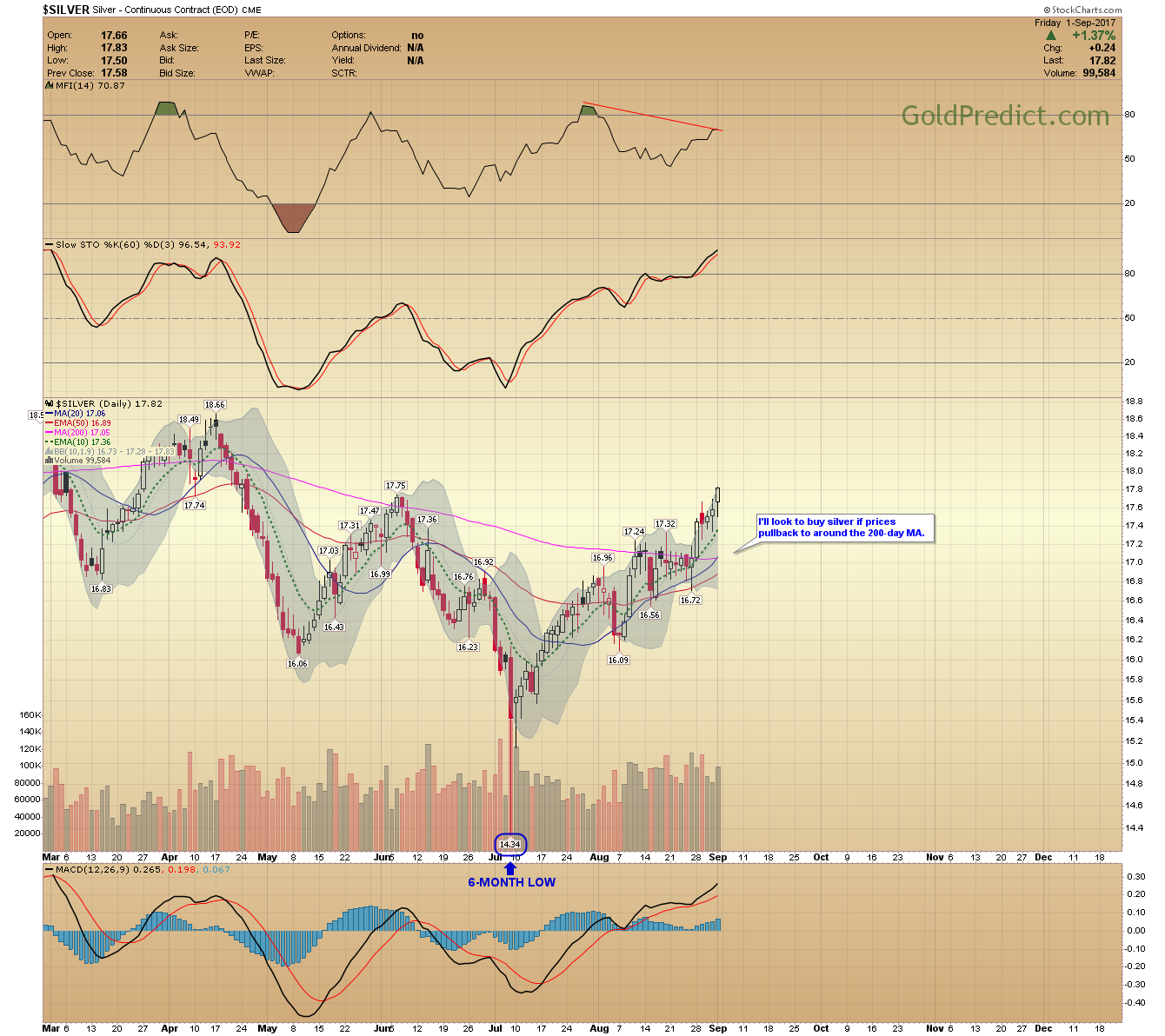 -GDX- Prices are overbought heading into resistance. I’ll look to buy miners in mid-September if gold drops into its daily cycle low. 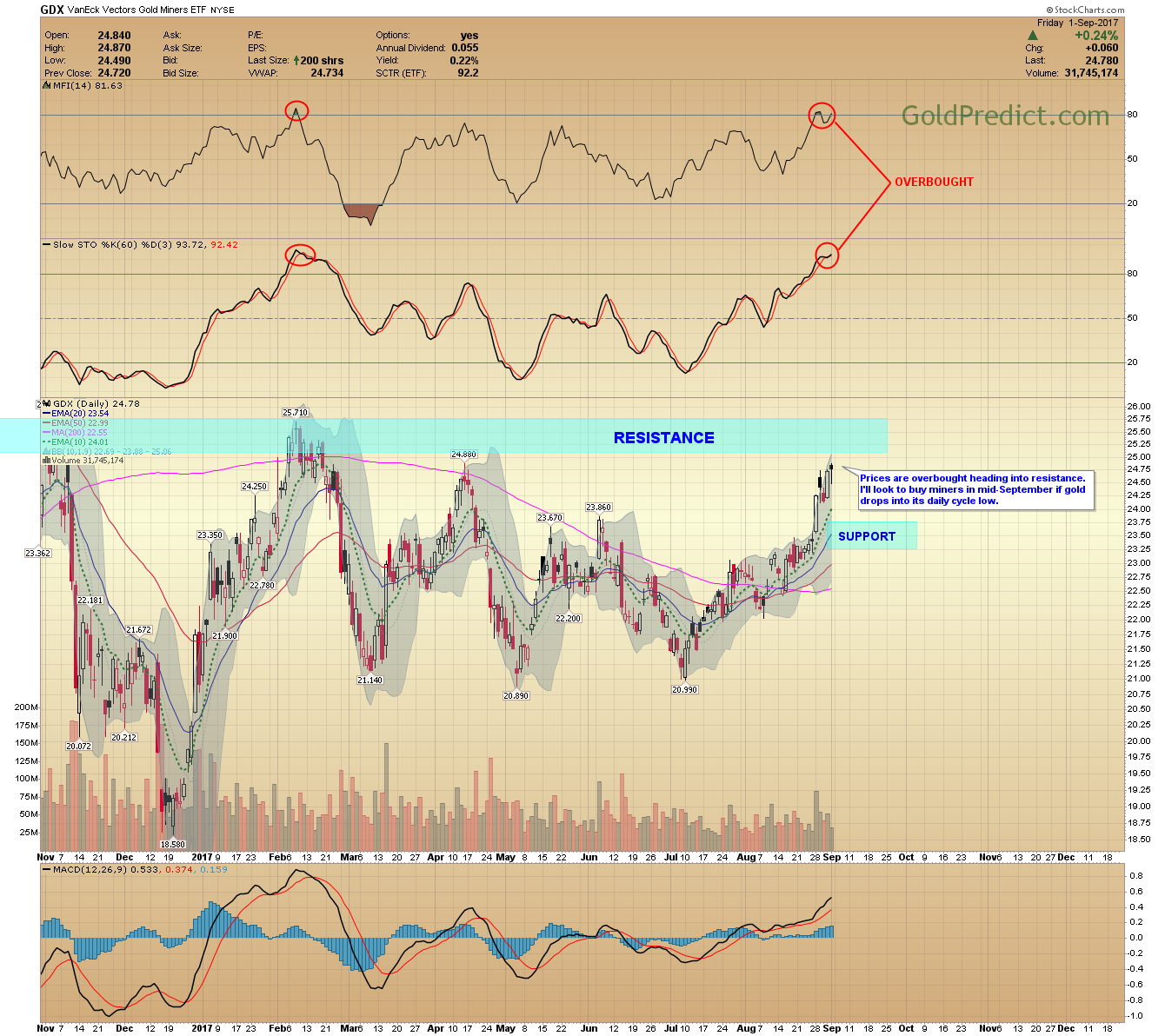 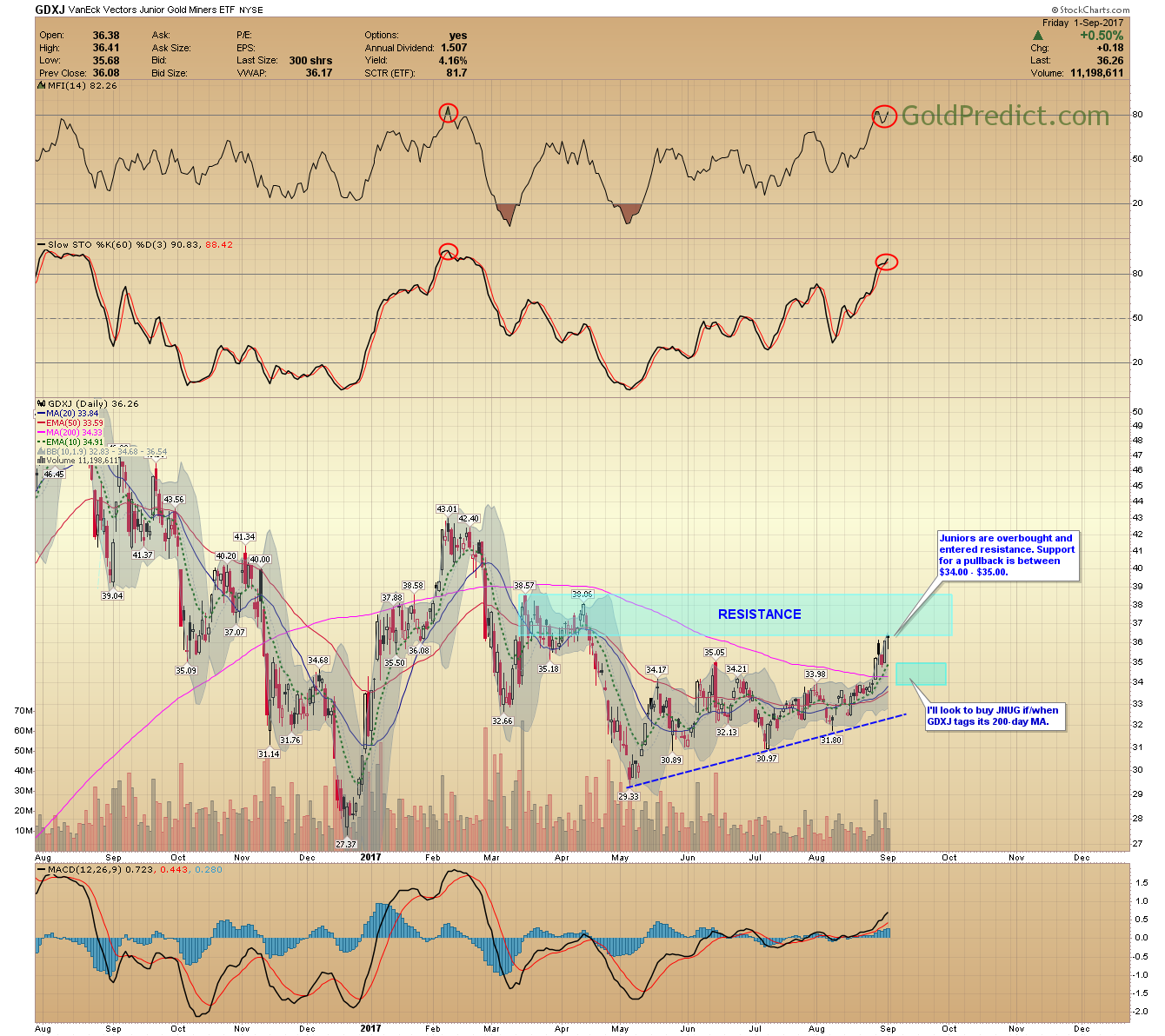 -SPY- There was considerable selling into strength numbers on Friday (930-million), denoting potential distribution. We could see a top in September followed by a sharp correction in October. 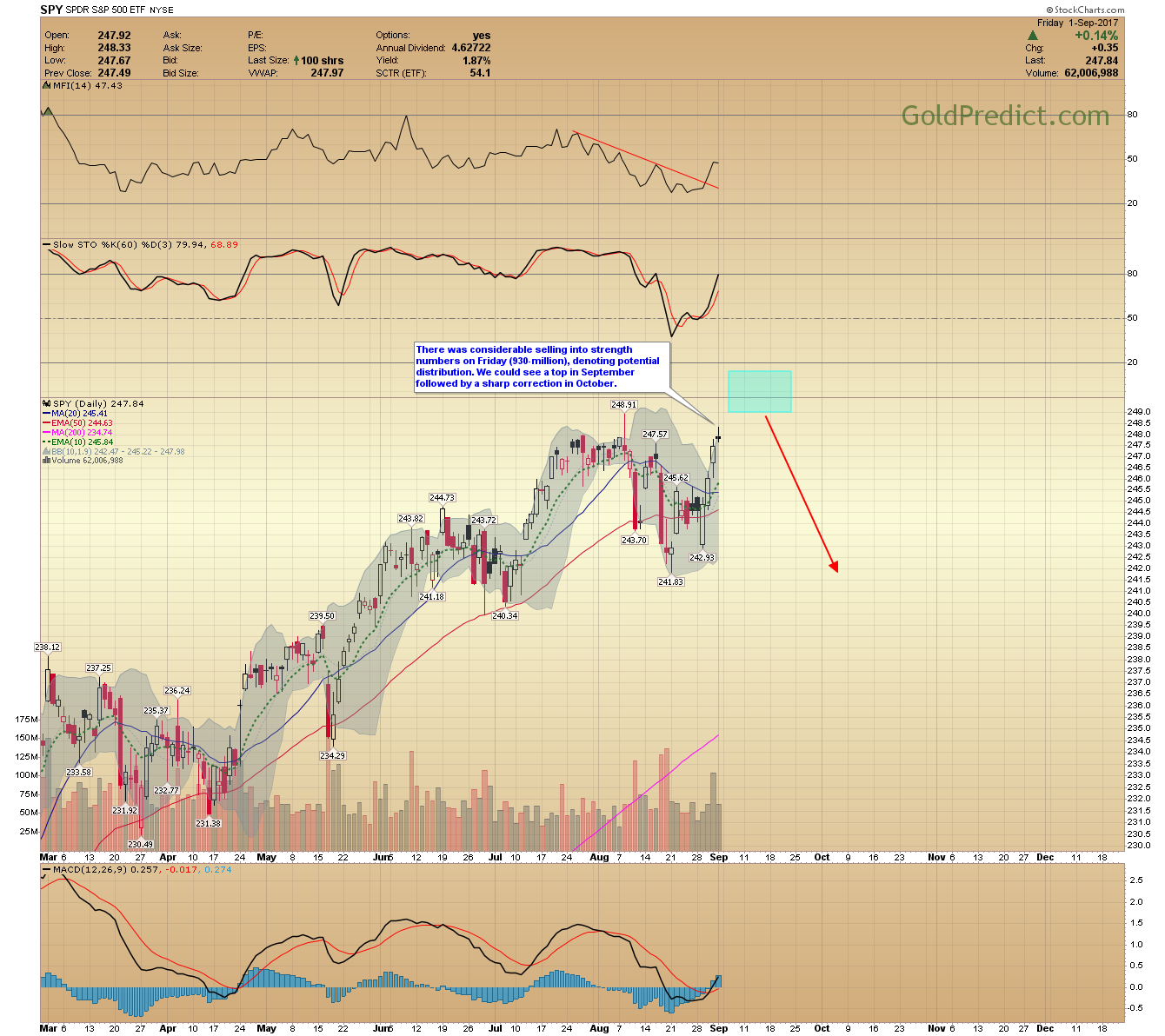 -WTIC- I think we will see a reflation trade (commodities rally) during the last quarter of 2017. Oil may have bottomed. I’d like to see prices close distinctly above $47.47 to increase those odds. 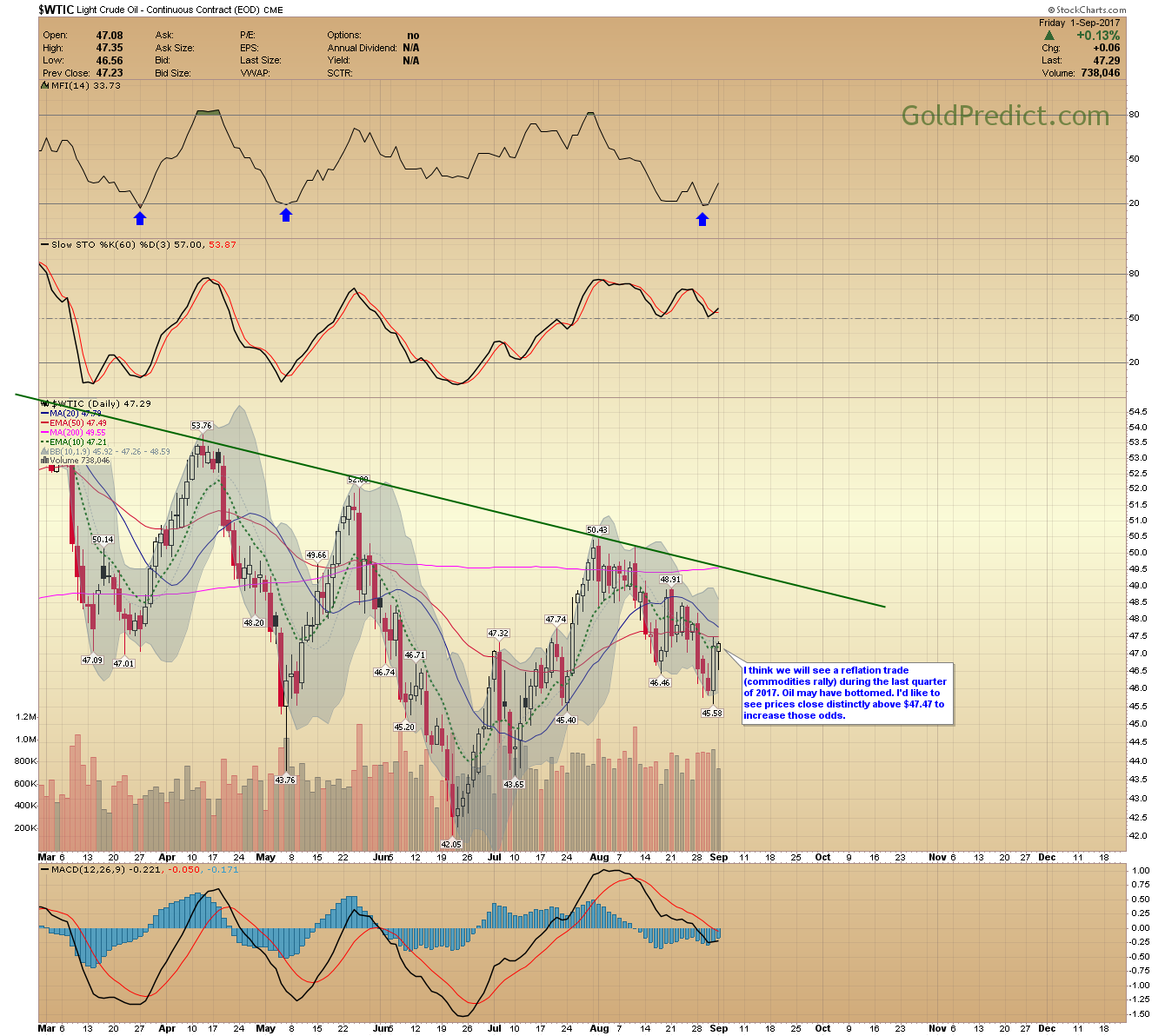 -ERX- Prices diverged positively as oil dropped to the recent low. Energy stocks may have bottomed after an 8-month decline. I’d like to see oil close above $47.47 before committing to ERX. The stop would be just below the $21.37 low. 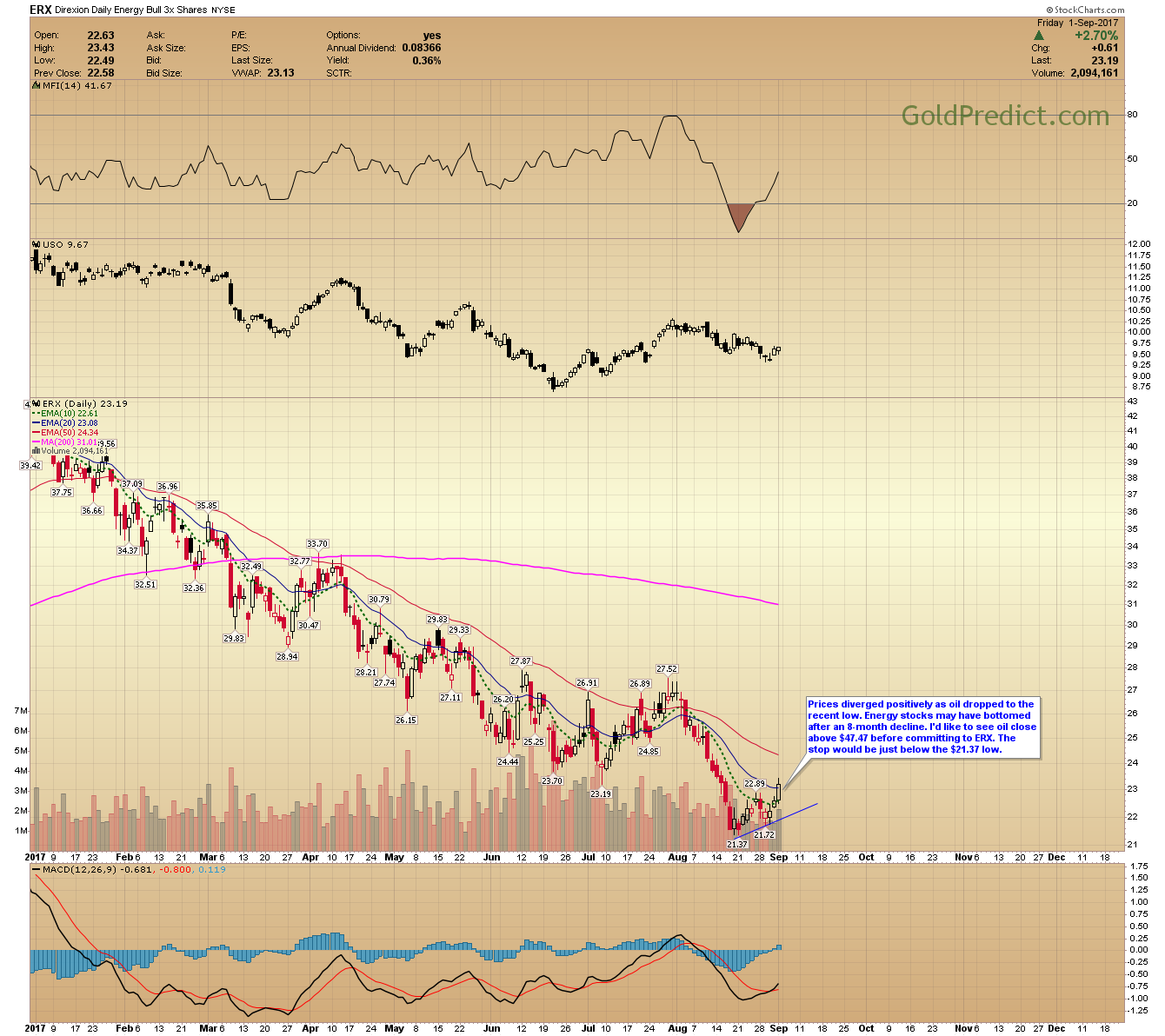 Metals and Miners are overbought on a short-term basis. Prices could continue higher, but I prefer waiting for a pullback. I’ll be on the lookout for a buying oppertunity during the second week in September.

This article was published Posted on September 3, 2017 in Categories Weekend Newsletters