Metals and Miners declined Friday. They could be setting up to break the October lows next week. Gold dropping below $1,262 will sustain a drop to $1,180 – $1,205 over the next several weeks. If established, prices should bottom in early to mid-December.

The weekly gold chart illustrates a low-profile “V” shaped basing pattern. The pattern has matured over the last 4-years and is nearing completion. The multi-year basing period will ultimately become the launch pad for an exceptional bull market.

Several factors support a decline into a meaningful 6-month cycle low. The setup is there, all we need is some downside follow through. Neglecting to decline next week will prolong the trendless condition.

-US DOLLAR- The dollar is again probing the neckline near 94.10. Prices need to turn higher soon to prevent a breakdown. Closing below the 50-day EMA (93.75) would be detrimental. The rebound target will activate with a daily close above 95.07. 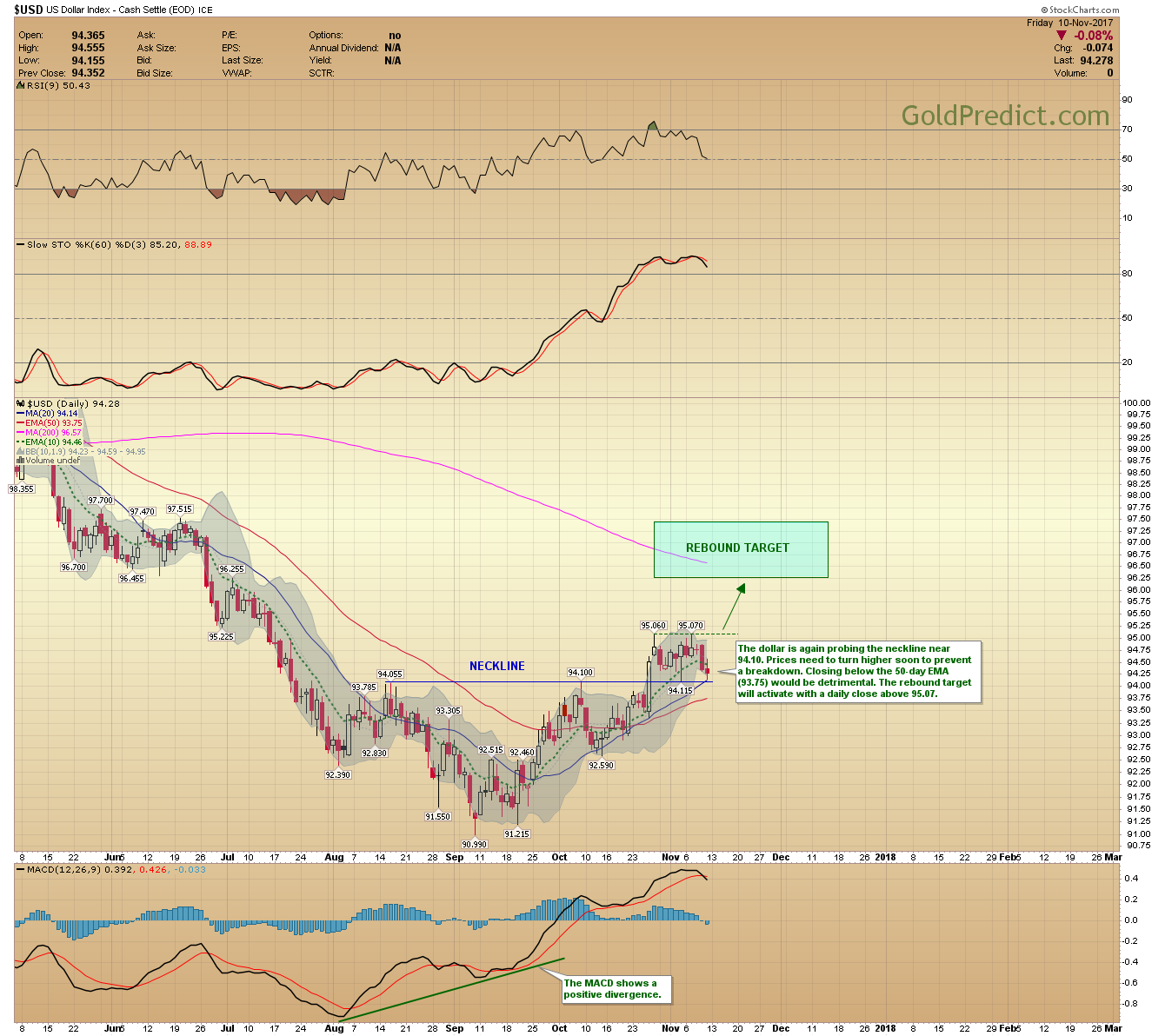 -GOLD WEEKLY- The basing pattern appears to be forming a low-profile symmetrical “V” type configuration. Breaking the October low ($1,262) will prescribe a decline to the rising trendline around $1,200. Symmetrically speaking, prices could reach the 2013 equivalent (pink arrow) around $1,180.

The prolonged basing pattern has been difficult to navigate. I made a few missteps along the way. Nevertheless, a discernable pattern has emerged, and the structure advises a breakout in 2018. 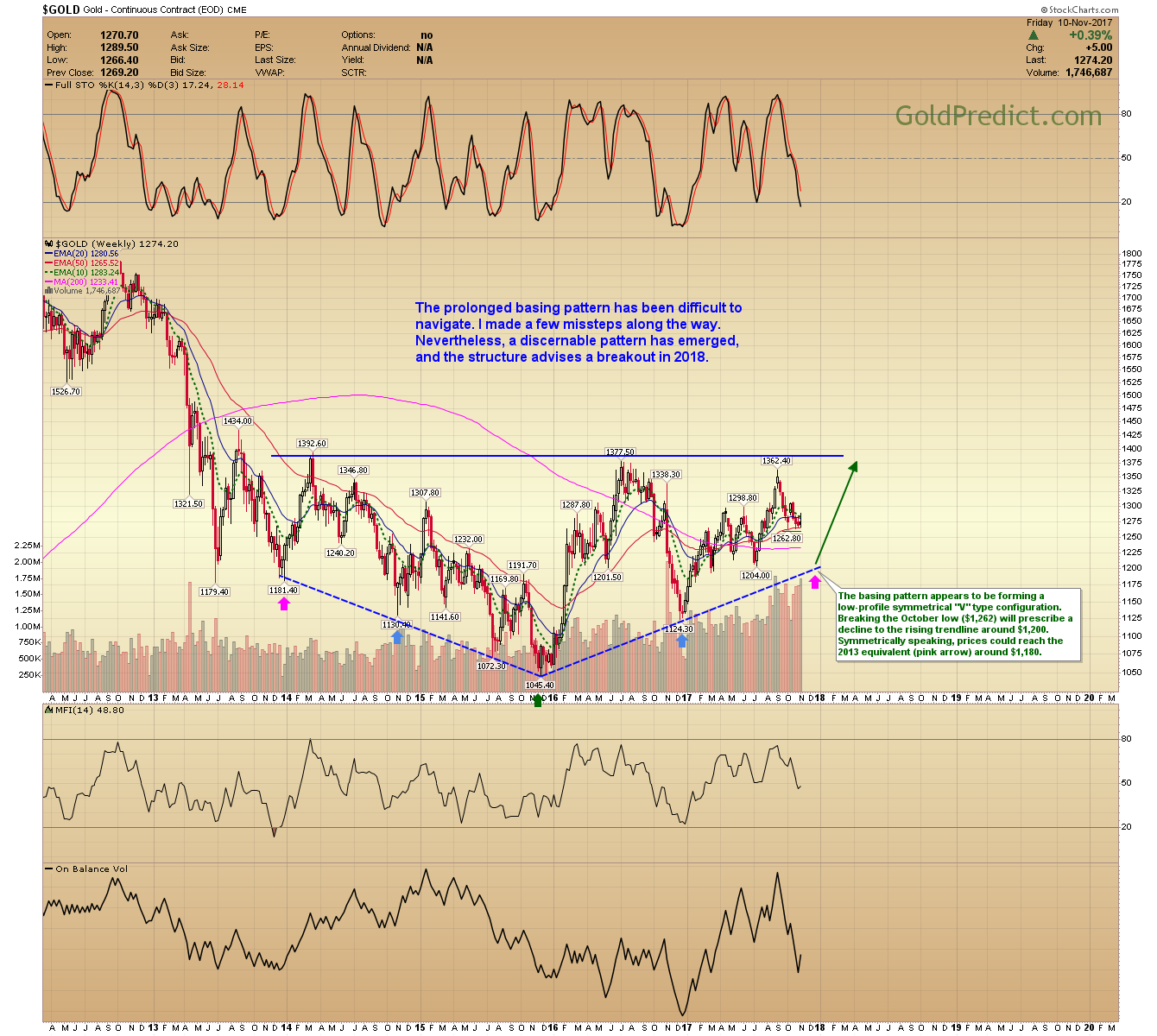 -GOLD DAILY- Prices formed a swing high on the 24th day, we may have a top. If the cycle peaked, prices should break the October low sometime next week. Failing to break lower will leave us in trendless confusion. 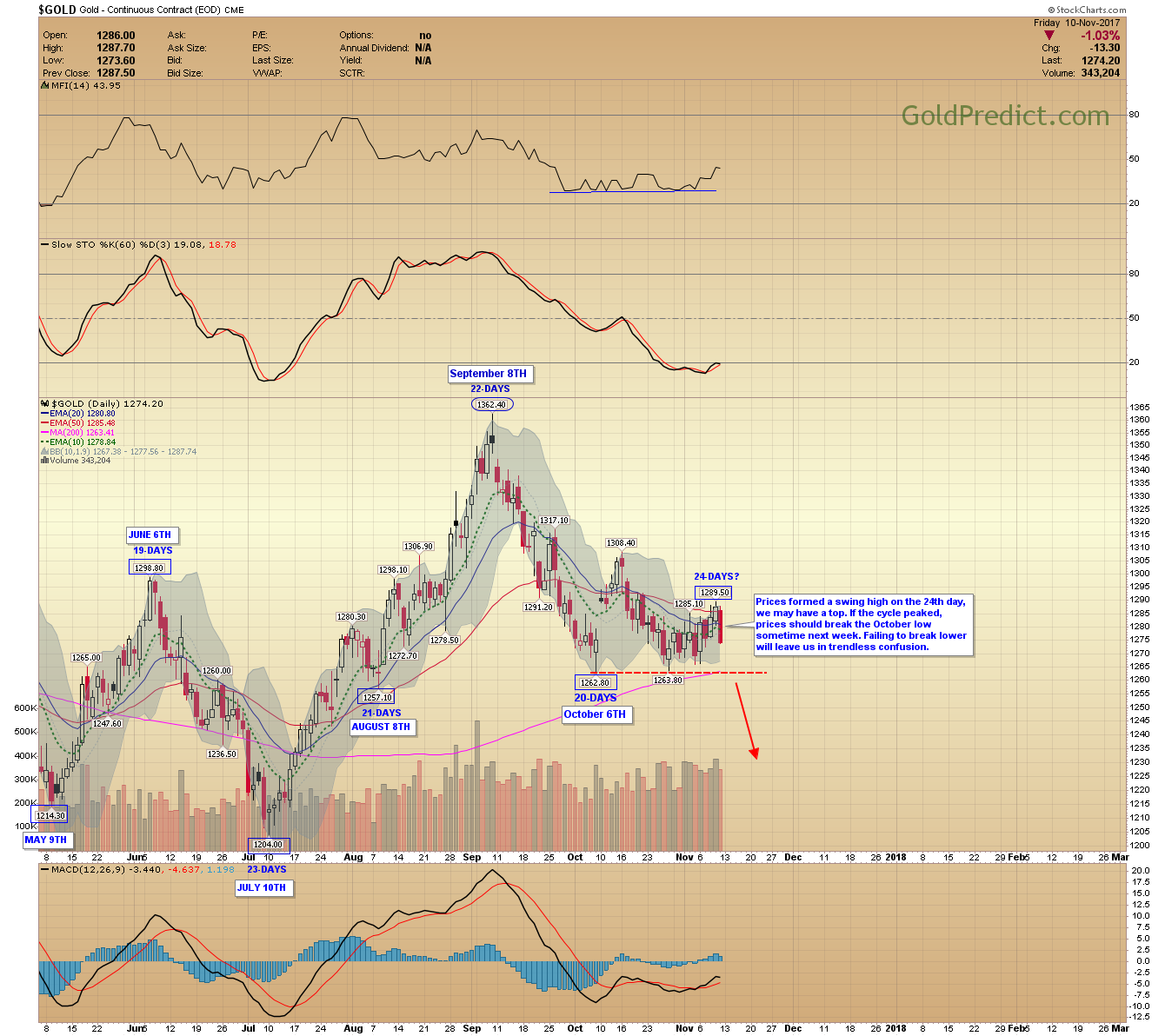 -GLD “DEJA VU” CHART- The 2017 price structure is very similar to that of 2016. Breaking the October low completes the correlation. The framework dovetails nicely with the symmetrical “V” formation described in the weekly gold chart. 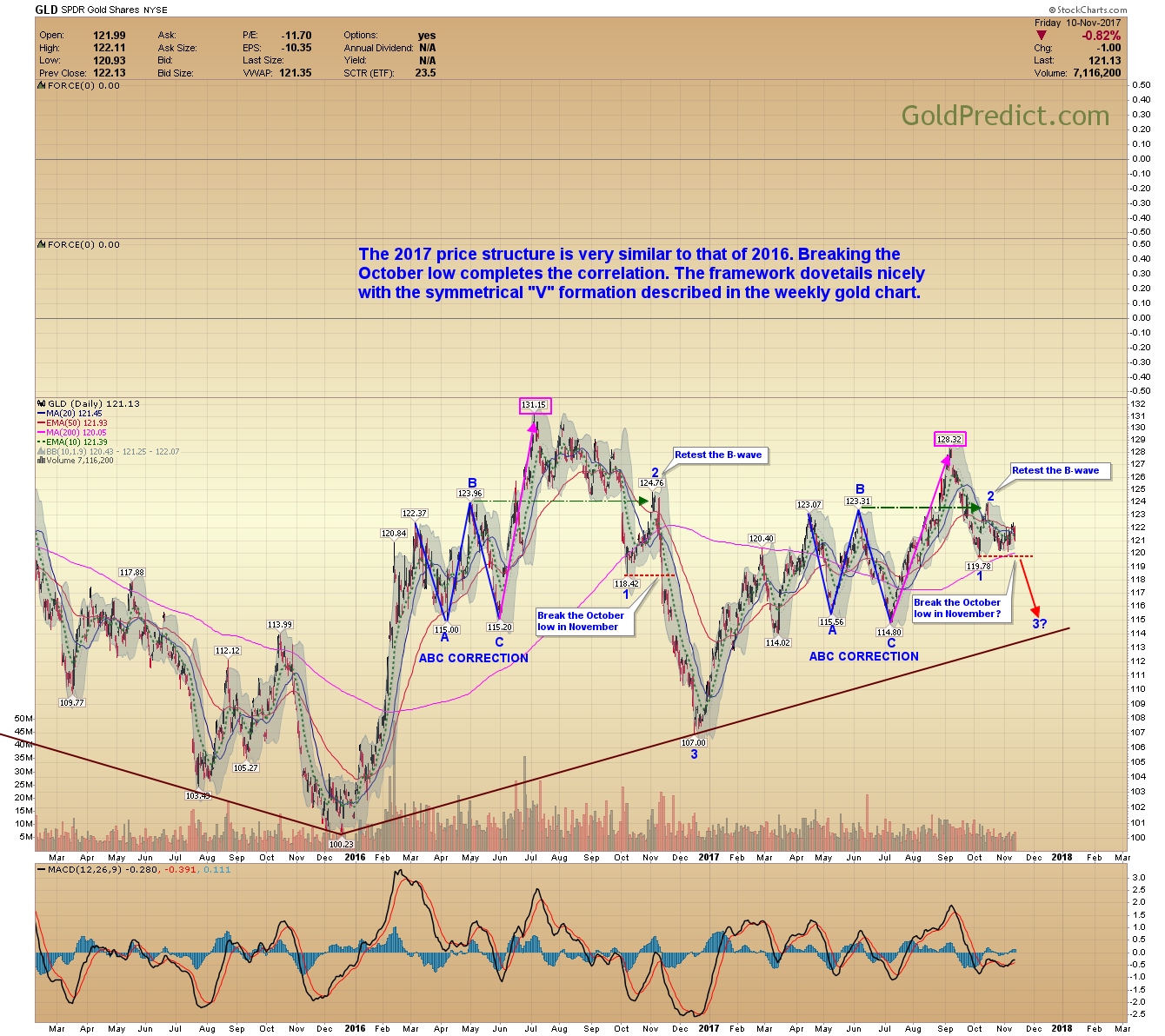 -SILVER WEEKLY- The weekly silver chart formed a bearish shooting star candle. The downside setup is there; we just have to see if prices follow through. 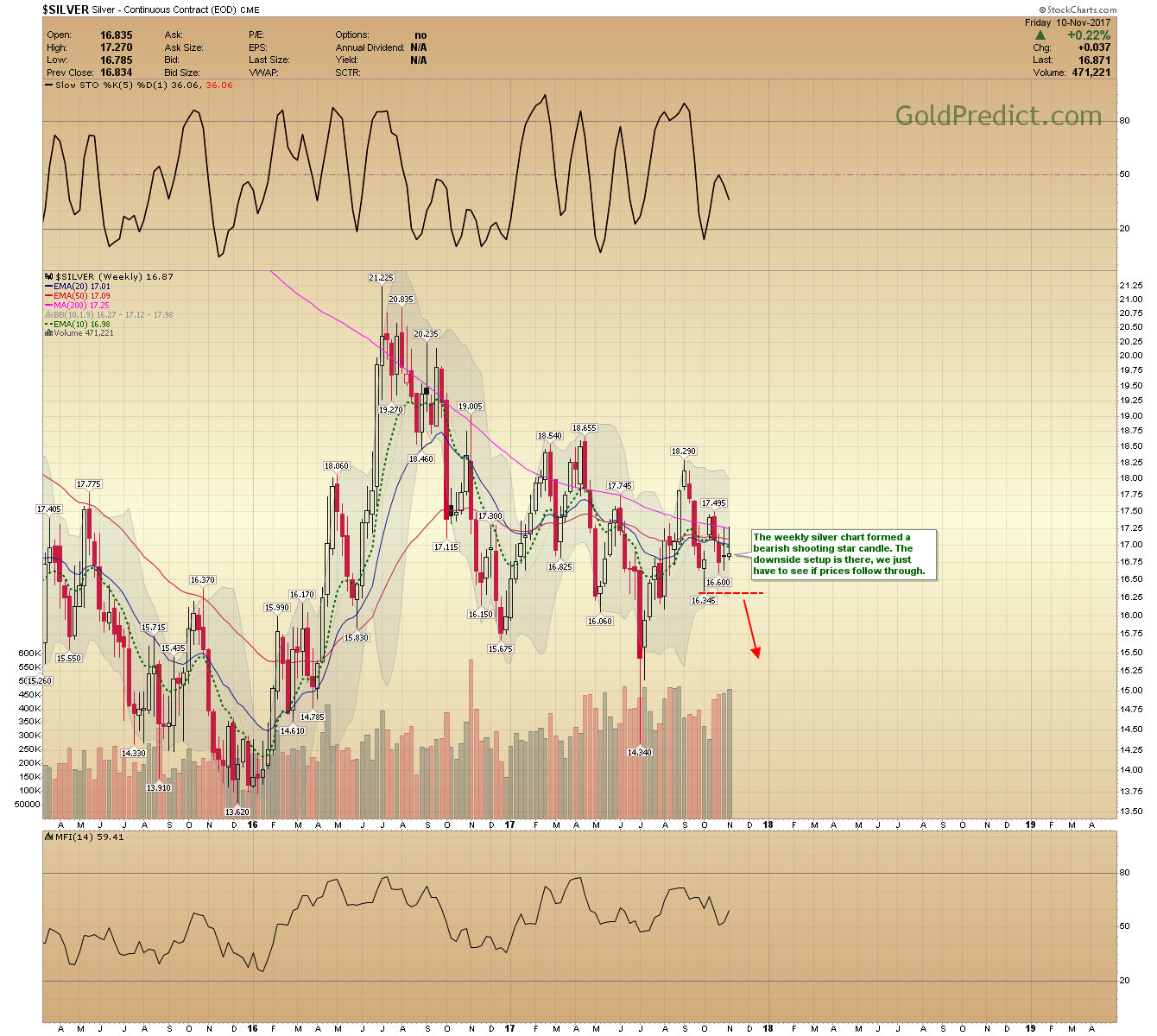 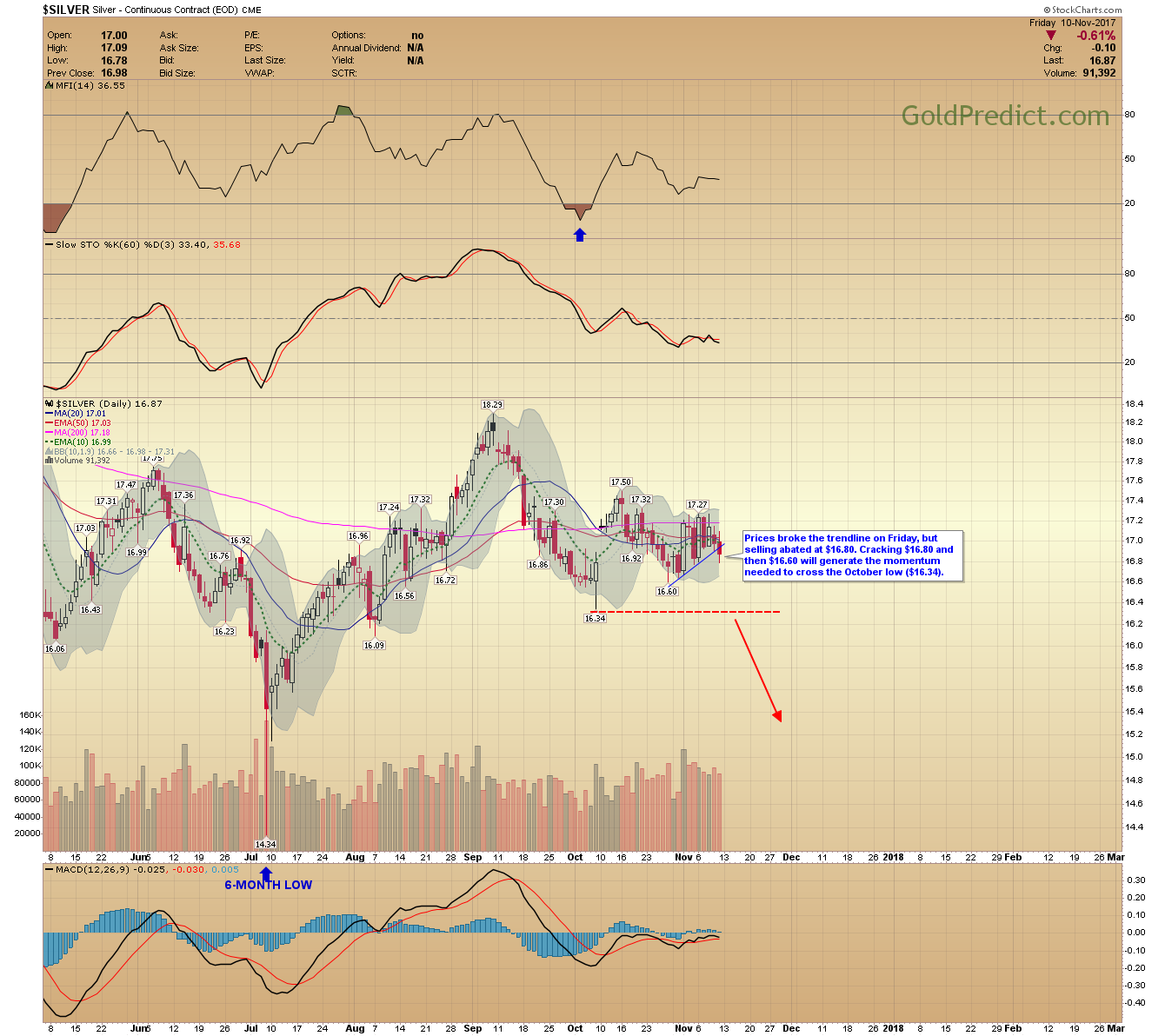 -GDX- Prices breached the 10-day EMA on increased volume. The structure is setup to the downside, all we need is some follow through. Breaking the $22.22 low will imply a retest of support at $21.00. 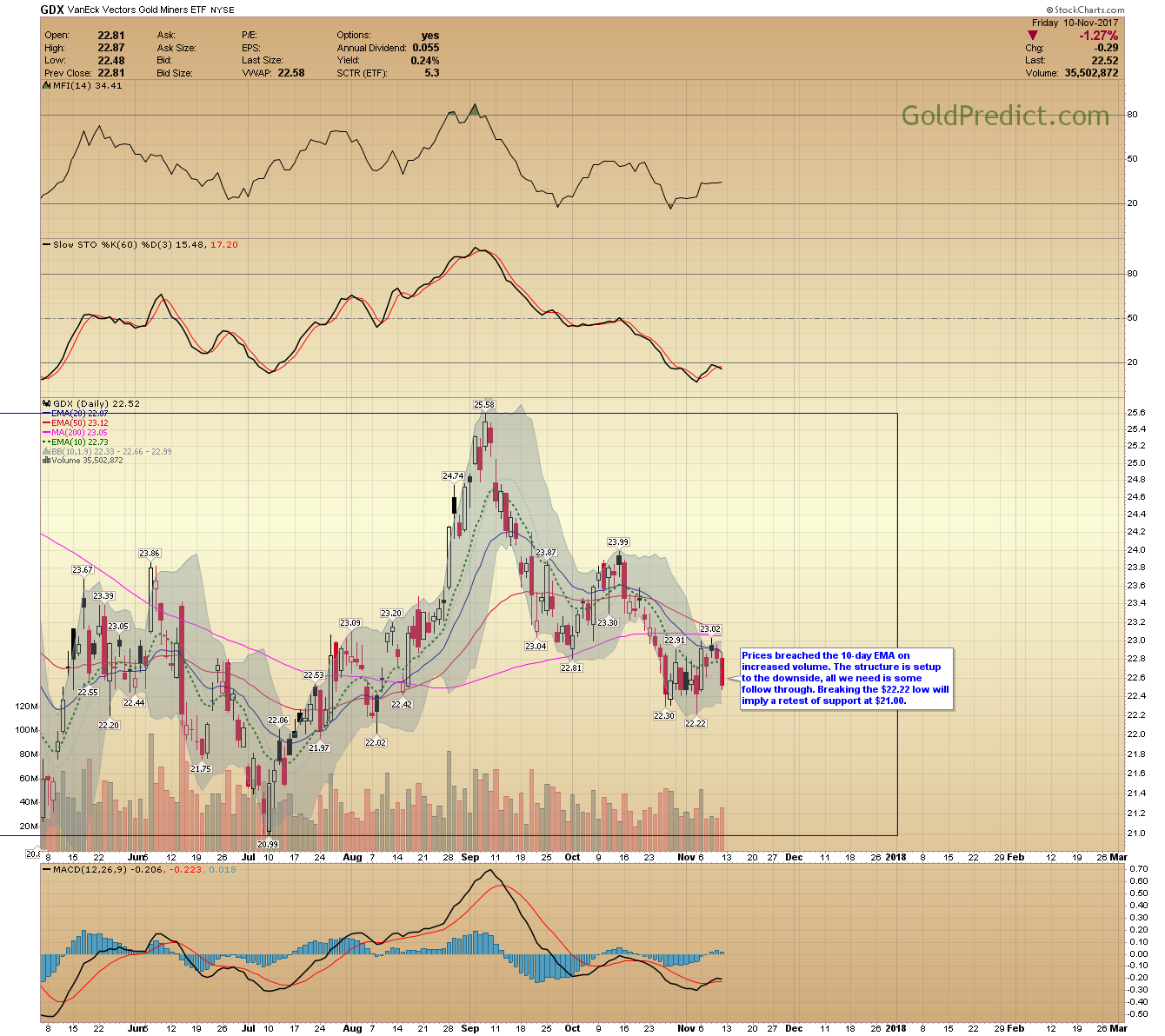 -GDXJ- Juniors closed below the trendline after a 10-day consolidation (similar to the previous rebound). Downside follow-through will confirm a breakdown and subsequent decline. 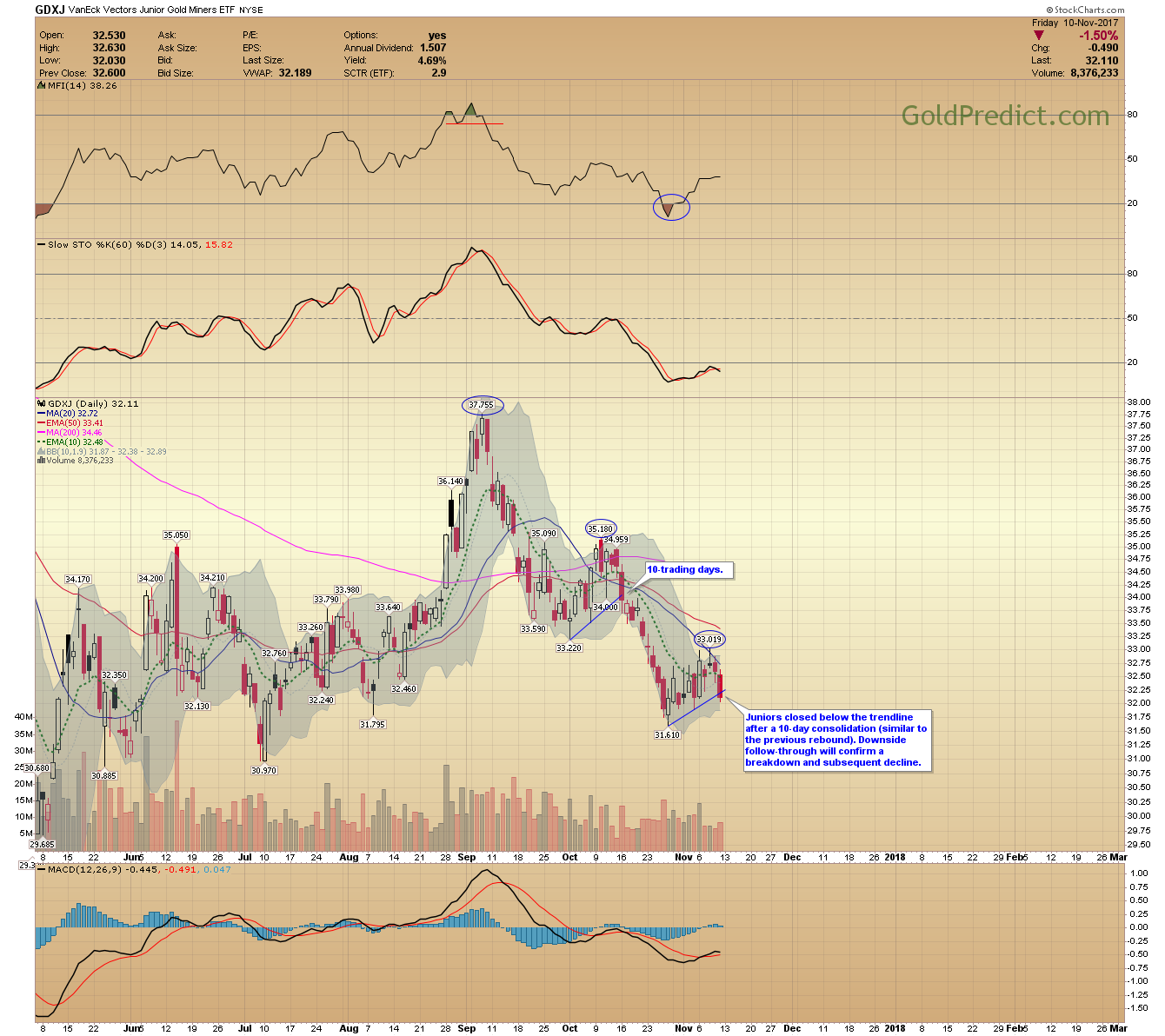 -SPY- The persistent grind higher continues. Prices would have to close consecutively below the upper trend channel to suggest a correction.

-WTIC- Oil is consolidating after breaking above $55.00. We could see one more push above $58.00 before prices correct. 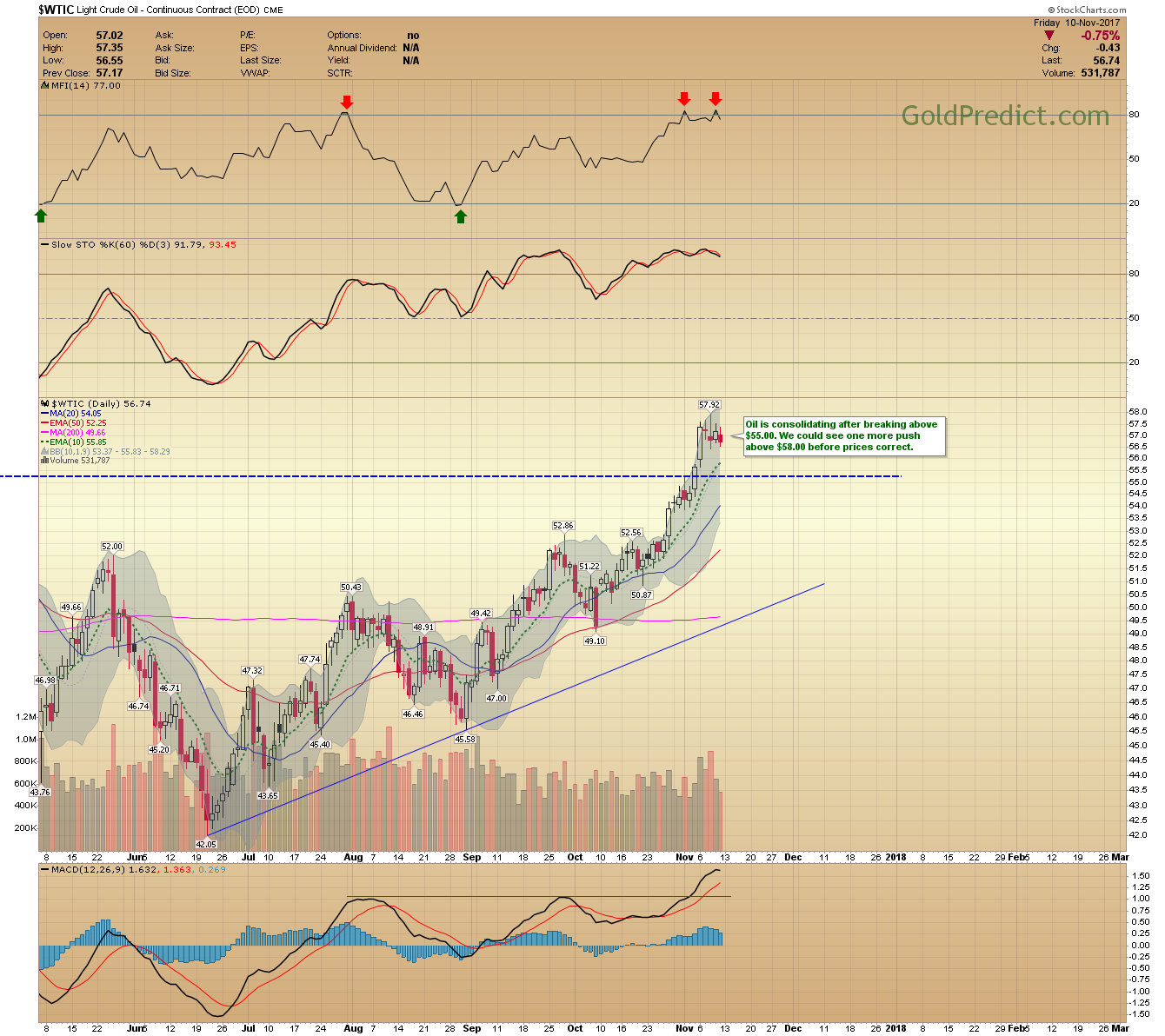 -ERX- Prices backtested the breakout. We could see another push above $32.50. If accomplished, I’ll sell the remainder of my position. To secure profits, I set a stop below Friday’s $30.60 low.

This article was published Posted on November 11, 2017 in Categories Weekend Newsletters