In this report, I cover a potential meme stock that meets 4 of my 6 moonshot criteria. I bought a little today for the Metals Portfolio, and I will release this information publicly tomorrow – Gold Predict insiders are getting the first-mover advantage.

To find a high-quality meme candidate, you need the following ingredients, in my opinion.

3) Ability to trade on Robinhood

5) An Underdog or Romantic Story

Below I discuss a silver stock that meets two-thirds of the benchmarks mentioned above.

Hycroft Mining History: The previous mine operator was Allied Nevada, which went bankrupt in 2015. Hycroft restructured and reemerged in 2019; prices dropped precipitously. The company is laying off workers and shutting down some operations. In all likelihood, they may go bankrupt (again). Prices have collapsed from $16.00 in 2020 to nearly $1.00. 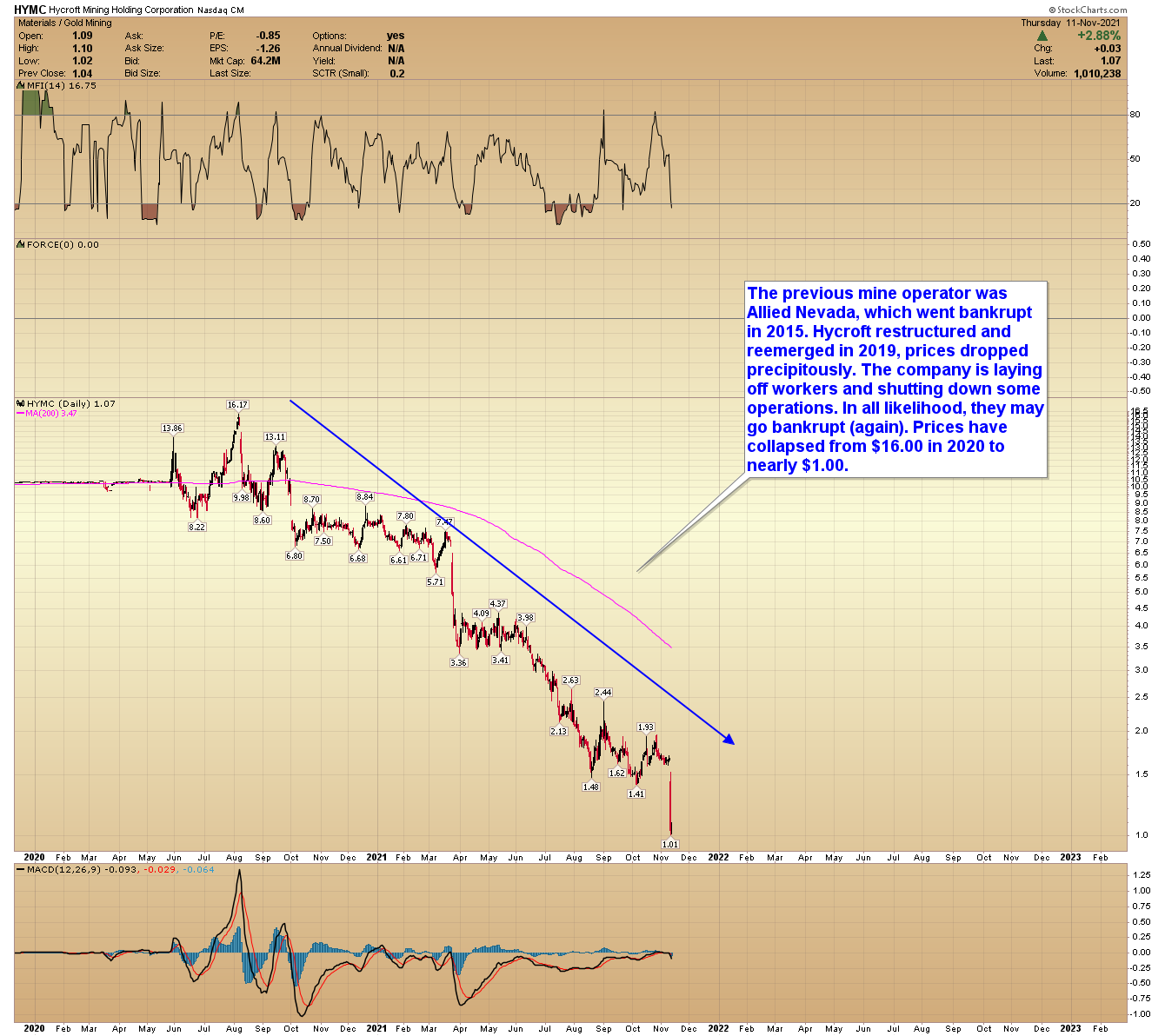 The stock is an absolute disaster, but it holds 4 of the 6 meme ingredients (see below).

1) SMALL FLOAT: According to Yahoo, HYMC has total outstanding shares of 60 million. Of that 60-million, 85% is held by institutions. I believe those institutions are part of the Allied Nevada settlement and won’t be selling until they reach a profit (likely above $16.00). So, that leaves about 9-million shares available for trading, according to quick math. 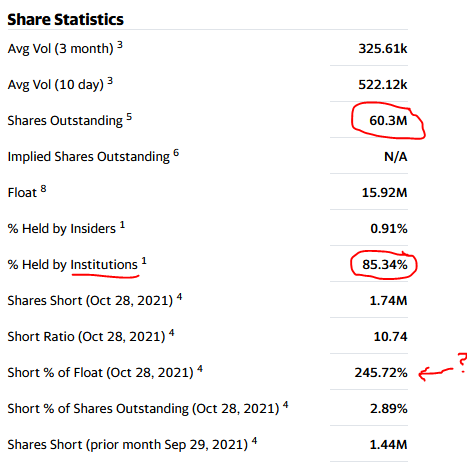 2) MARKET CAP: With a market cap of just $63 million, there is plenty of room for 10X returns.

3) ROBINHOOD: Hycroft Mining trades on Robinhood under the ticker HYMC.

5) UNDERDOG STORY (?): On the story side, HYMC reportedly has the largest silver deposit in America. Silver was in the spotlight briefly after GameStop. Silver is not only a monetary metal: it is critical to the new economy (from solar to E.V.s).

With yesterday’s news, HYMC appears to be nearing life support (like AMC and GME). Perhaps this story will evolve into an underdog narrative? Or maybe not.

In my personal portfolio, I bought HYMC at around $3.50 earlier this year. I bought a few warrants Wednesday and some HYMC stock for the Metals Portfolio today. Premium Members alerted first.

The Gold Cycle Indicator finished at 97. Note the 50-day EMA just crossed above the 200-day MA in daily spot (see gold chart below). The metals portfolio is moving back to a 20% cash holding. Once the 200-day turns up, it will drop to 10% cash.

-GOLD- After the initial breakout above $2000 in 2020, gold has been consolidating. I view the past 18-months as a coiled spring. The October CPI data may have released that energy. A breakout above $1875 could trigger a strong move higher. 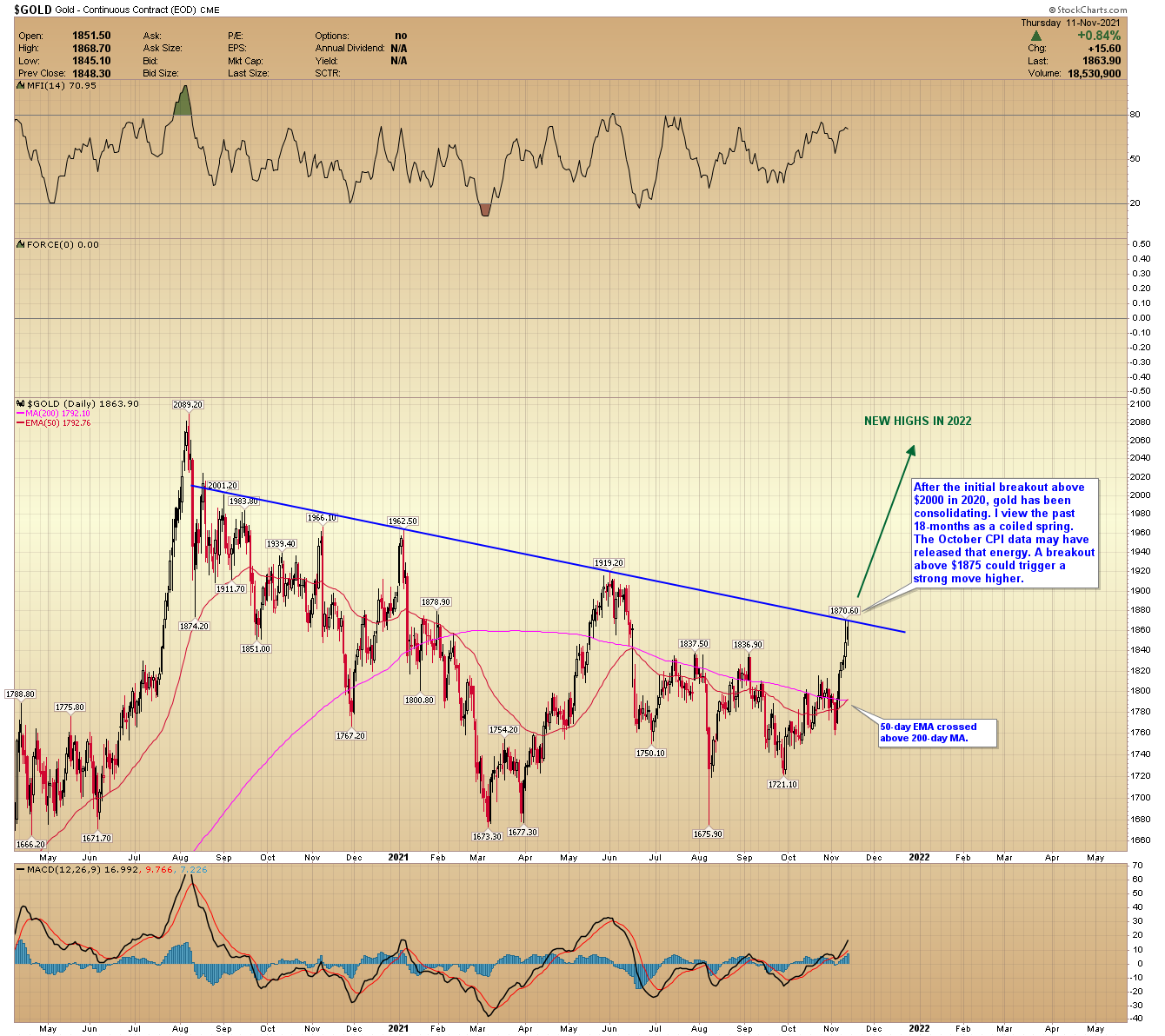 -SILVER- Silver closed above the $25.00 level, and we could see a breakout above the 200-day straightway. Upside follow-through above $26.00 would be very bullish, in my opinion. 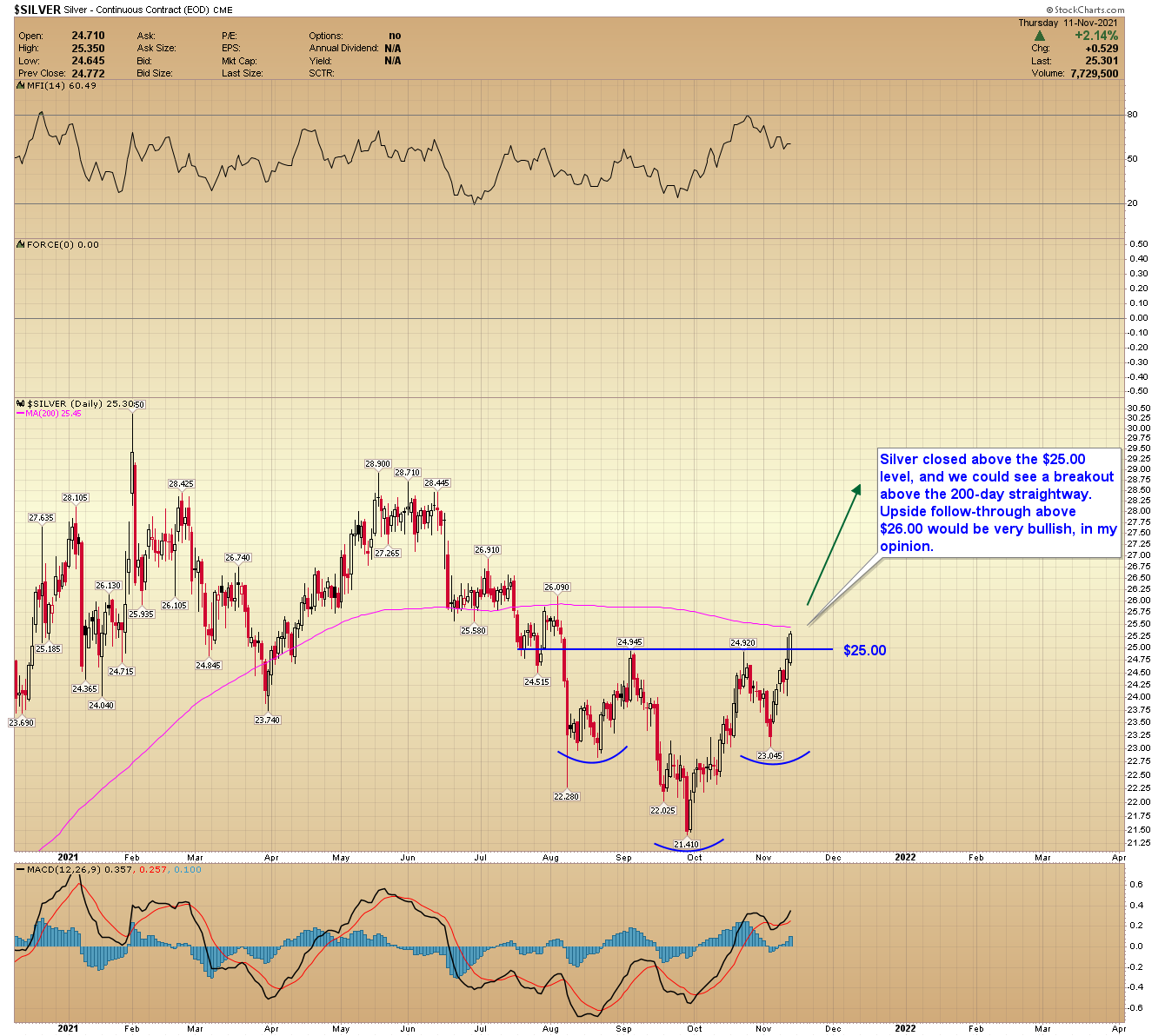 -PLATINUM- Platinum is trading just below the 200-day M.A., and a breakout above $1150 would signal a run to fresh highs. 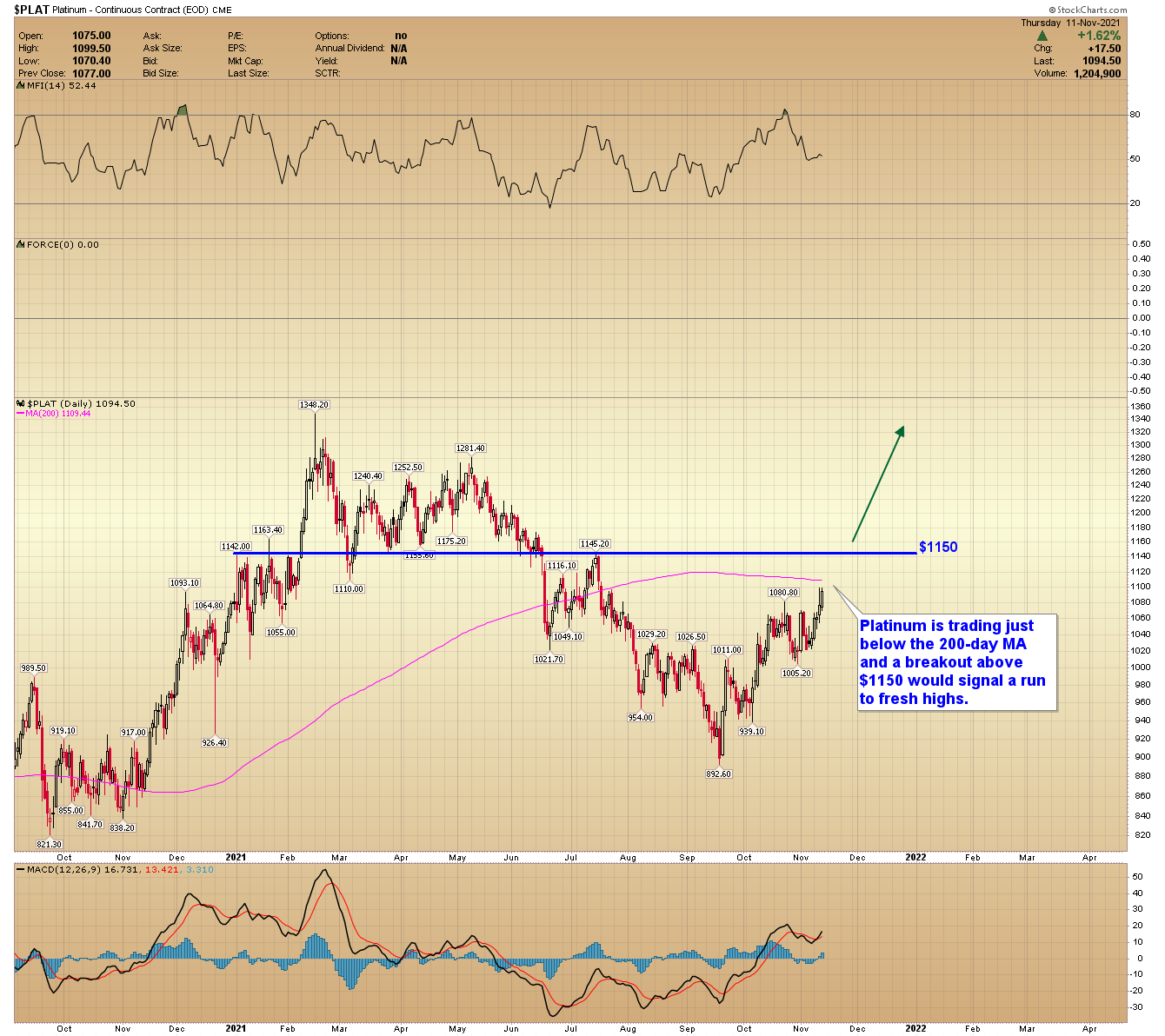 -GDX- As long as GDX stays above $34.00, I see the potential for a significant leg higher. 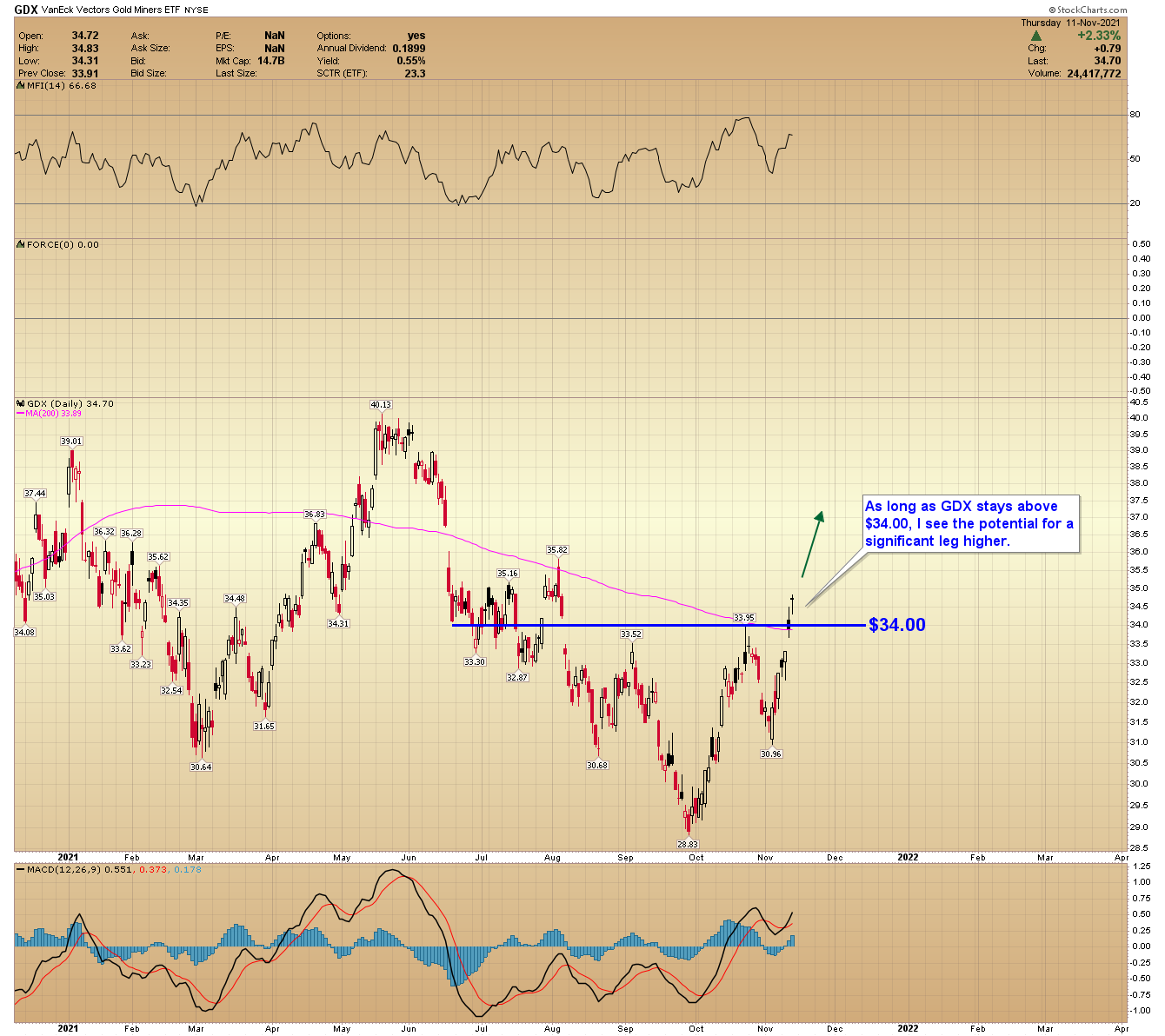 -GDXJ- Junior’s need to breakout above the downtrend line to establish the next leg higher. 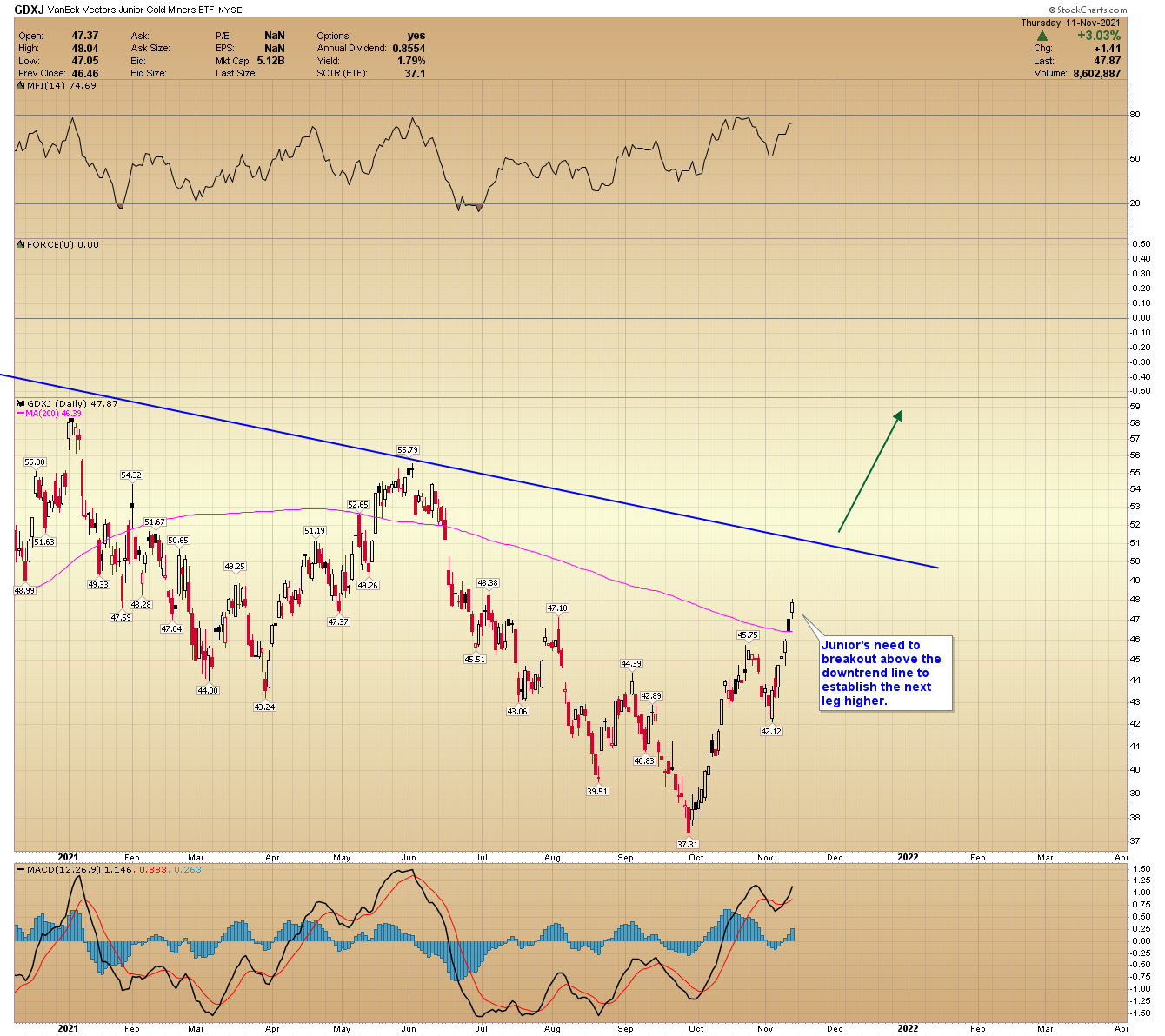 -SILJ- Silver juniors are above $14.00 and could accelerate sharply higher if prices break above the 200-day M.A. 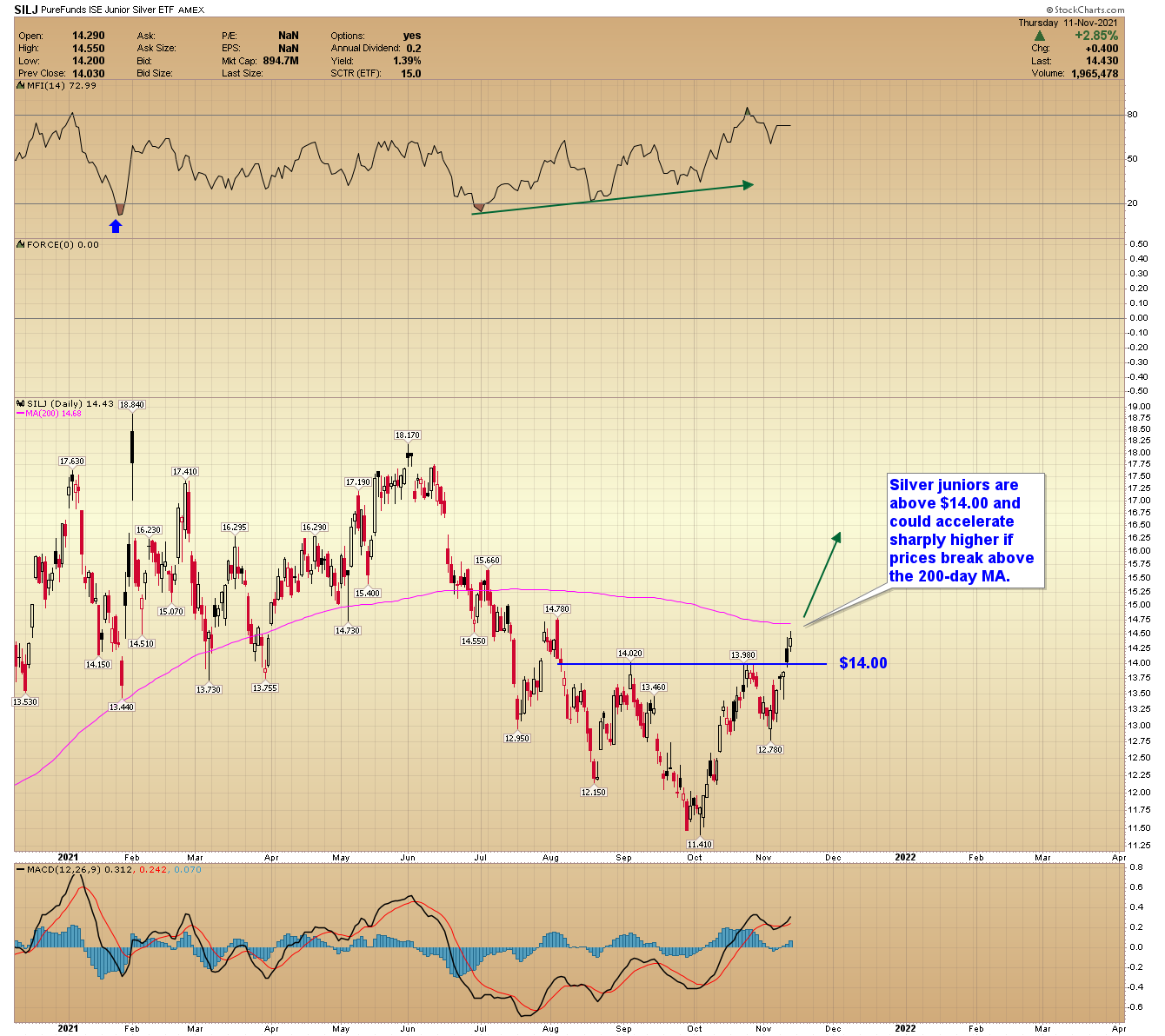 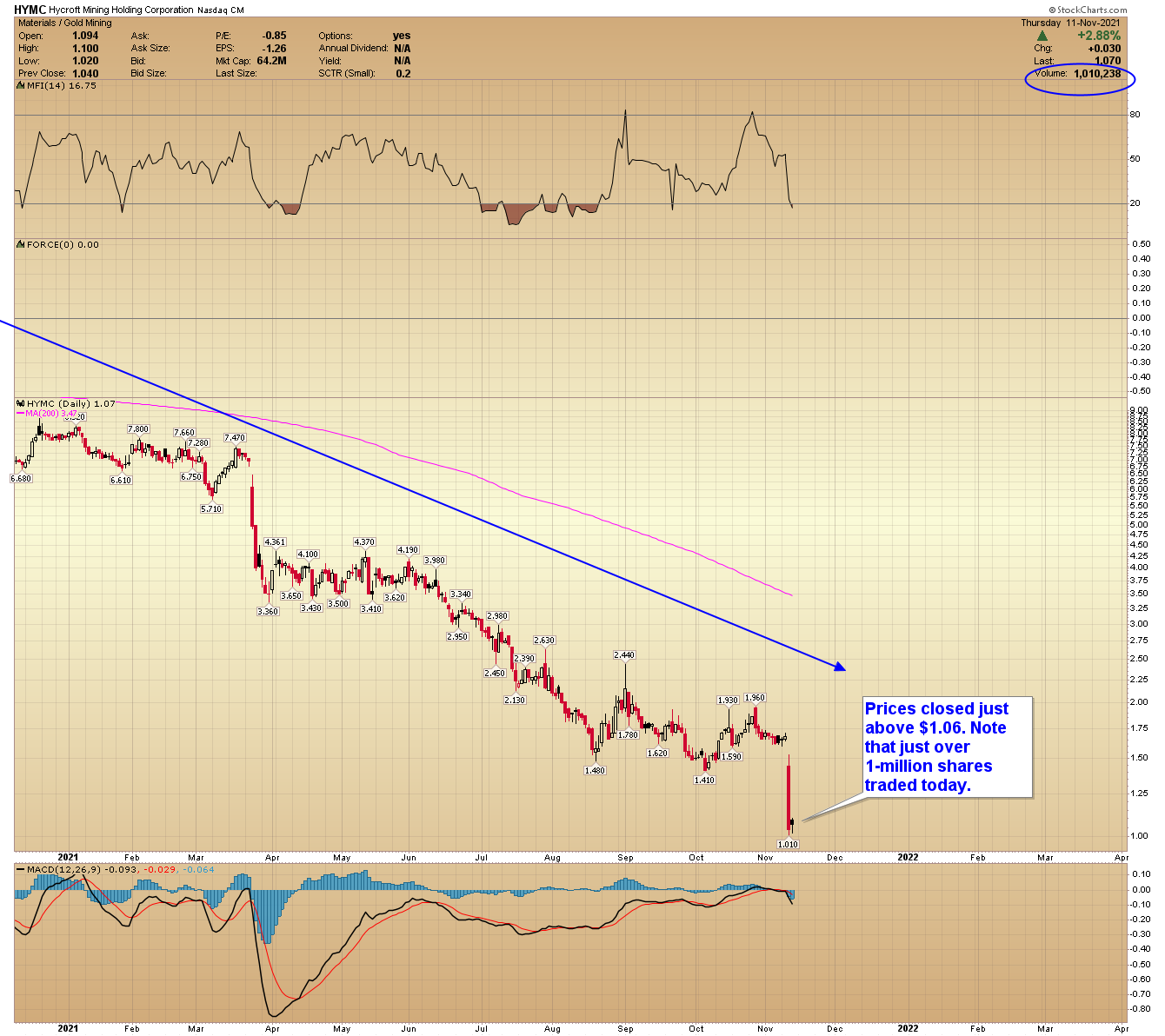 BITCOIN: With inflation raging and the Fed tapering, Bitcoin is struggling to get above $70,000. Dropping below $60,000 would be an ominous sign. 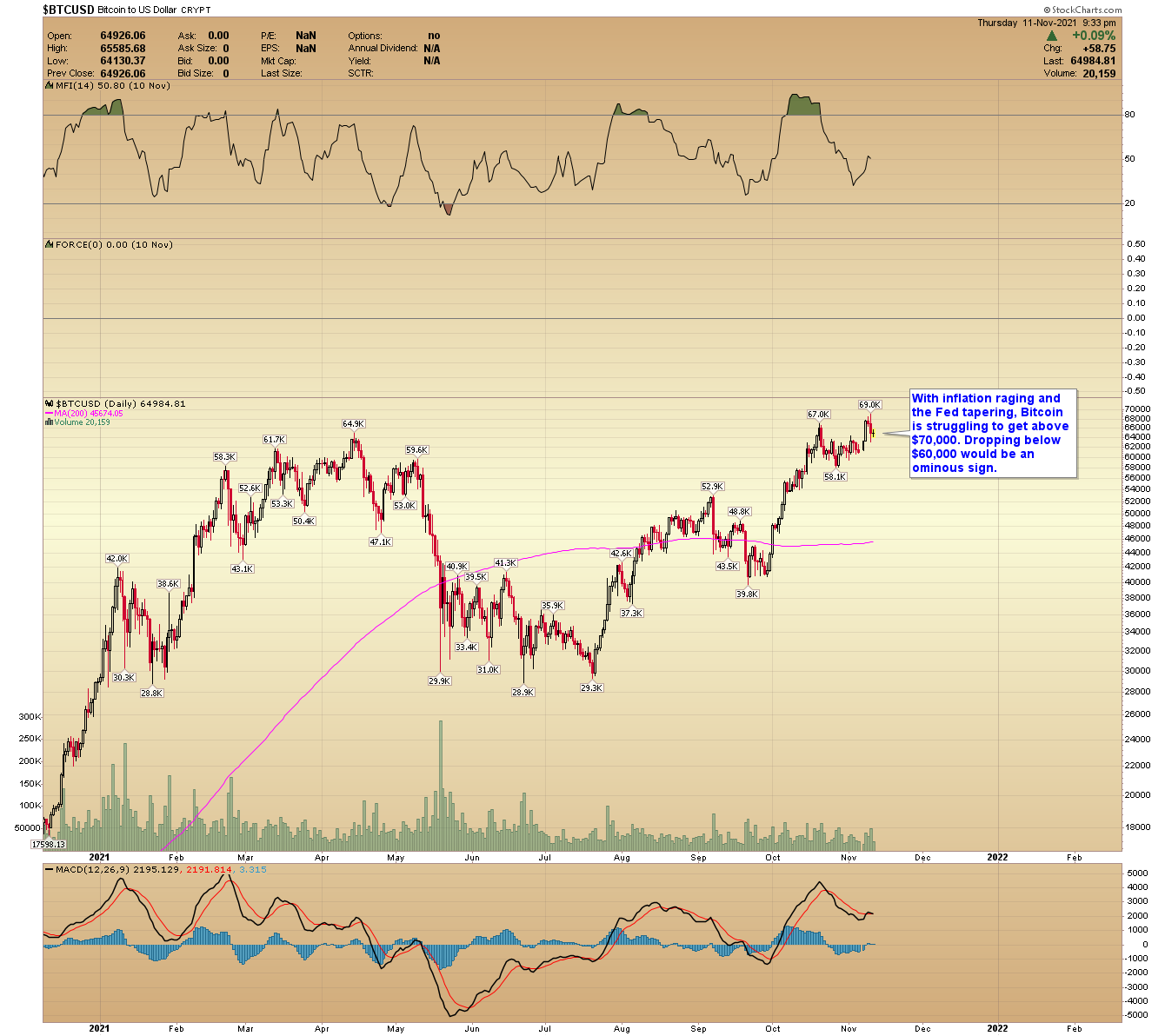 This article was published Posted on November 11, 2021 in Categories Free Updates, Updates